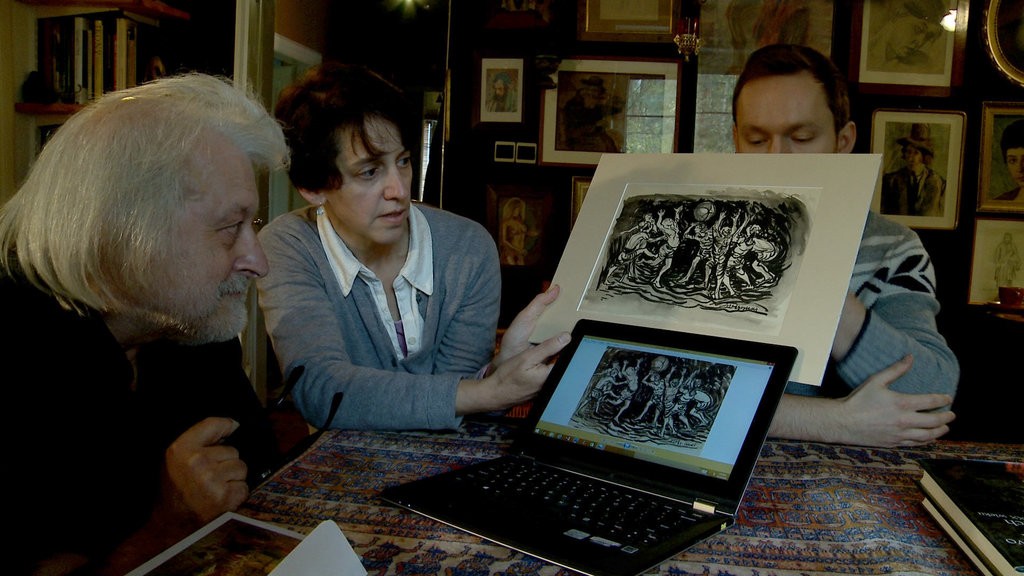 Elizabeth Rynecki and Edward Napiórkowski, an art collector, as seen in "Chasing Portraits," a documentary film directed by Ms. Rynecki.

“Chasing Portraits” is about a search. Yet the most affecting parts of this documentary come with the realization that some things may never be found.

Elizabeth Rynecki, here directing her first feature, grew up surrounded by paintings made by her great-grandfather Moshe Rynecki, who died in 1943 in a concentration camp. He produced about 800 pieces in his life, many of them scenes from his Jewish community in Poland. His works were scattered during the war; dozens are now in museums, others are in private collections.

Ms. Rynecki has endeavored for years to catalog the art works, and this film follows her to Canada, Poland and Israel as she tracks down several of them and speaks with, or is rebuffed by, their current owners.

Her investigations are interesting, especially when questions arise over possibly looted art. But as she encounters obstacles to learning more about Moshe and his paintings, the scenes turn increasingly poignant. Her interviewees’ memories are flawed or fading; stories are misremembered or withheld, or lost to the passage of time. She herself regrets not asking her grandparents more questions about their Holocaust experiences while they were alive. Her father has fewer qualms — he says that his painful past is best forgotten.

“Chasing Portraits” is small and subtle, with some missed opportunities and occasionally inexpert filmmaking. But it’s not an insignificant effort, and Ms. Rynecki’s cause is admirable. “The survivors will one day all be gone. And the history will grow a bit fainter, a bit more difficult to see,” she says. For her family, though, there is a measure of solace. “The paintings are survivors, too. And they speak volumes of a world that once was.”