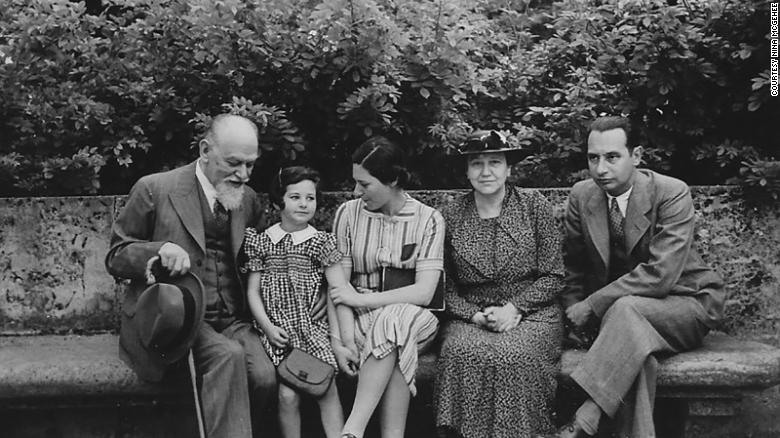 German-Jewish art dealer Siegfried Laemmle, left, was forced to dissolve his business under the Nazi Party. Now, his descendants are getting a small piece of it back.

Nina McGehee always knew that her family fled Europe before World War II broke out. But she only recently learned about what they left behind.

McGehee's great-grandfather, Siegfried Laemmle, was a German art and antiquities dealer with a successful business in Munich. He was also Jewish, and like all Jewish art dealers in the Third Reich, he was forced to liquidate his business as part of the "Aryanization" of businesses. 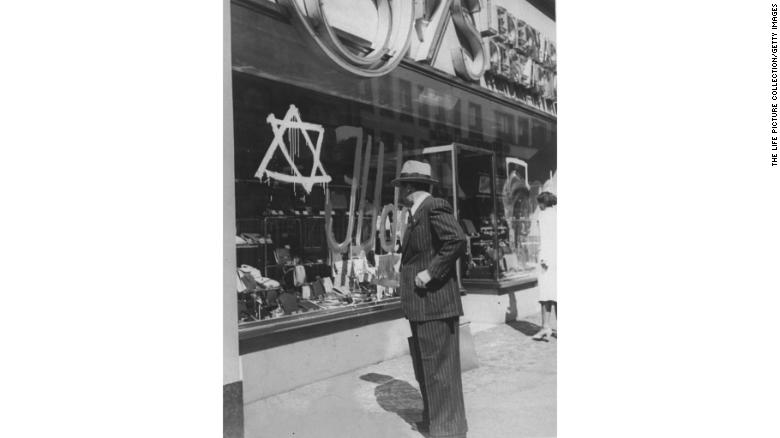 Before they had to give up their businesses, Jewish merchants in the Nazi era had to mark their stores with a Star of David and word Juden, which means "Jews."
Some Laemmle objects ended up in private collections, others in museums. Most were sold through a Munich auction house under the guise of legitimate sales.
Now, the current head of the auction house is helping return those objects to their rightful owners, including McGehee's family.
A common estimate for the number of works of art looted in the Nazi era is 600,000 with at least 100,000 still missing.
Often, in the process of restitution, the burden is on families to prove an object was sold because of Nazi persecution. That's starting to change as countries and institutions strengthen their commitments to researching the provenance of objects in their possession and making that information publicly available.
A central database contains an estimated 25,000 missing, looted or identified objects -- paintings, drawings, antiquities -- from more than 15 countries.
But Neumeister Auctions in Munich appears to be one of few private art dealers in the world taking the work upon themselves.
"I'm not responsible for what happened in National Socialism (Nazism), but I'm responsible for what I'm doing now -- or especially what I'm not doing," said managing director Katrin Stoll, who took over the business in 2008.
"As a German business, we have a social responsibility to do this."
Stoll and McGehee shared their story this week at the University of Denver's Center for Art Collection Ethics, where McGehee recently audited a class on provenance research. Toward the end of the semester, McGehee revealed to the professor her connection to the subject. 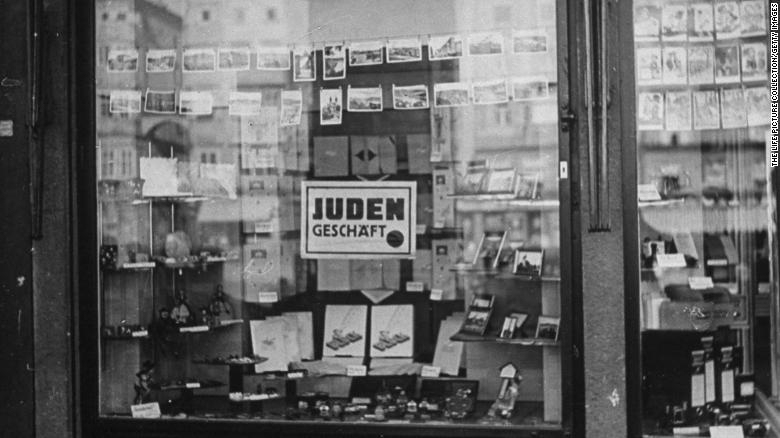 Nazi law required Jewish merchants to post signs saying their businesses were Jewish-owned.
"It's a wonderful success story that shows the benefits of the kind of research that we're trying to promote," said associate professor Elizabeth Campbell.
"It's an excellent example of how provenance research can help families achieve belated justice as well as strengthen human connections within one family and across continents."
McGehee says the restitution process opened her eyes to a chapter in her family's history that her parents seldom spoke of, eager as they were to leave it in the past.
"I didn't know anything about the family business or that my great grandfather was considered one of the top-of-the-line dealers," McGehee said in a phone interview. "It just wasn't something my parents ever discussed."

What happened to the Laemmle collection?

McGehee's journey to the truth began with a German documentary that includes her family's story. 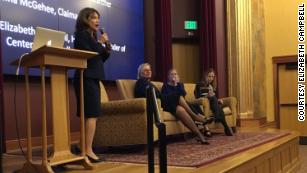 University of Denver associate professor Elizabeth Campbell, left, leads a screening of "Under the Hammer of the Nazis" with Katrin Stoll, Nina McGehee and Meike Hopp.
"Under the Hammer of the Nazis" recounts Stoll's efforts to right the wrongs of a key figure in the trafficking of Nazi-plundered goods in Bavaria. The documentary was screened at the University of Denver event that included McGehee, Stoll and the researcher who reviewed Neumeister's files, Meike Hopp.
Art dealer Adolf Weinmueller was a Nazi party member who directed the pilfering and sale of the Laemmle collection, among others in Bavaria, for the Reich Chamber of Fine Arts, which oversaw the liquidation of the Jewish art trade.
Adolf Hitler intended for the artifacts to end up in the Führermuseum, an unrealized art museum in a planned cultural complex for his hometown. Hitler had first pick of the looted objects, according to the film, but most of them went into private ownership through auction.
Siegfried Laemmle was 73 when the order came to liquidate his collection. A respected dealer and collector, he had been running his business in Munich since 1894, specializing in late medieval and early Renaissance sculptures.
Laemmle and his son Walter tried to convince authorities of their professional qualifications and commitment to German culture. But they quickly realized they had no choice but to dissolve the business. 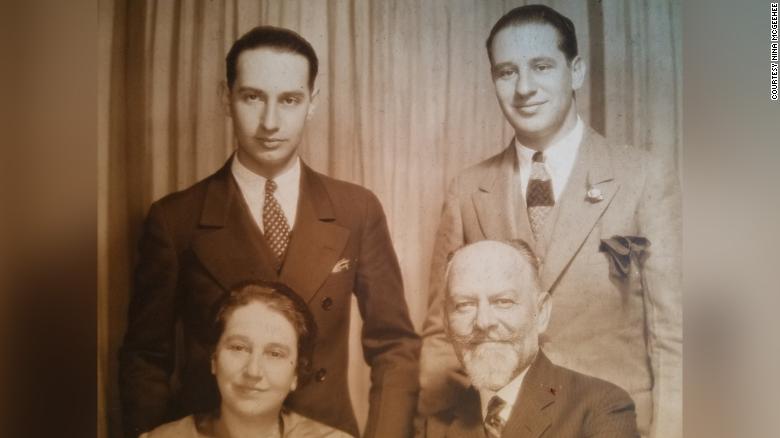 Siegfried Laemmle, bottom right, was a successful art and antiquties dealer before the Nazi regime forced him to liquidate his business.
Laemmle sold off as much as he could before immigrating with his family to California, where his brother, Carl Laemmle, the founder of Universal Studios, lived. The rest eventually fell into Weinmueller's hands as the person overseeing the liquidation of the region's Jewish art trade.
With the Laemmles and other Jewish competitors gone, Weinmueller's business flourished as he auctioned off their plundered objects.
Just how many objects passed through his auction house, or where they went, was a mystery until the past decade, when a discovery in the auction house basement shed light on the inner workings of Weinmueller's business.

How an auction house found them

For years after the war's end in 1945, historians knew Weinmueller was an agent of the Nazi party. But without records, they had no way of enumerating the nature of his misdeeds, let alone prove them. He was allowed to keep his business until his death in 1958, when German businessman Rudolf Neumeister took over the business.
In 2008, Neumeister's daughter, Stoll, took over. Knowing what she did about Weinmueller's reputation, Stoll decided to give the business a fresh start under her tenure.
"I couldn't explain what I was searching for, I just had a feeling there was a history with Weinmueller, but nobody could give me answers," she said.
Ten years earlier, 44 countries committed to the Washington Principles on Nazi-Confiscated Art, a set of principles that charged participating nations with returning Nazi-confiscated art to their rightful owners. But the principles were nonbinding, and no formal framework was created to help governments or private entities take up the task. 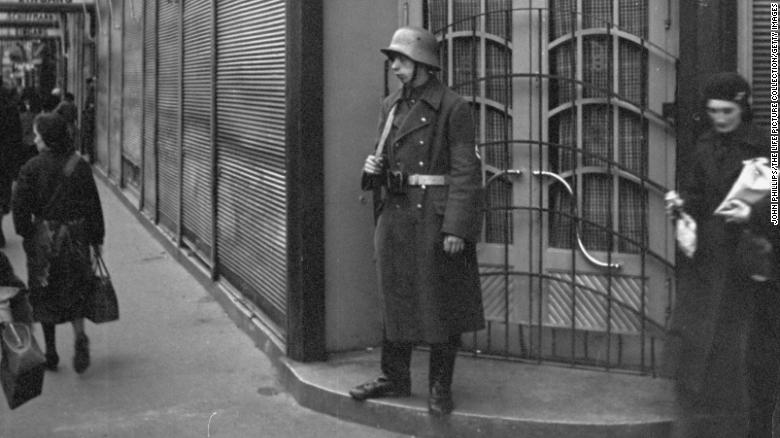 A guard stands outside Schiffmann's department store, a Jewish business, after it was taken over by the Nazis.
Stoll hired provenance researcher Meike Hopp to create a system to investigate the sales.
During her research, the pair made an unexpected discovery in the basement of the auction house: bundles of auction catalogs filled with notes in Weinmueller's handwriting.
The level of detail in the catalogs was like nothing that had been discovered before, Hopp said. The catalogs included the names of Jewish art dealers or businesses, descriptions of their objects and the buyers.
In one auction alone, according to Weinmueller's catalog, 159 hand drawings and graphics that once belonged to Laemmle were sold.
The pair digitized the annotated catalogs and published them in 2014 on Lost Art, a database of Nazi-looted objects. Finally, the nature of Weinmueller's misdeeds was laid bare.
"He was one of the main figures to catalyze the process and support the Nazis in its activities against Jewish art dealers," Hopp said. And he was one of the main profiteers, she said, because he received the private collections and belongings Jews were forced to leave behind when they fled the country.

An object returns to its owner

McGehee says she knew that her family had artifacts in Europe. Her parents, who lived in Minneapolis, first got involved in restitution efforts in the early 2000s, while she was in Denver, tending to her own family and career.
Her great-grandfather died before she was born, and her parents rarely spoke of him. Without knowing anything about Siegfried Laemmle's life or business, she says she assumed the disputed objects were personal effects.
Never in her wildest dreams would she have believed they were part of a massive collection culled from medieval estates and Bavarian courts, among other locales distant in time and place.
She also knew that her parents were interviewed for the documentary, which aired in 2013 on German television. But she was not there for the interviews and she did not watch the documentary until 2016, after it was translated into English.
She was floored by what she learned.
"That was my introduction to my family history. I watched it four to five times just thinking, 'what?' This is my mother's grandfather and I had no idea," she said.
"I couldn't grasp it at first. It didn't register, which is why I watched it so many times."
By then, her family had already received restitution from a museum in Vienna, where Austrian law compelled them to reach out. The discovery of the Weinmueller catalogs at Neumeister revealed more objects in museums in Germany, and her family began efforts to claim them.
Ultimately, the museums offered to buy most of the items or sell them at auction, she said. The remaining items, antiques and household items of little value, were up for grabs if McGehee wanted them. So she traveled to Germany in last year and came home with a marble plaque. She met Stoll and Hopp and struck up a friendship.
It's nothing fancy, she says of the plaque that now sits in her home.
"Just a marble thing that says Mr. and Mrs. so-and-so live here," she says. "Really heavy."
But to McGehee and the others involved, it shows that it's never too late for justice. Or the truth.