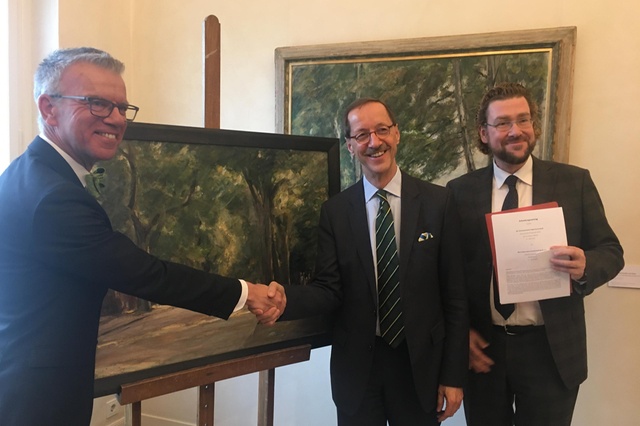 The Swiss government has donated a painting by German Jewish artist Max Liebermann to the museum in his former home in Berlin, after years of dispute over who owns it and whether Switzerland has the right to give it away.

The 1923 painting, “Grosse Seestrasse,” depicts the road lined with oak trees near the villa on Berlin’s Wannsee lake where Liebermann spent his summers, a scene he painted about a dozen times. For decades, it hung in the office of the Swiss ambassador in Berlin – but no one could quite remember how it got there.

“It was only in the 1990s that we found out that this painting was bought privately,” Paul Seger, the Swiss ambassador to Germany, said in a handover ceremony at the Villa Liebermann.

The painting was purchased at the Berlin auction house Leo Spik in 1948 by Francois de Diesbach, at that time the top Swiss diplomat in Germany. De Diesbach hung it in his office. The year after the purchase, he died in a sailing accident on the Wannsee.

His British widow was in her home country at the time of his death. She sent a list of his possessions that she wanted to be sent to her. The Liebermann painting was not among them.

The painting remained at the embassy and its origins were forgotten. “His death was sudden and unexpected,” said Seger. “And there are not many documents from that time at the embassy.”

Looted by the Nazis?

Progress in Switzerland has been patchy since it agreed to encourage museums to identify Nazi-looted art.

But in the 1990s, embassy staff grew concerned that the work may have been looted in the Nazi era. Liebermann was a Jewish artist who suffered under the Nazis. In 1933, he was forced to step down as honorary president of the Academy of Arts. He died in 1935, and after his death, his villa and property were seized.

The Swiss government commissioned Ina Weinrautner, a provenance researcher, to look into the painting’s history. She obtained access to Leo Spik’s records and discovered the name of the previous owner, but couldn’t locate descendants to find out the circumstances under which it was sold.

"The case is not closed, but I got as far as I could,” Weinrautner said. “I couldn’t find any evidence that it was looted. I also can’t rule it out.”

De Diesbach, a descendant of an aristocratic Bernese family, had no children. But two distant relatives emerged to claim the painting. The Swiss government said it couldn’t respond to the claims until the relatives established between them who was de Diesbach’s rightful heir.

They didn’t manage to agree a position, said Francois Wisard, the head of the history unit at the Swiss Federal Department of Foreign Affairs. “We couldn’t give the painting to one of them and then risk a lawsuit from the other,” he said. “We had to find a long-term solution.”

So Wisard asked Marc-André Renold, a professor of art law at Geneva University, to examine the legal status of the apparently ownerless painting. Renold concluded that the Swiss government had gained legal title because it had possessed the painting for years in the belief that it was the rightful owner.

Seger’s predecessor, Christine Schraner Burgener, decided to donate the painting to Villa Liebermann, the privately funded museum that opened in the artist’s home in 2006. But when Renold informed de Diesbach’s distant relatives of her decision, one of them, based in Switzerland, was vehemently opposed.

Days before the scheduled handover on June 10 last year, the relative filed a preliminary injunction in Bern. The handover ceremony was replaced by one marking a long-term loan of the painting.

The High Court of Canton Bern dismissed the claim and confirmed the Swiss government’s ownership of the painting in 2018, allowing the donation, finally, to go ahead. The agreement between Villa Liebermann and the Swiss government includes a clause stipulating that if at any point it emerges that the painting was looted from Jews during the Nazi era, it will be restituted to the descendants of the original owner.

At today’s ceremony, Seger admitted to mixed feelings about parting with “Grosse Seestrasse.”

“I am sad to be the first Swiss ambassador who won’t have this painting in his office,” he said. “But of course we are glad that it will be accessible to a broader public.”

Daniel Spanke, the director of Villa Liebermann, said that while the museum wants to expand its collection, it “can only afford to buy Liebermann paintings in the rarest of cases”.