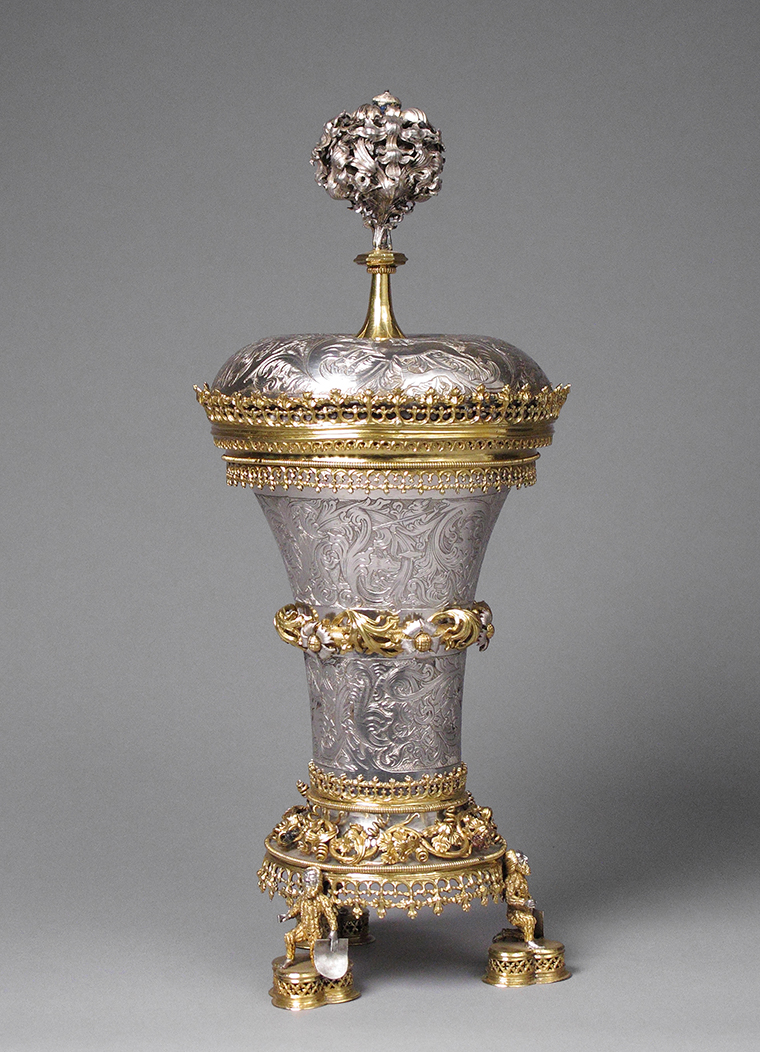 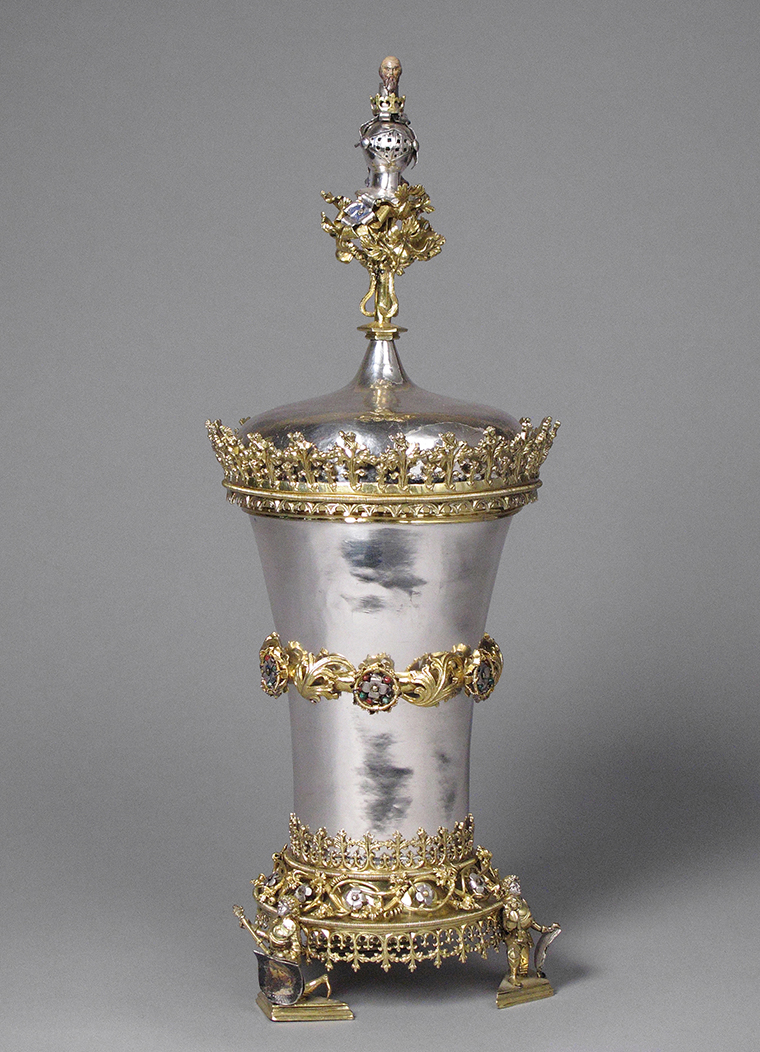 One of us (Katharina) is a museum provenance specialist from Frankfurt, Germany. The other (Christine) is a senior researcher in Medieval Art at The Met in New York. In February 2017, we met at the first German/American Provenance Research Exchange Program for Museum Professionals (PREP), which was held at The Met.

Katharina wondered whether Christine knew that the Museum owned a group of medieval works of art formerly in the Maximilian von Goldschmidt-Rothschild (1843–1940) collection, a well-known art collection assembled by a Jewish collector from Frankfurt am Main that had been confiscated by the Nazis during World War II. As part of her research, she was looking for a copy of a New York Times article that described how artworks from this collection had been sold at auction in New York in 1950.

Christine located a copy of the article, and we soon found ourselves involved in a scholarly detective story, tracing the history of two fifteenth-century medieval objects from their confiscation in 1938 until their acquisition by the Met in 1950, sixty-nine years ago. 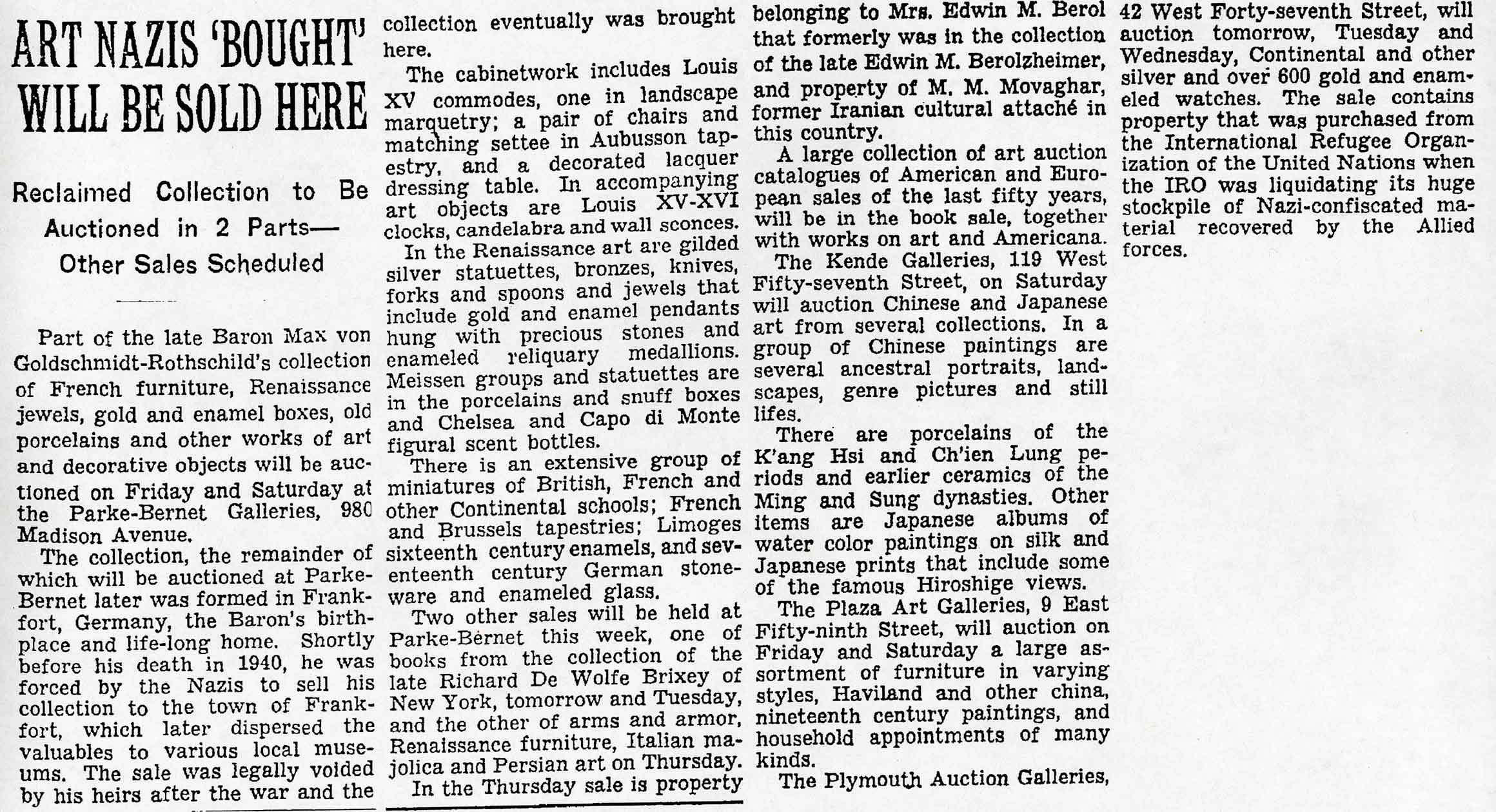 The New York Times article of March 5, 1950 ("Art Nazis 'Bought' Will Be Sold Here") announced that works reclaimed from the collection of Maximilian von Goldschmidt-Rothschild were soon to be auctioned at the Parke-Bernet Galleries in New York. The article explained that the auction was only possible because the collector's heirs had succeeded in voiding a 1938 forced sale of the collection to the city of Frankfurt under its acting Nazi mayor, Dr. Friedrich Krebs (1894–1961). This enabled the collection to be returned to Maximilian's heirs. In 1949, the works had then been shipped to the United States for sale, along with other treasures from the collector's estate, including Louis XV furniture, Renaissance works of art, and a collection of miniatures, tapestries, stoneware, and enameled glass. 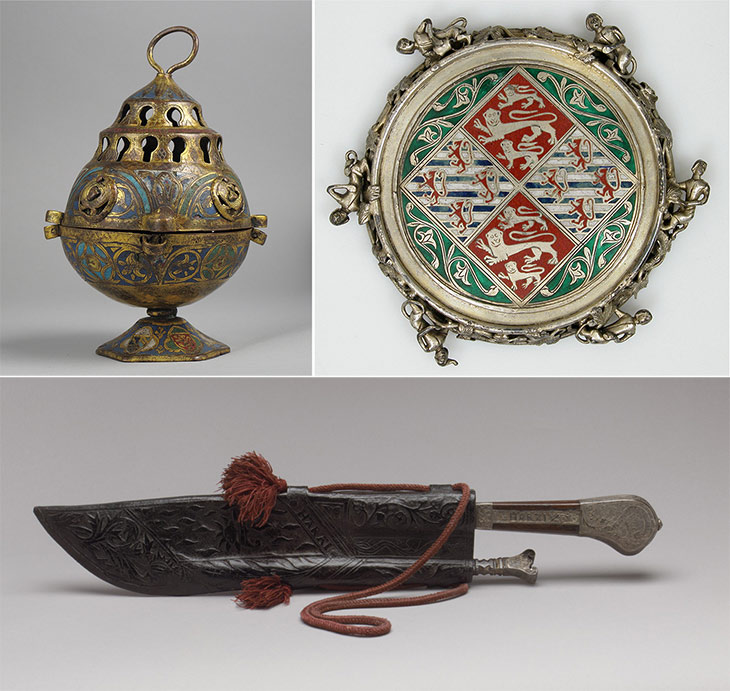 We noticed, however, that although The Met had acquired five medieval works from the Goldschmidt-Rothschild collection, it had not purchased them at the 1950 Parke-Bernet sale. Instead, it had acquired them from a dealer, Rosenberg & Stiebel, at their New York location. But this dealer had also not purchased these works at the auction, making the question of how and why these medieval works of art had been separated from the rest of the collection before the auction that much more intriguing.

The five medieval works that The Met purchased from Rosenberg & Stiebel included a thirteenth-century copper and champlevé enameled censer, as well as a mirror back and a hunting set with knife, sharpener, and sheath, both of which are now thought to date to the late nineteenth century, and all of which are at The Met (above). But the two most important works from this group were a pair of rare fifteenth-century silver, gilded silver, and engraved beakers, created in Ingolstadt, Germany.

The first is an engraved covered beaker, standing on three trilobed pedestals, with "wild men" holding blank shields perched at its feet. While the inhabited foliate engraving has been compared with decorative prints by Master E.S., a mid-fifteenth-century German goldsmith and engraver who signed his engravings with that monogram, scholars now consider this engraving to be modern, not medieval, and perhaps completed sometime in the nineteenth century.

The beaker has a couple of identifying marks. Located at the bottom of the vessel (not shown) is a rampant panther, the hallmark of the city of Ingolstadt's goldsmiths' guild. On the underside of the beaker's cover (above right) is an enameled plaque, also decorated with the Ingolstadt panther—the city's coat of arms—in blue enamel on silver with tongues of red flame. Although the work has no maker's mark, stylistic features suggest it was made by Hans Greiff (1470–1516), an accomplished goldsmith working in the vicinity of Ingolstadt.