Today, Russian-born art dealer based in New York Alexander Khochinsky will be released from France to head to Poland for a hearing concerning a painting Khochinsky claims to have received from his father. On February 25th, Khochinsky was detained by French authorities on behalf of the Polish government at Paris’ Charles de Gaulle Airport. Since his detention, he was released from custody but was under orders to remain in France until his hearing scheduled for later today. 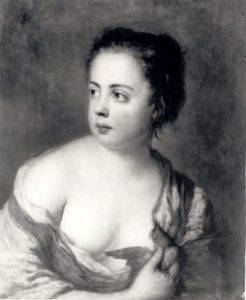 
Khochinsky, now an American citizen, was arrested as part on ongoing issues between he and the Polish government revolving around the ownership and history of Girl with Dove, a 1754 painting by Antoine Pesne. Today’s hearing is the second time that Poland has attempted to extradite Khochinsky.

The matter began in 2010 when Khochinsky says he discovered the dicey past of the painting that he was given by his father. At that point, he claims that he found out that the painting had once belonged to the Wielkopolskie Museum in Poznan before it was looted during World War II by Nazis. When Khochinsky discovered this, he contacted the museum to have the painting and its provenance authenticated. The painting is listed, along with about 63,000 other artworks, as a ‘lost’ cultural object by Poland’s Cultural Ministry.

It was then that Khochinsky alerted the Polish embassy in Russia about the painting and asked that in return for repatriating the painting, he would like to receive lands, which now are home to a Catholic Church, that belonged to his family in the city of Przemysl. Prior to World War II, Khochinsky’s family resided in the south-eastern Polish city before fleeing when Nazi troops took over during their 1941 advance towards the Soviet Union.

Following this a deal, however, was not reached. Poland upheld that Khochinsky had bought the painting and knew of its history and in 2015, US prosecutors complied with Poland to extradite Khochinsky and he was arrested in New York for possessing a painting stolen during the war. Though he was released on bail of $100,000, he remained under house arrest and was potentially facing 10 years in prison if convicted. In July of 2015, a US court denied Poland’s request for extradition due to lack of evidence. In June of 2018, Khochinsky filed a lawsuit against Poland for damages stating the attempted extradition ‘nearly destroyed his livelihood.’ At the time, the suit asked for repayment of his legal fees, compensation in regards to physical, mental, and financial stressors, and his family’s land in Przemysl.

Nicholas M. O’Donnell, Khochinsky’s lawyer, told ARTnews that ‘[t]he Polish government has known about this lawsuit for eight months now, they are ignoring it, and you’re not allowed to do that. [..] The first time Mr. Khochinsky had a problem traveling internationally was right after I told Poland that, unless they responded, we were going to seek default on the lawsuit. I don’t think that’s a coincidence.’