The Hunt for the Nazi Loot Still Sitting on Library Shelves

The hunt for the millions of books stolen by the Nazis during World War II has been pursued quietly and diligently for decades, but it has been largely ignored, even as the search for lost art drew headlines. The plundered volumes seldom carried the same glamour as the looted paintings, which were often masterpieces worth millions of dollars.

But recently, with little fanfare, the search for the books has intensified, driven by researchers in America and Europe who have developed a road map of sorts to track the stolen books, many of which are still hiding in plain sight on library shelves throughout Europe.

Their work has been aided by newly opened archives, the internet, and the growing number of European librarians who have made such searches a priority, researchers say.

“People have looked away for so long,” said Anders Rydell, author of “The Book Thieves: The Nazi Looting of Europe’s Libraries and the Race to Return a Literary Inheritance,” “but I don’t think they can anymore.”

Given the scope of the looting, the task ahead remains mountainous. In Berlin, for example, at the Central and Regional Library, almost a third of the 3.5 million books are suspected to have been looted by the Nazis, according to Sebastian Finsterwalder, a provenance researcher there.

“Most major German libraries have books stolen by the Nazis,” he said.

But researchers say there are signs they may be on the brink of making measurable progress in restitutions.

In the last 10 years, for example, libraries in Germany and Austria have returned about 30,000 books to 600 owners, heirs and institutions, according to researchers. In one instance in 2015, almost 700 books stolen from the library of Leopold Singer, an expert in the field of petroleum engineering, were returned to his heirs by the library of the Vienna University of Economics and Business.

“There’s definitely progress, but slow progress,” said Patricia Kennedy Grimsted, senior research associate at the Ukrainian Research Institute of Harvard University and one of the world’s foremost experts on the libraries and archives stolen during World War II.

Patricia Kennedy Grimsted of the Ukrainian Research Institute at Harvard is one of the leading researchers on tracking the millions of books that were stolen by the Nazis.CreditYakub Kolas Central Scientific Library of the National Academy of Sciences of Belarus 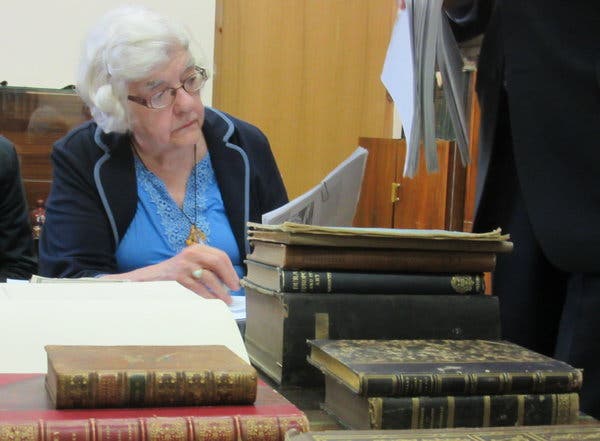 Patricia Kennedy Grimsted of the Ukrainian Research Institute at Harvard is one of the leading researchers on tracking the millions of books that were stolen by the Nazis.CreditYakub Kolas Central Scientific Library of the National Academy of Sciences of Belarus

The numbers alone often do not do justice to what a single returned piece of Judaica, or even a more prosaic volume, can mean to a family.

In Germany last year, the University of Potsdam library gave an important 16th-century volume back to the family of its owner, a man killed in a concentration camp in 1943. The book, written by a rabbi in 1564 and later looted, explains the fundamentals of the Torah’s 613 commandments. The owner’s grandson identified it from a list of looted works that had been posted online. Then he and his father, a Holocaust survivor, flew from Israel to Germany to retrieve it.

“It was quite an emotional experience for my father and myself,” said the grandson, David Schor.

Berl Schor, 91, and his son, David, 52, reviewing a 16th-century book once owned by Berl’s father, who died in a concentration camp. It was returned by a German university after David Schor spotted it online.| 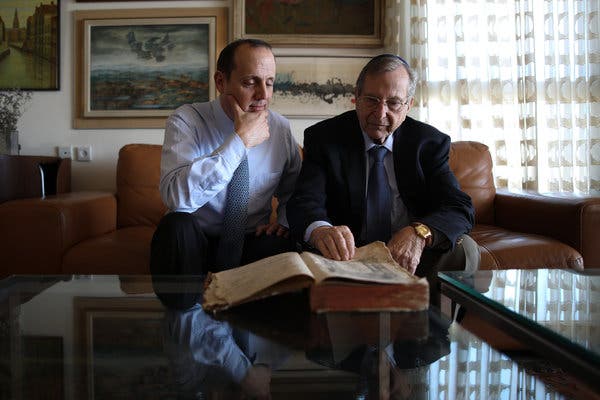 Berl Schor, 91, and his son, David, 52, reviewing a 16th-century book once owned by Berl’s father, who died in a concentration camp. It was returned by a German university after David Schor spotted it online.
The distinctive stamps on the 16th century book, written by a rabbi about the Torah, helped David Schor identify it online and reclaim it. 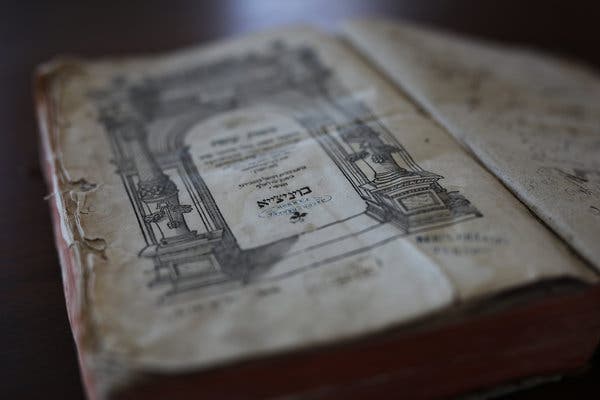 The distinctive stamps on the 16th century book, written by a rabbi about the Torah, helped David Schor identify it online and reclaim it.

Ms. Grimsted’s work in tracking the lost volumes has advanced considerably since 1990, when she discovered 10 lists of items looted from libraries in France by the Einsatzstab Reichsleiter Rosenberg, a task force headed by the Nazi ideologue Alfred Rosenberg. The task force plundered more than 6,000 libraries and archives all over Europe but left behind the sort of detailed records that have proved invaluable in tracing what was stolen.

Hundreds of thousands of records from the task force and other sources have been posted online in recent years, part of an effort by the Conference on Jewish Material Claims Against Germany, the World Jewish Restitution Organization and others to ease the path for researchers, libraries, museums, historians and families tracing the works. Ms. Grimsted’s work has been central to the task, and her publication, “Reconstructing the Record of Nazi Cultural Plunder: A Guide to the Dispersed Archives of the Einsatzstab Reichsleiter Rosenberg (ERR) and the Postwar Retrieval of ERR Loot” is, among other things, an inventory of where the many documents can be found.

The National Library of Israel has also stepped forward to help catalog and identify stolen books from Croatia and make the lists accessible to people who speak Hebrew, Ladino, Yiddish and other languages.

Though Rosenberg, who was hanged as a war criminal in 1946, was the major force behind the seizure of books, he had something of a competitor in Heinrich Himmler, the head of the SS, whose agents also collected books, particularly those associated with Freemasonry.

The Nazi targets were mainly the families, libraries and institutions of Jews but also included the Masons, Catholics, Communists, Socialists, Slavs and critics of the Nazi regime. Though libraries were destroyed and some books were burned by the Nazis early on, they later came to transfer many of the works to libraries and to the Institute for Study of the Jewish Question, which was established by the task force in Frankfurt in 1941.

“They hoped to utilize the books after the war was won to study their enemies and their culture so as to protect future Nazis from the Jews who were their enemies,” Ms. Grimsted said.

Many of the looted books recovered after the war ended up at a depot outside Frankfurt where the United States Army unit popularly known as the Monuments Men attempted to process them for return. 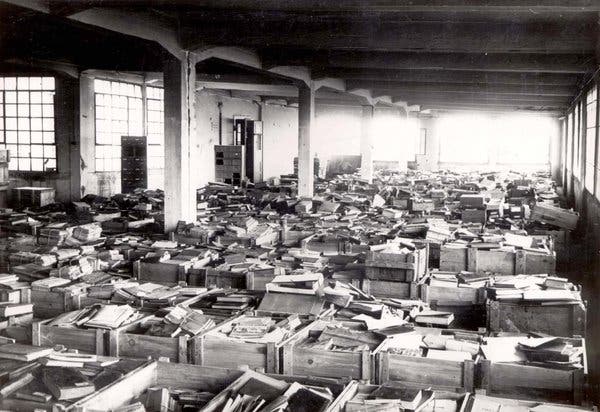 Many of the looted books recovered after the war ended up at a depot outside Frankfurt where the United States Army unit popularly known as the Monuments Men attempted to process them for return. CreditYad Vashem Photo Archives

After the war, the Monuments, Fine Arts and Archives unit of the United States Army, better known as the “Monuments Men” and famed for the return of looted art, also saved millions of books. Its main book collection point, the Offenbach Archival Depot outside Frankfurt, was the former headquarters of IG Farben, a chemical company whose subsidiary had produced a poison gas used in the death camps. The Army unit processed nearly three million books and manuscripts, which were returned, mainly to their countries of origin.

The first director of the depot, Col. Seymour J. Pomrenze, arranged for archives that the Nazis had stolen from a prominent European Yiddish organization in Vilna, then part of Poland, to be shipped to Manhattan, where the group had moved. The organization, now known as the YIVO Institute for Jewish Research, houses what is considered one of the world’s foremost collections of Yiddish books and artifacts.

Books and papers at the Yiddish Scientific Institute in 1943 in what was then Vilna, Poland (now the YIVO Institute for Jewish Research in New York City).CreditYad Vashem Photo Archives 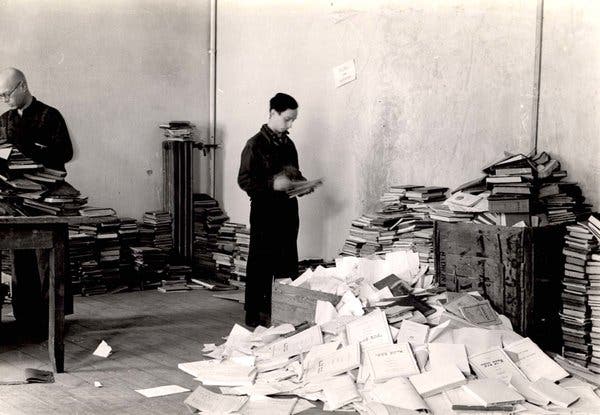 Books and papers at the Yiddish Scientific Institute in 1943 in what was then Vilna, Poland (now the YIVO Institute for Jewish Research in New York City).CreditYad Vashem Photo Archives

Many of the stolen books now reside in Russia where, still bitter about their own losses from the war, the Russians have resisted efforts to return items they took from the Nazis, researchers said.

“They stole millions of books looted by the Nazis that are now in libraries from Moscow to Vladivostok,” said Ms. Grimsted. “Many are now in Minsk — but the Russians refuse to do anything. In Belarus, they talk about possible book exchanges with Germany but nothing is happening.”

In Germany, Berlin’s Central Library created a database to help with the restitution effort in 2012. The researchers there studied 100,000 books and found that 29,000 of them had been stolen and still had some mark that identified an earlier owner. But locating those owners is a second, labor-intensive task.

“We have a small team of researchers and, since we started 10 years ago, we have returned 900 books to 20 countries,” Mr. Finsterwalder, the researcher, said.

“Thousands of books were marked by the Nazis with the letter J, an abbreviation for Judenbücher — Jewish books,” he said. “These were erased after the war and replaced with the letter G, as in Geschenk — gifts.”

Overall, libraries in Germany have returned about 15,000 books since 2005, Maria Kesting, a provenance researcher at the Hamburg State and University Library, said. “I have returned books to about 360 heirs, owners and institutions in the United States, Britain, Germany, Israel, South Africa, France and other countries,” she said.

Researchers say the process can be complicated because libraries across a country like Germany will often lack a central database of their holdings or the money to do more than minimal provenance research. Since 2008, the German Lost Art Foundation, which is funded by the federal government there, has provided $5.6 million for provenance research on books “and related items” in German libraries. The foundation publishes descriptions of books with photos in its database when owners or their heirs cannot be located.

Wesley Fisher, research director of the Claims Conference, said that it and the World Jewish Restitution Organization have helped train 180 provenance researchers in Germany, Lithuania, Greece, Italy and Croatia.

In the absence of a coordinated government effort, researchers from libraries in nine German cities have organized to trade notes, according to Ms. Kesting, who said they meet twice a year. Among the problems they have found is that the Gestapo often distributed looted works to multiple libraries.

“The books from the library of one collector were found in seven different cities,” she said.

Markus Stumpf, a provenance researcher at the University of Vienna Library, said that about 15 Austrian libraries have returned at least 15,000 books since 2009.

Books owned by Leopold Singer, an Austrian engineer whose library was looted by the Nazis, were returned to his family, who donated them to the Vienna Technical Museum.CreditTechnisches Museum Wien 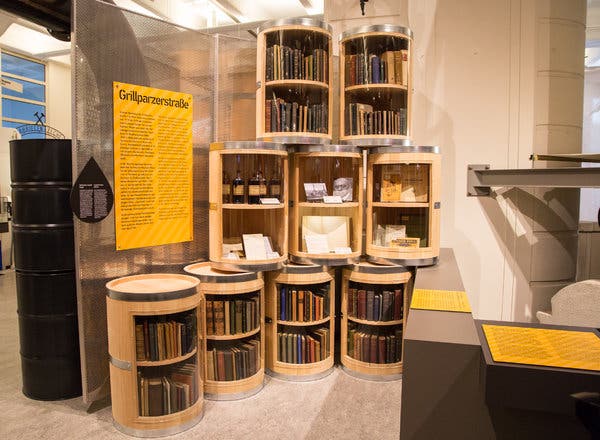 Books owned by Leopold Singer, an Austrian engineer whose library was looted by the Nazis, were returned to his family, who donated them to the Vienna Technical Museum.CreditTechnisches Museum Wien

“The most difficult part of the work is tracking down owners or descendants,” he said. “Some come easy. Some take years if there are no heirs. With many books, the nameplates, stamps or signatures have been torn out. Names are sometimes unreadable.

Ms. Kesting said: “Reaching out to the heirs is always a sensitive issue. For the heirs, it very often is painful to be confronted with their family history, a history of persecution and death and loss. For us as provenance researchers, restitutions are always very special and moving moments.”

Mr. Finsterwalder recalled an experience from 2009 when he returned a book to a man who had survived the Bergen-Belsen concentration camp as a teenager and emigrated to California. His teacher had given him the child’s activity book as a Hanukkah gift.

The concentration camp survivor, who had been reluctant to recount his wartime experience, began giving talks to students in high schools.

“When he got the book back, Mr. Finsterwalder said, “it completely changed him.”