Max Beckmann Bequest is a Bonus and Burden for Berlin Museums

The gift from the widow of Erhard Göpel, a dealer who worked for Hitler and engaged in the plunder of Jewish collections during World War II, raises ethical questions.

When Berlin’s state museums inherited an important collection of works by Max Beckmann last year, they were delighted at this unforeseen stroke of good fortune. At the same time, museum officials were aware that the bequest carried what they termed a “moral and ethical responsibility.”

The unexpected windfall, comprising 46 drawings, 52 prints and two paintings by Beckmann, came from Barbara Göpel, who died last year at the age of 95. Like her husband, she was an art historian specializing in Beckmann. Erhard Göpel, however, also served as a key member of the Linz Special Commission, the team of dealers who purchased–and looted–art across Europe for the “Führermuseum” that Adolf Hitler planned for his hometown of Linz but never built.

Göpel played an important role in looting Jewish art collections in Nazi-occupied France. As the art historians Christian Fuhrmeister and Susanne Kienlechner wrote in a 2012 portrait, “he was neither a cold ideologist, nor a soulless businessman, but he was ambitious, adaptable and opportunistic enough to put his skills at the service of a criminal system.”

The Berlin museums say initial research suggests none of the artworks in his widow’s bequest are looted, though provenance investigations continue. The new acquisitions help to fill painful gaps in the Berlin collections caused by the Nazis’ vicious 1937 campaign against what they condemned as “degenerate” art. About 20,000 works were confiscated from museums across the country; among them were 59 paintings, four sculptures and 52 drawings by Beckmann seized from Berlin. 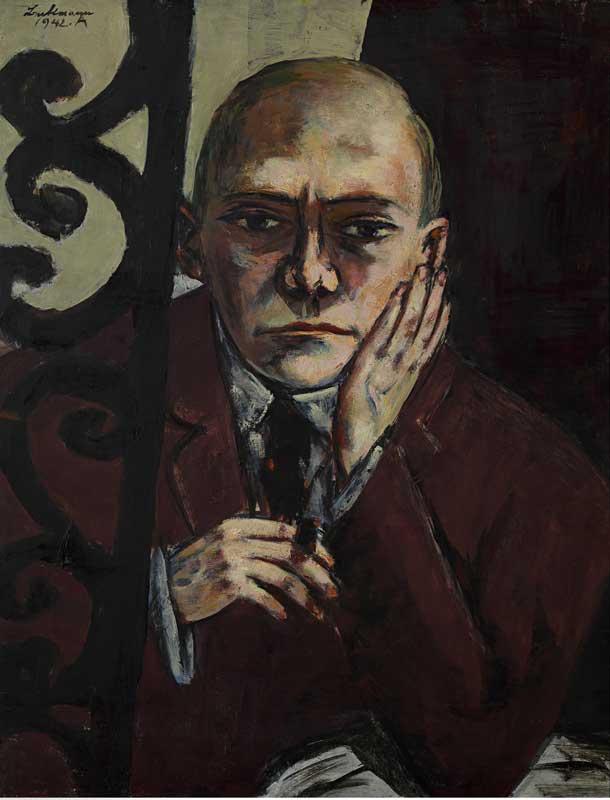 Self-Portrait in the Bar, 1942 by Max Beckmann.

The two Beckmann paintings in the Göpel bequest are part of a small exhibition at the Kupferstichkabinett (Museum of Prints and Drawings) in Berlin that runs until January 13, 2019. One is the 1942 Self-Portrait in a Bar, showing the artist in a thoughtful pose, his cheek resting on the palm of one hand while the other holds a cigar loosely between two fingers. One side of his face is in the light, the other is in shadow. He is behind a wrought-iron railing that dominates the left foreground of the painting, as though the artist is in some way constrained, almost imprisoned and out of reach. The colors are muted; the mood is somber, even tense. It hung next to Barbara Göpel’s fireplace in her Munich apartment.

The second, painted in 1944, shows Göpel sitting in an armchair; a broad, imposing figure with his legs crossed. He is holding a magazine and wearing a smart blue suit. His eyes are shifted to the side, his full face rosy with good health.

Both portraits were produced while Beckmann was living in exile in the Netherlands with his wife, Quappi. Their provenance sheds light on the grey zones between looting and the “legitimate” art market in Europe during World War II. It also bears witness to a complicated friendship and the contradictions of Göpel’s conduct in the Third Reich. On the one hand, he engaged in Hitler’s mass plunder of European Jews; on the other, he was secretly passionate about the art the Nazis hated, and was willing to take personal risks to protect artists condemned as “degenerate.”

Beckmann was one of these condemned artists. He had been dismissed from his teaching post at the Städel in Frankfurt in 1933. His work was shown at the infamous “Degenerate Art” exhibition in Munich in 1937, alongside masterpieces by such artists as Paul Klee, Wassily Kandinsky, Otto Dix and Ernst Ludwig Kirchner. They were presented chaotically, some without frames; the walls were daubed with slogans like “crazy at any price” or “how sick minds see nature.” At the opening, Adolf Ziegler, the president of the Reich Chamber of Fine Arts, described the works in the show as “the spawn of madness, irreverence, incompetence and degeneracy.”

Beckmann fled Germany on the very day that the “Degenerate Art” exhibition opened. Unfortunately, Amsterdam would not provide a refuge from the Nazis for long after war broke out in 1939. His attempts to get a visa for the U.S. failed. At the age of 60, he faced the threat of army conscription. The market for his art had crumpled and his living conditions had declined. Yet despite the difficulties, his life in exile was one of the most productive periods of his career.

“It seems incredible how I can work intensively and well despite the terror and insanity of our age, and that I still find people who take an interest in my work and who give me aid,” Beckmann wrote in a letter in October 1939.

One of his unlikely helpers was to be Erhard Göpel. After the German invasion, the Netherlands became an important hunting-ground for art for the Sonderauftrag Linz (Linz Special Commission), the organization entrusted with finding treasures for Hitler’s Führermuseum. Göpel, a fluent Dutch speaker, was recruited in 1942.

During his shopping trips to Amsterdam, he secretly visited the exiled Beckmann. He twice pulled strings to help the artist escape the draft. He also helped him find buyers for his art, smuggled his pictures and letters into Germany, and undertook money transactions on his behalf.

“For Beckmann, Göpel meant the opportunity to work freely, unmolested by the German occupying forces,” wrote Beatrice von Bormann, a curator at the Stedelijk Museum in Amsterdam, in the catalogue for an exhibition about Beckmann’s Dutch exile in Munich in 2007. “Not only that, but Göpel also emerged as one of the most important go-betweens to Beckmann’s circle of friends in Germany, who continued to support him.”

Beckmann gave Göpel artworks in gratitude–including the portrait of the dealer, and two preparatory drawings for it. In 1943, in return for his courier services, Beckmann allowed Göpel to select any work as a gift. His choice of Self-Portrait in a Bar led to a temporary falling-out with Quappi, because it was her favorite of her husband’s self-portraits. Göpel made amends with flowers.

But Beckmann’s gratitude must have been tinged with bitterness. He noted in a 1943 diary entry after a visit from Göpel that “the devil had driven by.” After a later visit from Göpel and his colleague Hildebrand Gurlitt, also a buyer for the Führermuseum, Beckmann referred to the pair as “Fatty and Dummy.”

Beckmann finally left Europe for the U.S. in 1947, where he died in 1950. Quappi stayed in touch with Göpel and gave him permission to publish her husband’s diaries. The conflicted art historian was instrumental in rebuilding Beckmann’s reputation after the war, founding the Max Beckmann Society in 1951 with Beckmann’s son, Peter. Barbara Göpel continued her husband’s work after his death in 1966, and compiled a Beckmann catalogue raisonné published in 1976. 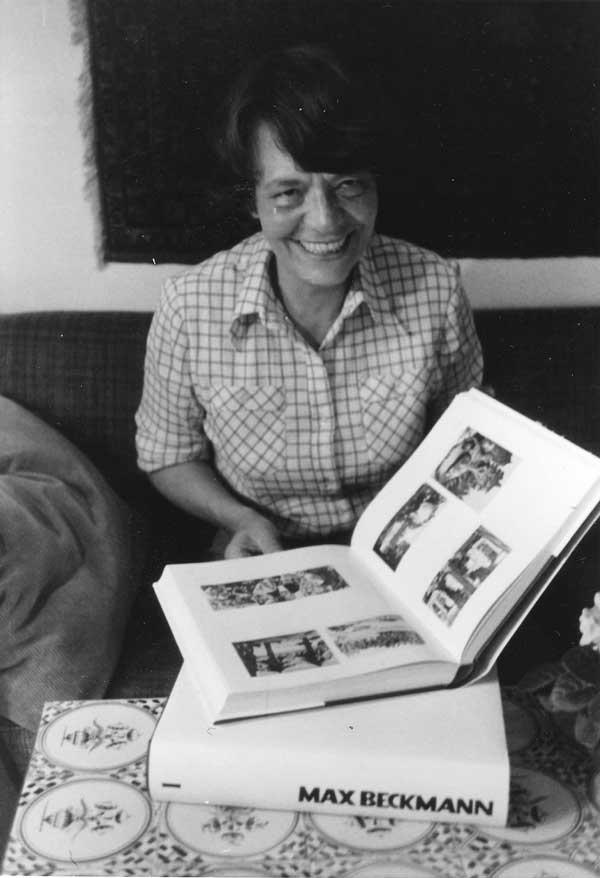 Not all the paintings in the Göpel collection were part of the bequest. A small work in blues and grays dating from 1942 called The Egyptian Woman was sold this summer at Grisebach auction house in Berlin. It fetched $5.3 million ($6.2 million with fees), a record for any artwork ever sold at auction in Germany.

Many of the drawings in the bequest, which range in date from 1900 to 1947, have never before been exhibited in public. At least 17 came directly from the artist; Göpel added to his collection with additional purchases after the war. Quappi also gave him a drawing in 1952 “as a souvenir of our friendship.” 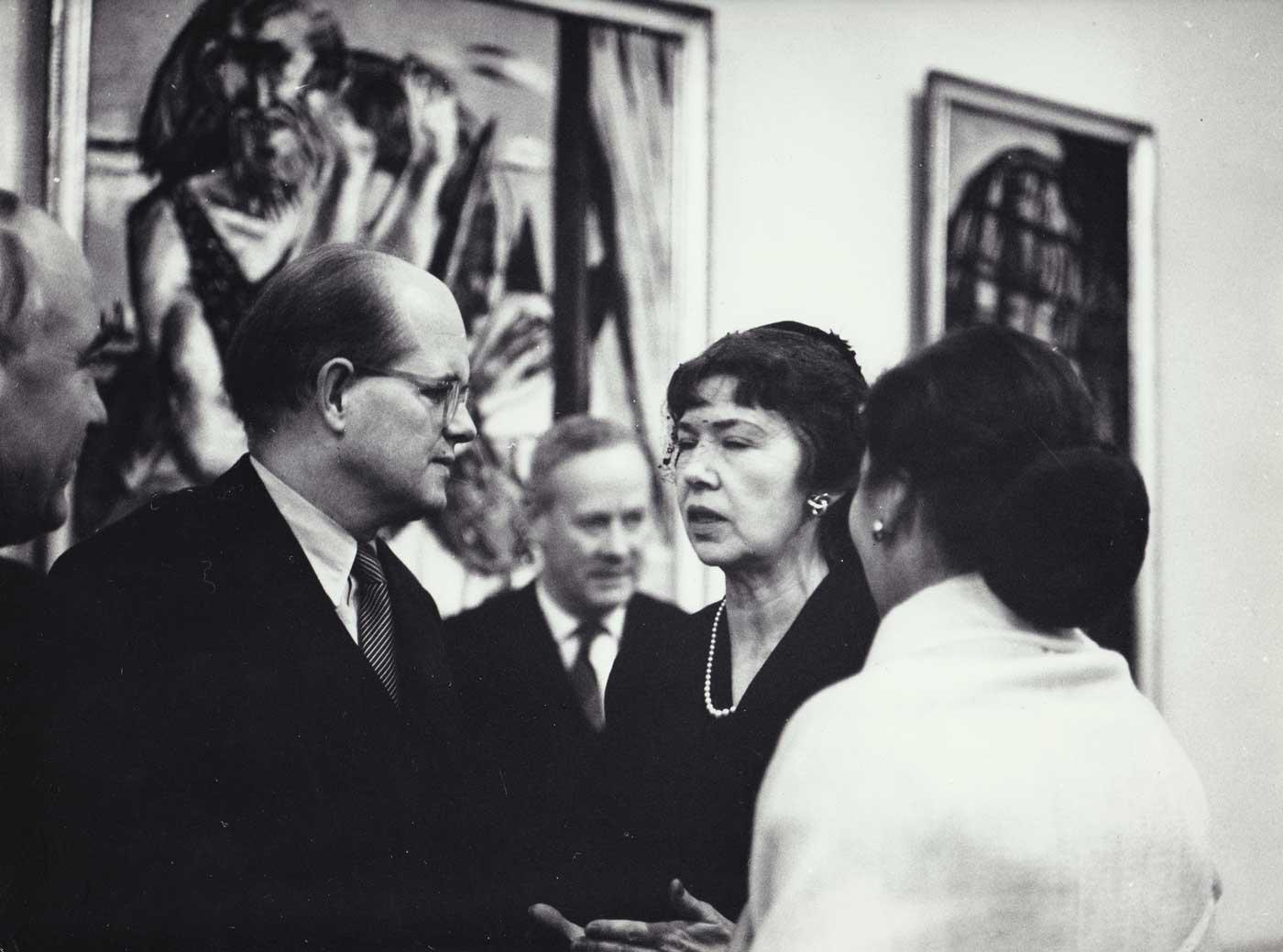 Erhard Göpel and Mathilde "Quappi" Beckmann at the Kunsthalle Basel, 1956

A strange friendship born partly out of need, but nevertheless, one that sustained the war.