Piet Mondrian, right, in the New York studio of the artist Harry Holtzman, left, in 1942

Berlin — There is no dispute that four paintings by Piet Mondrian in the Kaiser Wilhelm Museum in Krefeld are important works from his “neo-plastic” period when he used grids and primary colors to create masterpieces of geometric beauty.

Beyond that, much about the paintings seems to be in doubt.

They have been in the museum since at least 1950, but questions about when exactly they arrived there, and how, have now surfaced as matters of mystery and debate.

The heirs of Mondrian, the pioneering Dutch abstractionist, have staked a claim to the paintings, asserting that he lent them to the museum almost 90 years ago and then left them behind when he fled Europe as World War II deepened.

They have hired an art restitution lawyer, Gunnar Schnabel, and a provenance expert, Monika Tatzkow, who spent three years tracking the paintings back to the days of their creation in the 1920s.

But the city of Krefeld, which owns the museum, says it believes the paintings were gifts from Mondrian, though it has been unable to buttress that claim with evidence.

Mondrian “regularly gave away paintings for which he no longer had any use,” a spokesman for the city wrote in an email response to questions last month.

The heirs dispute that Mondrian was so fond of giving gifts, and suggest that the museum has for decades ignored indications that the paintings were not its property. The heirs have even enlisted a high-profile ally, a former German culture minister, Michael Naumann.

In a letter last fall to the mayor of Krefeld, Mr. Naumann described the history of the paintings as “an unspeakable piece of knavery by the museum’s management since the end of the war in 1945.”

In recent years, many museums have worked to trace the histories of pieces they own, particularly those that may have changed hands during the war.

“Museums should have done provenance research on all the paintings in their collection,” said Sally Yerkovich, who teaches a course on museum ethics at Columbia University in New York. “If they have items of unclear provenance, they should publish these gaps.”

The city of Krefeld said it is planning a comprehensive examination of the provenance of its collection and, in the case of the Mondrians, will be commissioning its own expert to research their history.

Mondrian created the four works during a period when abstraction had taken hold. The researchers for the heirs, who are known as the McManus Holtzman Irrevocable Trust, tracked the paintings to an exhibition in Frankfurt in 1929.

The exhibition was called “The Chair,” and 19 Mondrians, including the four now held by the museum, were offered for sale and displayed above metal tubular chairs, according to Ms. Tatzkow’s research. 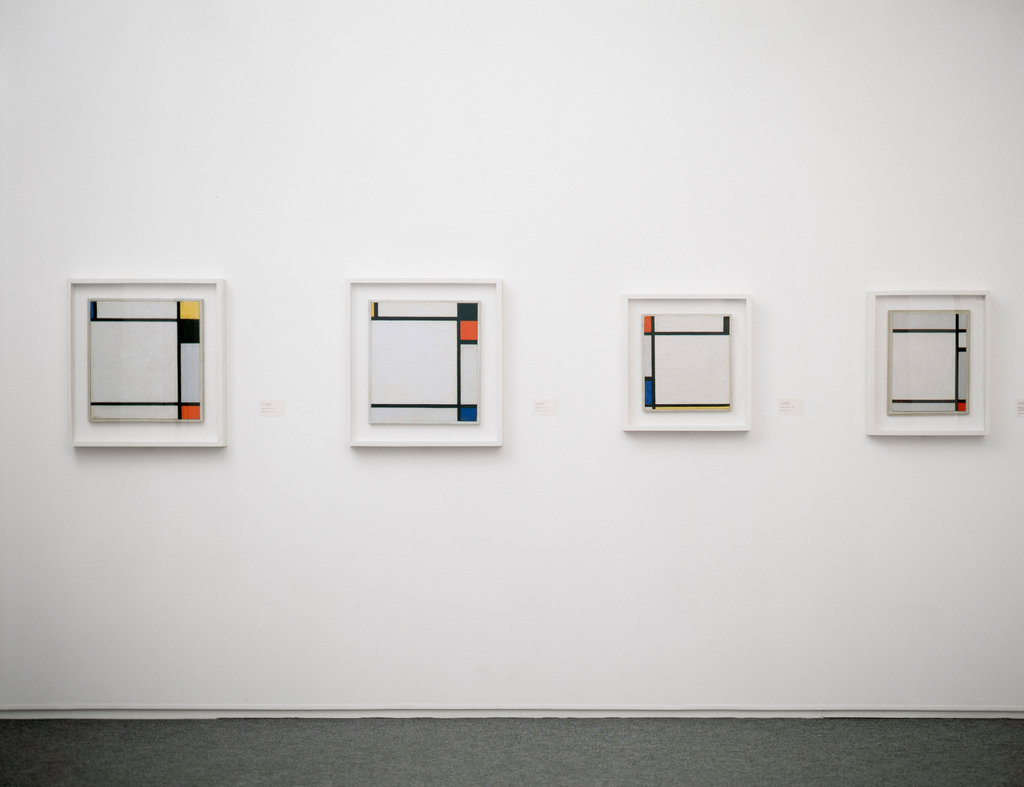 The four Mondrian works being sought by his heirs as they have been displayed at the Kaiser Wilhelm Museum in Krefeld.

“They presumably arrived at the museum in 1930,” Ms. Röder wrote, “when the director at the time, Max Creutz, was planning an exhibition of international avant-garde artists that never actually took place. Presumably they belonged to Mondrian.”

A curator planning a show at the Krefeld museum the same year then inquired as to whether some of the Mondrians could be lent to its own exhibition, according to correspondence Ms. Tatzkow found.

The heirs believe at least eight Mondrians were lent to Krefeld as a result, a view supported by a 2010 email from a Krefeld museum curator, Sabine Röder, to the art historian Walter Grasskamp.

Mr. Grasskamp quoted the email in a 2016 book, “Das Kunstmuseum” (The Art Museum). Ms. Röder, who has since retired, declined to be interviewed for this article.

No evidence has surfaced of what happened to the Mondrians over the next two decades, or whether the artist ever requested their return before he fled Paris for London in 1938. From there, he traveled to New York where he died in 1944. Ms. Tatzkow says Mondrian never found out what had become of his paintings and believed all his works in German museums had been destroyed.

Abstractions like those created by Mondrian indeed held no power for the Nazis who campaigned against modern art. Two of Mondrian’s works, seized from museums in Hanover and Essen, were shown in the infamous “Degenerate Art” exhibition that opened in Munich in 1937, the year Joseph Goebbels, the Nazi propaganda minister, orchestrated a mass seizure of modern art in all German museums.

The Kaiser Wilhelm Museum, which was founded in 1897 and now focuses on postwar art, was among those that had many pieces confiscated. But the Mondrians are not on any list of the seized works, perhaps Ms. Tatzkow and Mr. Schnabel argue, because, as loans, they were not on any official inventory.

What is clear is that the Mondrians were at the museum by 1950, when the postwar director, Paul Wember, said they had surfaced under what he described as “mysterious circumstances.” Mr. Wember described the discovery in his 1973 book “Kunst in Krefeld” (Art in Krefeld) but did not elaborate.