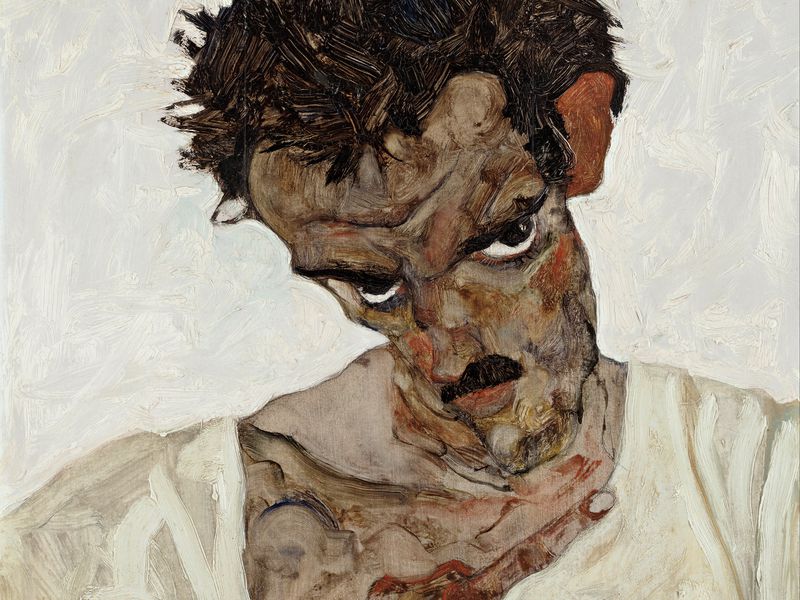 Egon Schiele, "Self-Portrait with Lowered Head," 1912
A new digital catalogue raisonné dedicated to Egon Schiele dives into the Austrian Expressionist’s extensive oeuvre, from the cluttered, crescent-shaped configurations of his 1915 “Krumau Town Crescent I (The Small City V)” to the characteristic angularism of his 1912 “Self-Portrait with Lowered Head.”

The project—spearheaded by Jane Kallir, co-director of New York’s Galerie St. Etienne and author of the artist’s most recent print catalogue raisonné—details 419 works and counting, with a particular emphasis on Schiele’s paintings. (Kallir tells the Art Newspaper’s David D’Arcy that drawings and watercolors will be added in 2019.)

Motivations for moving the catalogue online are manifold: As Caroline Elbaor of artnet News writes, Schiele’s complete oeuvre encompasses some 3,000 works, including several hundred that have only been found and authenticated in recent years. By making the catalogue digital, Kallir and her team can add these recently discovered titles to the list and update corresponding entries at will. Additionally, Kallir tells D’Arcy in a separate Art Newspaper article, the accessible nature of "Egon Schiele: The Complete Works Online" promises to aid scholars seeking to trace specific pieces’ provenance or debunk the existence of forgeries.

“It no longer makes sense to release such a publication in print form,” Kallir explains to D’Arcy. “Books are very expensive, and out of date even before they hit bookstores.”

According to the portal page, the online catalogue raisonné draws on the expanded 1998 print edition of Kallir’s Egon Schiele: The Complete Works. Works authenticated following the publication of this print volume are included in the digital database, as are revised bibliographical, exhibition and auction histories for every entry. Information will be updated on a regular basis, and additional features, including advanced search functions and links to ancillary documents and images detailing provenance, are in the works.

The project is also personal. Last year, Kallir established the Kallir Research Institute, a non-profit foundation that aims to continue the work of her grandfather, art historian and gallerist Otto Kallir. Otto published the first catalogue raisonné of Schiele’s oil paintings back in 1930. His work provided the baseline for his granddaughter’s later research, which was supplemented with assistance from Otto’s longtime associate, Hildegard Bachert.

The Kallirs' work has provided a critical pre-World War II record of the artist’s body of work—information that is particularly significant in the tangled courtroom drama surrounding the restitution of Nazi-looted art. As D’Arcy notes, many Schiele pieces owned by Vienna’s Jewish collectors ended up first in Nazi hands, then in the possession of art dealers who may or may not have known of the works’ unsavory provenance.

Earlier this year, 63 Schieles once owned by Austrian cabaret star Fritz Grünbaum, who was murdered at Dachau in 1941, became the subject of controversy after the German Lost Art Foundation pulled them from its database of illegally seized works of art. Writing for the New York Times, William D. Cohan explains that the foundation ruled the works survived the war in the safekeeping of a Grünbaum relative who later sold them legally. Grünbaum’s heirs disagree, arguing that the Swiss art dealer who brought the works back on the market in 1956 falsified documents “proving” their provenance.

The 63 Grünbaum sketches in question remain in limbo, trapped in an ongoing tug-of-war between heirs and dealers, but the groundwork laid by Otto Kallir, as well as the enhanced provenance slated for inclusion in Jane Kallir’s new portal, may make it possible for scholars and courts to better resolve similar restitution debates.

Returning to Schiele himself, D’Arcy reports that the digital catalogue features high-resolution images of the artist’s confrontational canvases. Users can sort works by year and subject, honing in on Schiele’s trademark nudes—easily distinguished by their distorted visions of the human body—or tracing his evolution from “a prodigious student in 1907 to a brazen young man out to shock his viewers in 1910 to Schiele the soldier in 1918, deployed by the Austrian Army soldier at a prison camp for Russian troops.”

According to a press release, phase one of the portal (dedicated to Schiele’s paintings, graphics, sketchbooks and sculptures) launched in conjunction with the 100th anniversary of the artist’s death from influenza in 1918. He was just 28 years old and, in the words of the non-profit Art Story Foundation, appeared to be on the “verge of the commercial success.”

Phase two of "Egon Schiele: The Complete Works Online" (cataloguing the artist’s watercolors and drawings, including more than 200 newly authenticated works on paper) will be unveiled in late 2019. Scans of early exhibition catalogues, ancillary photo documentation, dossiers on principal Schiele collectors and links to the artist’s writings will also be added in due time.