Nazi-looted art: Why are restitutions still the exception?

During World War II, some 600,000 paintings were stolen or displaced. Guidelines were established 20 years ago in order to return looted works to their rightful owners, but thousands are still missing.

Historians estimate that more than 5 million items have changed hands inappropriately during the Second World War in Europe. But despite the dimension of the crime, the question of works that were looted from Jewish owners remained the elephant in the room for much of the 20th century.

It was only in 1998 that representatives of 44 countries convened in Washington D.C. to establish a set of principles  to help descendants reclaim their family's art. The goal of the non-binding "Washington Principles on Nazi-Confiscated Art" was "to complete by the end of this century the unfinished business of the middle of the century," declared Stuart Eizenstat, the US official who hosted the conference.

The guidelines were praised as revolutionary at the time.

However, 20 years later, "The Washington Principles have been a failure," says historian Marc Masurovsky.

Masurovsky is the co-founder of the Holocaust Art Research Project (HARP), which was established in 1997. Through HARP, he aimed to focus on archival research, and he unwillingly became a restitution activist through his work. He says he can name a dozen cases off the top of his head of claimants who are still seeking justice.

Eizenstat's vision proved overoptimistic. More than 100,000 paintings remain lost to this day. Some of the cases brought by heirs seeking the return of works by artists like Picasso and El Greco from museums have been going on in court for decades. 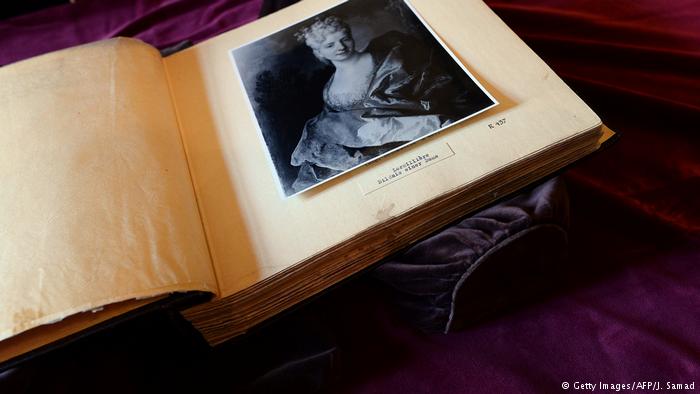 The dream of every provenance researcher: an inventory of looted art. Hitler's last known personal art album lists works stolen by the Nazis during the war

"The glass is maybe slightly more than half full," Eizenstat admitted in a recent interview, however adding, "Just think of where we were before 1998. We would not be anywhere without the Washington Conference."

For most of the second half of the 20th century, the trajectory of works between 1933 and 1945, or their so-called provenance, was a topic that curators all over Europe aptly side-stepped.

"When I started working for the auction house in the mid-90s, the motto was 'Don't mention the war,'" Lucian Simmons, the head of provenance research at Sotheby's, said at a recent conference in Berlin, "and if one object had once belonged to Goering, you'd be encouraged to leave that out and write 'formerly owned by senior Nazi official.'"

The legal context was also adverse to restitutions. In Europe, private claims were almost universally time-barred under national property laws, which meant that a rightful owner's claim to looted items simply elapsed after a given period of time, 30 years in Germany, after the theft. In the pre-internet era, that period was far too short to trace an object that could have been anywhere in the world. In some countries like in France, cultural property laws forbade the removal of any art from the state's collection.

The most important contribution of the Washington Principles was that it stated a moral principle. It said: "Of course property law should be applied, but the issue of looting of art that happened during the Holocaust was out of the ordinary." In the declaration, the signatories also formulated the goal of total transparency of museums' collections and unrestricted access to archives. The declaration encouraged governments to create structures to allow pre-war owners to find their art and achieve what they called a "just and fair solution."

Every time the phrase "just and fair solution" is mentioned, Masurovsky gets agitated. There is nothing just and fair, he claims, about the Washington Principles. For him, the declaration disregards the claimants' perspective. "Stuart Eizenstat admitted that he used the guidelines published by American museums for his draft. Just imagine! It is precisely American museums who have historically fought against restitution the most relentlessly!"

But the crux of the issue for Masurovsky is that the principles were non-binding. "Everyone went home satisfied — they hadn't committed to anything but the smallest common denominator."

As detailed in a report by the Claims Conference in 2014, the majority of nations who signed the Washington Principles have since done next to nothing. Only five countries out of 44 — Germany, France, the Netherlands, Austria and the UK — have fulfilled the request to provide "alternative dispute resolution mechanisms for resolving ownership issues." Because statutes of limitation mean that claimants have very little chance of recovering family property in court, such bodies are absolutely vital.

Where do Germany and the US stand?

In the US, attempts to create such a panel failed, leaving heirs at the mercy of an expensive court system when making a claim. And yet, the US remains one of the most favorable jurisdictions for claimants, in part because of the Holocaust Expropriated Art Recovery Act (HEAR Act) signed in 2016. Since then, judges have recognized the principles as part of US policy and turned down foreign governments seeking to dismiss cases against them.

In Germany, it was more the discovery of thousands of artworks in Cornelius Gurlitt's apartment than the Washington Principles that prompted a nationwide debate about looted art.

Provenance research has massively increased ever since. The Lost Art Internet Database currently lists more than 34,524 items from public museums with a suspicious provenance. Fifteen years ago, it listed only a few hundreds.

Yet Germany's litigation system has been regularly castigated.

For one thing, the country does not have a restitution law like Austria, which some say would significantly accelerate restitution claims.

Secondly, the so-called Limbach Commission, a panel convened by the German government to give recommendations on restitution claims, can only intervene if both sides agree to sit at the table. Several museums have unsurprisingly refused to do so in the past.

Lastly, no nation in the world was able to coerce private collectors or auction houses into divulging the provenance of their artworks. While some big auction houses like Sotheby's and Christie's now have sizeable provenance departments and probe every object before they sell it, many art dealers still shield behind business confidentiality. As long as this is the case, much of the looted art will remain unavailable to potential claimants, says Marc Masurovsky.

For all the declaration's shortcomings, it is still a fact that the issue of looted Jewish property has become an integral part of the public discourse related to the Holocaust. But as the last historical witnesses are dying out, experts in the field are growing restless. They know progress takes time, but it's getting late.