Suit Accuses Dutch Museums of Holding On to Nazi-Tainted Art 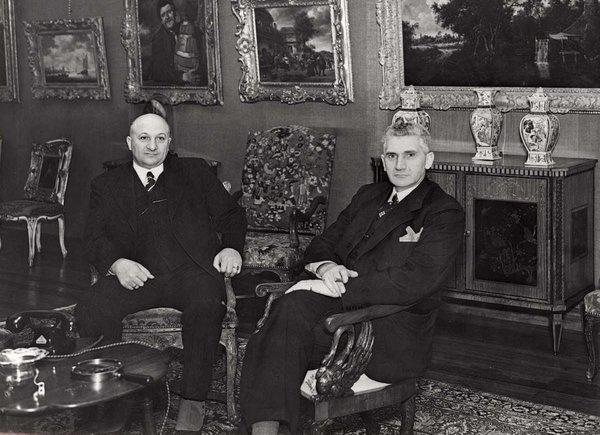 Nathan Katz, left, and his brother, Benjamin, were prominent art dealers in the Netherlands prior to World War II.

Amsterdam — Throughout World War II, the Dutch art dealers Benjamin and Nathan Katz sold art they owned, including works by Rembrandt and Jan Steen, to Nazi officials, in one case in exchange for exit visas that enabled 25 Jewish relatives to escape the German-occupied Netherlands.

Some critics have called the Katzes collaborators because they also helped top Nazi officials buy art from other collections they did not control.

But three generations of the Katz family have argued that their actions were made under duress and have fought for decades to regain possession of scores of works transferred during the war. They say more than 140 of the works are held by the Dutch government to whom the Allies returned them after seizing them back from the Nazis.

A Dutch government-appointed panel that decides restitution requests has denied the Katz claim, arguing that the works, now in the hands of private and public museums there, were sold fair and square under circumstances that “could not be considered involuntary.”

But on Monday, an American heir of Benjamin Katz brought the dispute to the U.S. court system with a lawsuit that demands the Dutch government and the museums return 143 works. 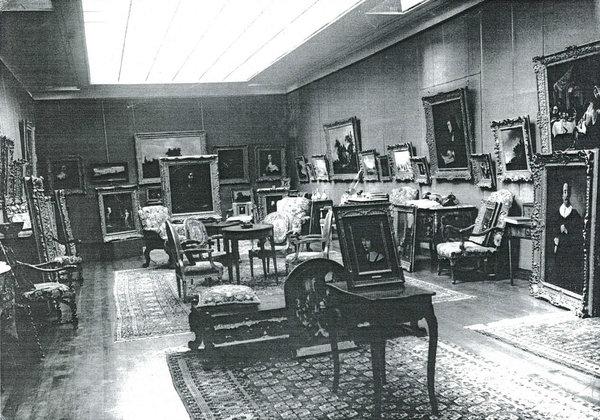 The Katz brothers specialized in art from the Dutch Golden Age, as evident in this photograph of paintings lining one of their galleries in the Netherlands before the war.

The Dutch Culture Ministry said it could not respond to the lawsuit because it had yet to receive notice of it.

The Katz case, one of the more sprawling art restitution cases in Dutch history, illustrates how such claims can be held to a higher standard when they involve Jewish art dealers, rather than private Jewish art owners.

The government-appointed panel in the Netherlands, the Dutch Restitutions Committee, acknowledges that its guidelines for returns are more stringent for art dealers “based on the principle that an art dealership’s objective is to sell, even during the war and even if the dealers were Jewish.”

Since 2002 when it was created, the restitutions panel has decided 42 cases filed by the heirs of art dealers. Nine of the claims were granted in full, 21 claims were rejected and in the case of 12 claims, the panel returned some, but not all, of the works.

In their findings, the Dutch panel held that many of the Katz works were sold at prices roughly in line with the market, a position that the heir rejects. “Although the Katz brothers usually received some payment for the artworks sold under duress, it was generally below market value,” reads the suit, filed in U.S. District Court in Charleston, S.C. 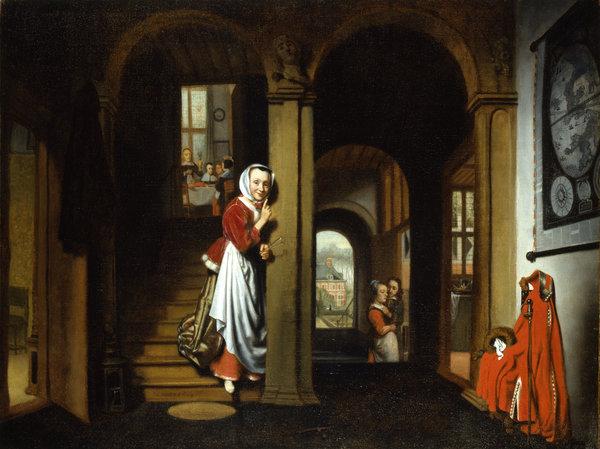 The Katz family is seeking the return of this painting by Nicolaes Maes, “The Eavesdropper,” painted in 1657 and now held at the Dordrechts Museum in the Netherlands.

The suit was filed there because Mr. Berg lives nearby. Although U.S. courts have sometimes held that they have limited jurisdiction in the actions taken by foreign governments, the heir’s lawyers argue that the federal court can enter the dispute under the Foreign Sovereign Immunities Act, because it “concerns rights in property taken in violation of international law.”

Rebecca Gibson, another lawyer who represents Mr. Berg, said: “Arm’s length transactions between a Jewish business and Nazi agents in a Nazi-occupied country were virtually impossible.”

In 1940, the Nazis required all Jewish businesses, including art galleries, to register with the state. The following year, they were forced to relinquish control to non-Jewish administrators, a process known as Aryanization. In April 1942, all Dutch Jews were required to wear the yellow star and deliver their valuables to the Liro Bank, which was set up to loot Jewish property. Transports to concentration and death camps began in July of that year.

The Katz brothers were given exemptions from some anti-Jewish laws: They were not required to wear the star and were allowed to drive for business purposes, even to travel out of the country. In 1941, for example, the Nazis sent Nathan Katz to Switzerland to close the deal on an important art collection there, according to the World War II art historian Lynn H. Nicholas, who has been a consultant for the Katz heirs.

In part, these exceptions were a recognition of their standing in the art world where their galleries often handled the sale of Dutch Golden Age old masters for whom the Nazis had a special attraction. Nazi representatives, such as Hitler’s art buyer, Hans Posse, showed up at the brothers’ galleries within months of the invasion.

“Sometimes they would give people a special dispensation,” said Floris Kunert, coordinator of the Expert Center on Restitution at the Netherlands Institute for War Documentation, an independent research institution. “But it is important to note that these exceptions and exemptions were always temporary and they were always connected to something that the Nazis wanted.” 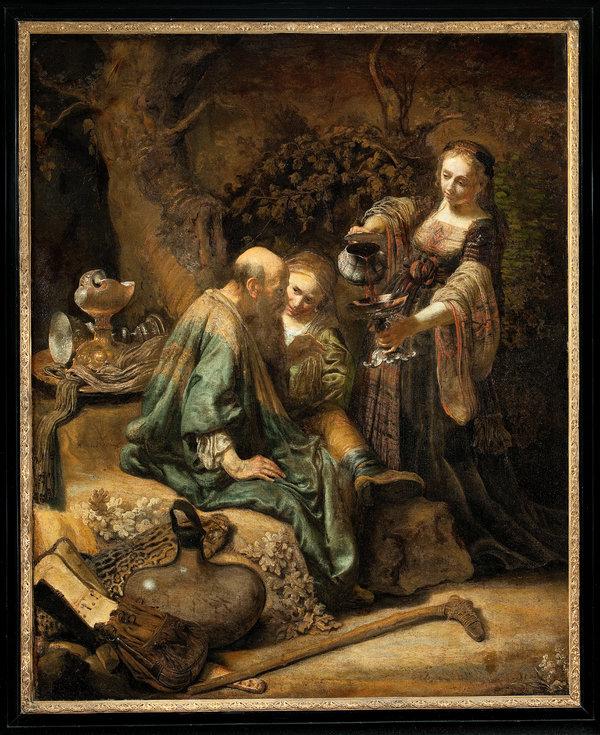 This painting of Lot and his daughters, attributed to the circle of Rembrandt and painted in 1640, is another of the 143 works that an heir to Dutch Jewish art dealers is asking the Dutch government to return.

He added, “Certain dealers were asked to go out and look for valuable artworks from certain collections and to negotiate favorable prices for sale to the Nazi regime. It’s difficult to speak about choice when these circumstances are in effect.”

Ms. Nicholas noted that in a letter surrounding Nathan Katz’s trip to Switzerland, the Nazis revealed that they thought it was an acceptable risk to allow his travel because “Katz’s capital and his wife and children stay behind and are under German control.”

The following year, Nathan Katz won German permission to move his family to Switzerland, though they had to leave behind much of their property, including their home.

In one particularly compelling Katz family account, the art dealing brothers were able to leverage their ownership of a single painting, Rembrandt’s “Portrait of a Man,” to save 25 of their relatives. They traded another to free their mother from a deportation camp. After the war, the Katz brothers were able to buy back the Rembrandt as part of a deal in which the Dutch government released 28 artworks to them. The brothers had to pay 289,000 guilders to the Dutch state (about $1.5 million in today’s dollars) for these works, according to the complaint.

(The Rembrandt, later resold, is now in the collection of the Los Angeles County Museum of Art.)

The Katz family has gotten back one additional work, Ferdinand Bol’s “Man With a High Cap,” which the Dutch government returned to the heirs in 2013.

The Dutch restitutions panel acknowledged the tense situation the Katz brothers faced, but said in its report that there was little evidence that the Nazis’ art agents had threatened them. But the Katz family says the dangers the brothers and their family faced were implicit, and were contained in the very fabric of being a Dutch Jew at that time.

And at times they were explicit, said Mr. Berg, who provided his family’s account of what happened when Reichsmarschall Hermann Goering showed up at the gallery, interested in buying a few things and armed with a handgun.

“He simply pointed at the artwork he desired,” Mr. Berg said.