By Herbert I. Lazerow

A Tragic Fate: Law and Ethics in the Battle Over Nazi-Looted Art (2017) by Nicholas M. O’Donnell 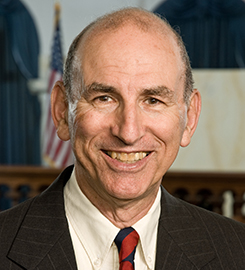 SAN DIEGO — This is a terrific book that everyone should read.

Nicholas O’Donnell’s book begins by describing as the paradigm case Camille Pissarro’s Rue St. Honore, apres-midi, effet de pluie, sold by the German Jewish art dealers Paul and Lilly Cassirer for a pittance, now resting in a Madrid museum, and asks the two questions that will occupy the book: “One wonders why the painting is in Madrid and not with the Cassirer heirs.  One also wonders why the question of who ought to have the artwork only came to a head in the 1990s.” It then comments, “It is a painting that no one disputes was stolen by the Nazis, yet it has not been, and may never be, returned to the family who owned it.” He then ends his preface by pointing out that these disputes are much more complicated than they first appear, usually involving more than one legal system with different legal provisions and substantial factual disputes, complicated by the fact that there are usually no living witnesses who can answer puzzling questions. This four-page introduction nicely prefaces the argument of the book, that justice has not been served by the legal system. It also hints at the impatience felt by Mr. O’Donnell, a litigator with Boston’s Sullivan & Worcester, who has participated in restitution cases on the side of the claimants, at the uneven pace at which justice has proceeded in these cases.

It is unfortunate, but the Pissarro is not the paradigm case of art restoration. The status of the defendant as a foreign government, the location of the artwork, and the complicated dealings leading up to the acquisition of the work by the Spanish government differentiate it from many art restoration cases. Nonetheless, the introduction is an excellent springboard to the book.

The first two chapters set the scene. The first is a brief summary of the depredations the Nazis visited upon Europe’s Jews, gypsies, homosexuals and other despised groups. It rightly concentrates on the Jews because they were the most numerous of the victims and the ones most likely to have significant amounts of art. The Nazi action was not isolated to art. The Nazis planned to change the culture of their German empire as much as Stalin and Mao wanted to revolutionize their cultures. Elimination of the wrong art and the wrong people was part of that cultural change.

There then follow descriptions of 16 cases (and a few additional mini-descriptions) in which Jews who lost art during the Nazi period tried to reclaim that art. O’Donnell takes us step by step through the underlying facts, the arguments of both parties, the court decisions, and the occasional settlement negotiations of the parties.

Some won; some lost; some settled; some cases are still pending.

The book concludes with a chapter outlining the efforts of European countries to restore (or to impede the restoration) of art to the people from whom it was taken, and a hopeful chapter on the likely consequences of the Holocaust Expropriated Art Recovery Act of 2016 which unfortunately was written before the committee report on the bill was available.

The general reader who is not a lawyer may need to work a bit to understand many aspects of the book. That work is worthwhile. O’Donnell is a realist.  He does not simplify what is a complex series of issues with which the courts and the parties must deal.

Some aspects of these cases stand out.

One is the fact that most of these cases do not involve the casual purchaser of a painting or two.  These are art dealers and major collectors whose heirs are claiming the work.  That is logical.  In order to have a serious claim, one must have records.  Ordinary Jews were lucky to escape with their lives. (Indeed, many of the owners whose fates are detailed in this book did not.) Taking records that would prove your ownership was a luxury not accorded to many people, but major collectors and dealers would have business records that might have been preserved by the Nazis to whom the galleries were Aryanized, or in the voluminous paper records of their misdeeds kept by German and Austrian authorities.

Only half the claimants had children. That is a remarkably small percentage of any population. That means that the heirs claiming the works in half the cases are not direct descendants of the original owners. From a legal point of view that should make no difference, as a great-niece or even a perfect stranger designated in a will is as much an heir as a grandchild. Nonetheless, the more distant claimants are from the owners from whom the work was taken, the less sympathetic they appear.

It is also worth noting that the Nazi experience substantially diminished the finances of the art owners. They were for the most part major industrialists or bankers, which is what drew the attention of the Nazis. Their heirs claiming the art range from comfortable to not-so-comfortable, but none has appeared to regain the pre-war wealth positions of their families. That is significant.  It is financially prohibitive for any but the wealthy to own high-value art.  The cost of security, insurance and upkeep is far beyond the financial ability of the middle-class family. That means that any art recovered by the heirs of the original owner will be sold.  Since few museums have significant acquisition budgets, the most likely purchasers are wealthy individuals. Their purchase usually means that the artwork is withdrawn from public view.

Despite a great deal of name-calling in litigation, it would have been very difficult for purchasers of the art to have discovered that it had been stolen. It would also have been difficult for the claimants to both know that they were the heirs to the work and to discover where the work was located. Indeed, the almost universal pattern of claimant discovery is either that the work is sent to a major auction house to be sold, or is displayed at a major museum,

O’Donnell repeatedly demonstrates how complicated these cases are and how many of the issues have nothing to do with the substantive question of whether the art should be returned. One need not add that the more complicated the case, the higher the legal fees required to defend it.

My major criticism of the book is actually criticism of the subtitle, which is “law and ethics in the battle over nazi-looted art”. There is much law discussed; there is no systematic treatment of the ethics. It is entirely possible that word “ethics” was added by the publisher in an attempt to market the book. This review is too short for a comprehensive treatment of the ethics of the recovery of stolen art, but it may be instructive to ask how the cases that have been decided have come out.

I hope that everyone will agree with one proposition.  When a thief steals property and that property is later found in the possession of the thief or someone with whom the thief was in cahoots, the property should be returned or paid for. That was in fact the result in the two cases fitting that description, Portrait of Wally and Altmann, the latter being the basis of the movie Woman in Gold (2015). It is striking (and made for increased legal difficulties) that the party on the losing side of each decision was the government of Austria.

The proposition on the other side is that the original owner should not recover the work when it was not stolen, but sold.  The problem with this proposition is the difficulty of determining the difference between a sale and a theft in some situations. There is general agreement that where a dealer is informed by the government or by the Nazi party that his gallery is being Aryanized and that he will sell his inventory at a ridiculously low price to a designated member of the Nazi party (which price is paid into a blocked account that the seller cannot reach), that is a theft. When the art is confiscated by the government for the payment of discriminatory taxes, that is also a theft.

Opinions differ on the situation where the owner sells his art because he has been impoverished by Nazi rules depriving him of the ability to earn a living. Some people, and I believe O’Donnell is among them, believe that this is a theft. Others believe that this is a sale that passes good title to the artwork, and whether the impoverishment is caused by economic reverses, Nazi laws, or improvidence is irrelevant. Several of the cases where the claimant has not been able to recover the art were decided because the fact-finder did not believe that the art had been stolen.

That leaves cases where the art has certainly been stolen under anyone’s definition, but it has been sold to someone who bought the art without knowing that it had been stolen. Reasonable people can differ as to whether the art should be returned to its original owner.  Reasonable legal systems do in fact differ. In common law countries such as England, Canada and the United States, the art must be returned. In civil law countries whose systems are based on Roman law, the good faith purchaser is usually protected.

Then there are the cases where Mr. O’Donnell points out that questionable decisions by the lawyers doomed any possible recovery.

In the cases that have been litigated, the value of the art has increased so steeply that it is worth far more than either the original owner or the good faith purchaser paid for it. A list of the litigated artists includes Cranach, Degas, Klimt, Kokoschka, Picasso, Pissarro, Renoir, Schiele and Van Gogh. Sale of the work would provide sufficient compensation for both the claimant and the good faith purchaser.

Several cases have resulted in creative, negotiated settlements (though not before substantial sums were spent on litigation).

In a case known as the Searle Degas, the parties agreed that each owned half the work.  Searle donated his half to the Art Institute of Chicago.  The claimant sold his half to the same institution. The claimant received a substantial payment (which other museums simply could never have afforded).  Searle received a substantial income tax deduction the amount of which was fixed by the arm’s length sale of the claimant’s half of the painting to the museum.

In another case, a French resident claimed a Pissarro that had been purchased by a private party with no knowledge that it had been stolen.  That individual donated the painting to the University of Oklahoma.  The settlement acknowledged the ownership of the French claimant, and provided that the painting would rotate every several years between Oklahoma and a French museum, and would be left to a French museum on the death of the claimant. One wonders whether the Oklahoma lawyers were aware of the French law protecting France’s cultural patrimony that allows France to forbid the export of national treasures.  Designation of the Pissarro as a national treasure would frustrate the University’s benefit of the settlement.

In short, the stories are riveting (and sometimes heart-breaking), and very well told by Mr. O’Donnell. I recommend this book to anyone interested in the fate of art stolen during the Holocaust, or who wants to discover the complexities of litigation.

*
Lazerow is a professor of law at the University of San Diego and author of Mastering Art Law.