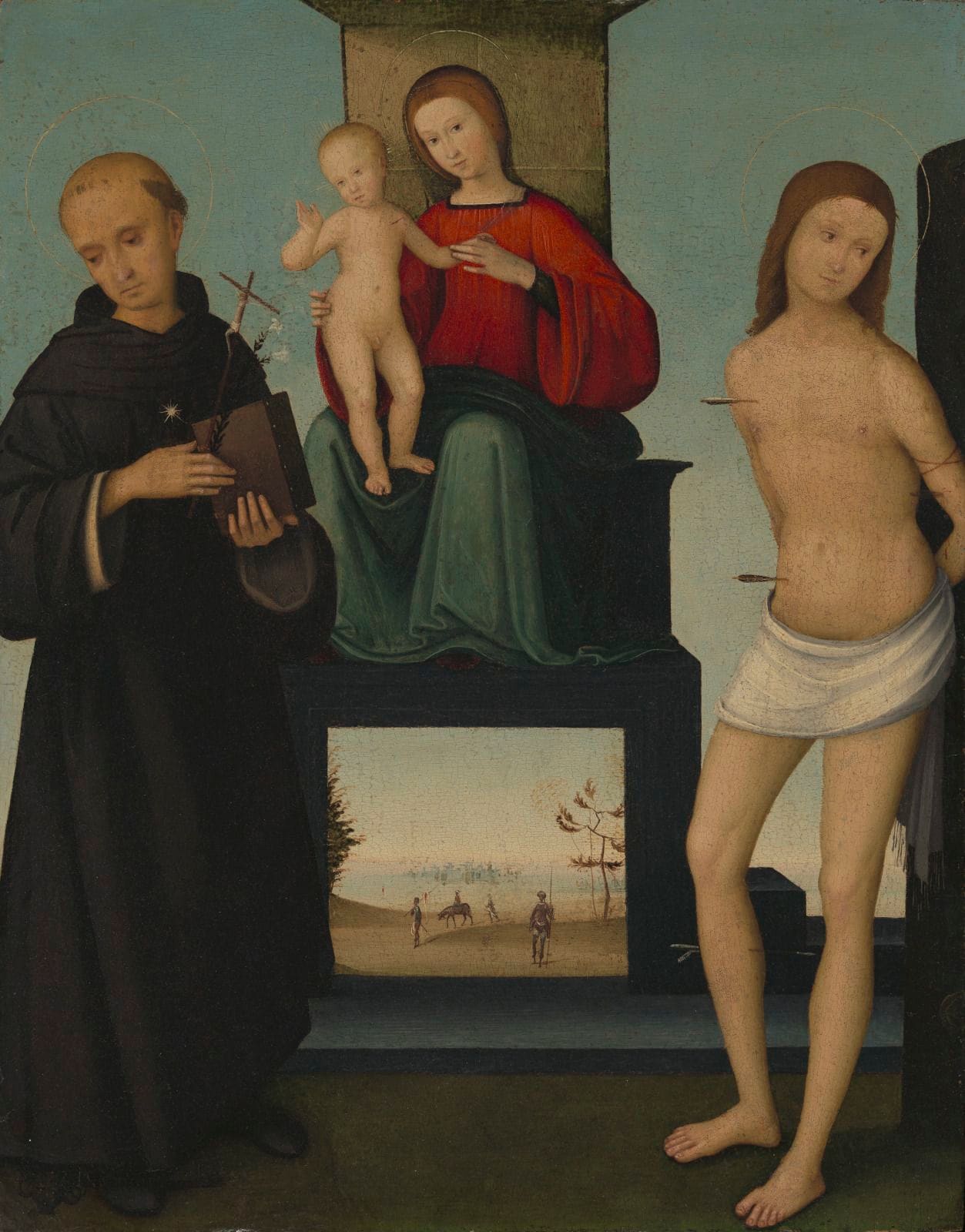 Madonna and Child Enthroned With Saints Nicholas of Tolentino and Sebastian” dates to the mid-1510s.

It may have taken 13 years, but another painting looted by the Nazis during World War II will be given back to the family of Jewish Dutch art dealer Jacques Goudstikker.

The board of trustees of the Virginia Museum of Fine Arts voted last week to return “Madonna and Child Enthroned With Saints Nicholas of Tolentino and Sebastian” to Marei von Saher, Goudstikker’s sole heir. Goudstikker had a vast collection, some of which was looted by Adolf Hitler’s deputy Hermann Göring.

The painting, dating to the mid-1510s, was recovered by Allied forces in 1945 and turned over to the Dutch, with the expectation that it would be returned to the Goudstikker family. Instead, the Dutch government sold it to an unknown buyer. The Richmond museum bought it from a New York gallery in 1958.

Von Saher, who lives in New York, has resolved claims for more than 50 works of art from at least seven countries and more than a dozen museums in the United States and abroad, according to her attorney, Frank Lord. She first contacted the VMFA in 2005, when her claim against the Dutch government was still pending.

“It took some time to resolve the claim, but the process was amicable and relations between the parties have been cordial,” Lord said in an email.

VMFA director Alex Nyerges said: “For us it’s not even a choice — it’s an obligation. A work of art belongs to its owner, and any work that is illegally obtained, in this case stolen by the Nazis, belongs to the original owners.”

Nyerges said the process was complicated and lengthy because it involved trying to verify the history of the work. “We set out to do our research, and we determined it was very likely a Goudstikker painting,” he said. “We asked for their research to show us that this painting was not returned to the heirs when it should have been.”

The reclamation of Nazi-looted art is a challenge for museums around the world and one that has defied a global resolution, according to Jonathan Petropoulos, professor of history at Claremont McKenna College in California and an expert on art looted during World War II. Each claim has its own set of circumstances, and different governments have their own laws. A set of guidelines, known as the Washington Conference Principles, was created in 1998.

“The VMFA did the right thing and acted in a manner consistent with the Washington Conference Principles,” Petropoulos said. “The [museum] merits praise for the decision.”

Goudstikker escaped the Netherlands in 1940 with a logbook that detailed the works he had left behind. The document included an inventory number that was found on the back of the painting, Nyerges said.

The painting was thought to be the work of Lorenzo Costa but is now attributed to the Master of the Risen Magdalen. It depicts the Virgin Mary seated on a throne, holding the Christ child and flanked by Saints Nicholas of Tolentino and Sebastian. It has not been on view recently at the Richmond museum.

The painting is the third Nazi-looted work the VMFA has returned. The others were a 16th-century French painting returned to an Austrian family in 2004 and a Flemish portrait to a Polish family in 2005.

The VMFA also has been on the receiving end of a claim. In 2016, the Museum of Modern Art in New York determined that a major painting by German expressionist artist Ernst Ludwig Kirchner belonged to the same family that had given 200 works to the Richmond museum in a 2009 gift and purchase agreement.

Von Saher continues to seek the return of other works, including two pieces at the Norton Simon Museum in Pasadena, Calif. An appeals court recently dismissed her claim, but according to her attorney, she is planning to file a new petition.

Von Saher thanked the VMFA board for agreeing to return the work, saying in a statement, “It is always gratifying when an institution like the VMFA recognizes the importance of returning Nazi-looted artworks to their rightful owner.”