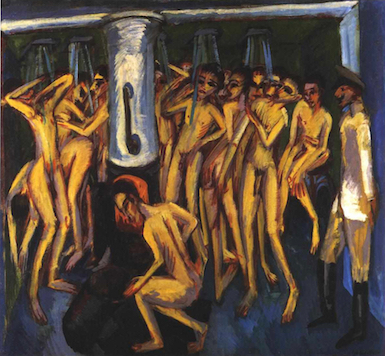 The Guggenheim Museum in New York said today that it has returned the Ernst Ludwig Kirchner painting Artillerymen (1915) to the heirs of one of its previous owners, art dealer Alfred Flechtheim. The work’s restitution follows a two-year research project conducted by the Guggenheim in collaboration with the Holocaust Claims Processing Office of New York State’s Department of Financial Services and the attorneys representing Flechtheim’s heirs, Michael R. Hulton and Penny R. Hulton. Their new research shows that Flechtheim parted with the work following an anti-Semitic campaign against him in 1930s Germany.

According to the Guggenheim’s new provenance work, the painting was owned by Flechtheim, a Jew who lived in Germany, until 1933. When he fled the country amid threats from the Nazis, he transferred the painting to his niece, who committed suicide on the night she was to be transferred to a concentration camp.

Kurt Feldhäusser, a member of the Nazi party, acquired the work in 1938; he held it until 1945, at which point it was turned over to his mother, who consigned it to the Weyhe Gallery in New York. A couple bought the painting in 1952 and, four years later, gave it to the Museum of Modern Art, which transferred it to the Guggenheim in 1988 in exchange for other works.

In a statement, Michael Hulton said, “Overall, restitution is about recognition and paying respect to the suffering of the Nazi victims’ families. This is consistent with the promise that the international community gave us, the survivors and descendants of the victims, in 1998, at the Washington Conference on Holocaust-Era Assets, to remedy the historic injustice of Nazi looted art. The Guggenheim Foundation has been exemplary in fulfilling that promise.”

Richard Armstrong, the director of the Guggenheim, said that the museum was “satisfied that [the painting] will be restituted to the Hultons” in a statement.

The Kirchner is perhaps the most high-profile work to have been involved in a restitution case at the Guggenheim since 2007, when the museum was sued by Julius Schoeps, the director of the Moses Mendelssohn institute for European Jewish studies on the University of Potsdam. Schoeps alleged that his uncle had been the rightful owner of the Guggenheim’s Picasso painting Le Moulin de la Galette, as well was MoMA’s Picasso painting Boy Leading a Horse, and that both paintings were sold by him under pressure from the Nazis. The museums reached settlements with Schoeps in 2009, and the works remain in their respective collections.