How Nazi-commissioned tapestries ended up in the Louvre’s collection 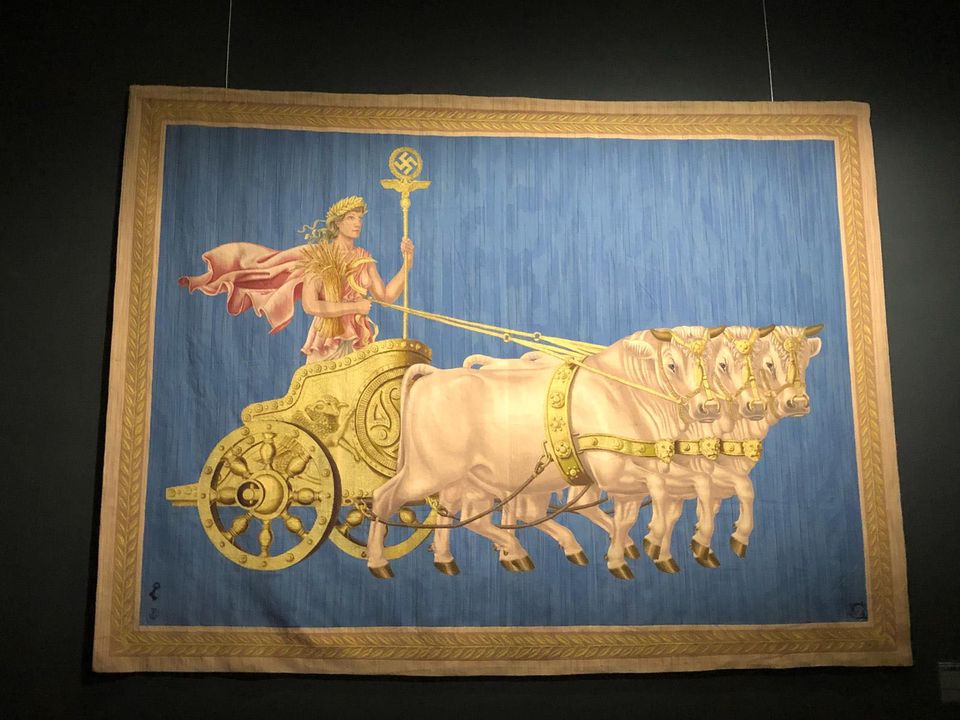 Nearly 100 of the greatest tapestries produced in the past century are now on display at the Musée National des Gobelins in Paris in the exhibition Au fil du siècle, 1918-2018 (until 4 November). All the exhibits have one thing in common: they were made in Paris by the craftsmen and women who have brought glory to the 350-year-old institution. But one of the objects might make people stop and stare a little more wide-eyed: it is the five-metre-wide Die Fruchtbarkeit (Fertility) designed by Nazi leader Hermann Göring’s favourite painter Werner Peiner, who ran the Reichsmarschall’s pet arts and crafts school in German Kronenburg in the Taunus Mountains. The tapestry contains 3.5 kilos of gold thread and depicts a team of bulls pulling a chariot. But the reason visitors are not likely to miss it is the woman at the centre of the composition, who is wearing a toga and holding a gold staff topped with a swastika.

Fertility and its sister tapestry, Der Geist (the Spirit) are both housed (but not generally exhibited) in the Louvre. They were commissioned for the official residence of the Nazi Foreign Minister Joachim von Ribbentrop in Berlin. After the war, they were located by the Allied-led Monuments, Fine Arts and Archives programme, more famously remembered at the “Monuments Men”, in the Hamburger Kunsthalle and reclaimed by the French in 1949. Initially, both E.J.B. Doubinsky, the French representative at the Central Collecting Point in Munich, and the famous French art historian Rose Valland rejected the tapestries, saying they were made in Germany. But a few days later, on 30 May 1949, Valland changed her mind after a conversation with Herr Diezel, the director of the German Gobelin manufactory at Nymphenburg in Munich.

Until recently, many sources have insisted that the tapestries were made in Germany, and that the French had had no right to reclaim them. Previous commissions, such as Peiner’s series of the Five Continents, now in the possession of the German Historical Museum in Berlin and also commissioned for Ribbentrop, had been made at another manufactory in Oberweid/Rhön in Thuringia. When the commission for Fertility and Spirit came in, Nymphenburg was not able to do the work to a sufficient standard. Nor, it seems, was any other establishment in Germany. As the exhibition’s curator Gérald Remy has now made clear, the order to make the tapestries at the Gobelins manufactory in Paris instead was placed on 28 January 1941 by Dr Gerstner of the German Foreign Office. The two finished tapestries were delivered on 29 July 1944—just three weeks before the liberation of Paris from Nazi occupation.

Two other German-designed and commissioned tapestries remained unfinished in Paris at the time—Le Baldaquin (the Canopy) and Le Globe terrestre (the Earth)—both are now in the Louvre as well. The Louvre also possesses a piece featuring a heraldic eagle, dripping with gold, with a swastika at the centre and the initials “A.H.” on either side, commissioned by Hitler himself. That one was indeed made at Nymphenburg and has no established right to remain in France. It is also of no great artistic distinction, however, and that is possibly why Germany has made no move to claim it back.