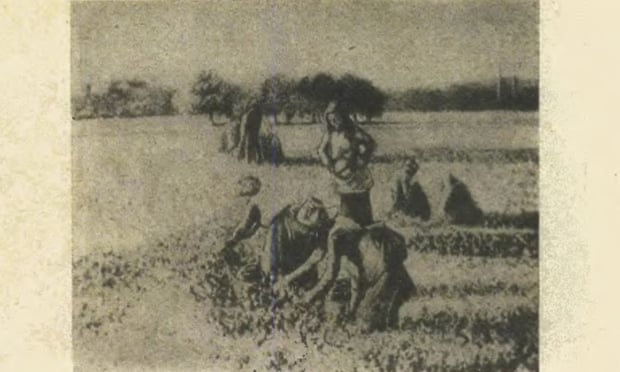 A Paris court has decreed that a Pissarro painting stolen from a French Jewish family during the German occupation must be returned to them.

The painting’s American owners had appealed against an earlier ruling ordering them to hand over the work, called La Cueillette des pois (Pea Picking), saying they had bought it in good faith in 1995.

Bruce and Robbi Toll, wealthy art collectors, said they had no idea it had been seized from a Jewish collector, Simon Bauer, in 1943 by the Vichy government that collaborated with the Nazis.

Bauer lost a total of 93 paintings and was to have been transported to the concentration camps but was saved by a train drivers’ strike.

Between the end of the war and his death two years later he recovered a small number of artworks, and his grandson Jean-Jacques Bauer later took over the search.

The Tolls, who paid $800,000 for the work at auction, lent it to the Marmottan Museum in Paris for a 2017 retrospective on Camille Pissarro. While it was hanging in Paris it was recognised by Jean-Jacques Bauer, who took legal action to have the work impounded.

During a court hearing last May, Bruce Toll said: “French history is none of my business.” He suggested Bauer sue the French state instead of him.

Bauer told Le Figaro: “Contrary to what Bruce Toll claims, I’m not interested in money but in getting justice for my grandfather.”

The court ruled that the Tolls did not act in bad faith when they bought the painting, but declared that sales of all goods looted from Jewish people by the Nazis or the French Vichy regime were deemed to be void by France’s postwar authorities in 1945.

The Bauer family previously received nearly €110,000 (£97,000) in compensation for the painting, and the family lawyer Cédric Fischer said they would return the money once they had the painting back.

Fischer said Tuesday’s ruling “sanctions the right of the victims of acts of barbarity committed by the Vichy regime to recover, without limit of duration, the goods they have been dispossessed of”.

The appeal court ruling is in line with those in similar disputes. Around 650,000 works of art and property were looted from Jewish families by the Nazis and their allies. Many of the works were later sold on to new owners unaware of their provenance.

According to figures released at a Holocaust-era assets conference in the Czech Republic in 2009, around 100,000 works have not yet been returned to their owners.

The Tolls, themselves Jewish and patrons of the Washington and Tel Aviv Holocaust museums, have said they will take the case to the cassation court, France’s highest appeal court.