As a result of proactive research in 2017/2018 the Bayerische Staatsgemäldesammlungen are restituting a work by Ernst Immanuel Müller to the community of heirs of Ludwig Friedmann (30.10.1880–07.03.1943). The painting entitled ‘Bauernstube’ (Farmhouse Parlour) is to be handed over to one of the heirs Miriam Friedmann, a granddaughter of Ludwig and Selma Friedmann on behalf of the community of heirs. This is the fourteenth work to be restituted by the Bayerische Staatsgemäldesammlungen since the ’Washington Principles’ were passed in 1998. As Ludwig and Selma Friedmann were residents of Augsburg and Miriam Friedmann, lives in the city, the restitution will be made at the Schaezlerpalais. It is the community of heirs’ wish that, in future, the painting remain in the family. 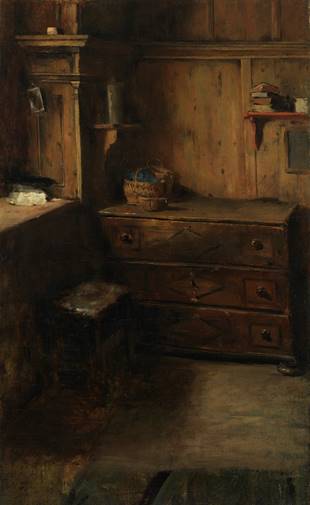 ‘Every restitution is a moving, human act and, in the case of the return of this painting, the preparatory talks held on a personal level were characterized by a feeling of trust and openness. I am pleased that it has been possible to find a solution acceptable to both sides thanks to the family’s cooperation and our proactive research, and that we are now able to return a work of great symbolic value to the family.’

‘Through the restitution of this picture, one small piece in the mosaic that makes up our history has now been returned.’

In May 2017 the Provenance Research Department at the Bayerische Staatsgemäldesammlungen began its reappraisal of acquisitions made between 1933–45. The basis for research work has greatly advanced since an examination of these holdings was last carried out some fifteen years ago. Not least of all thanks to several new online databases was it possible to trace the provenance of this painting in 2017 without any gaps, thus fulfilling the prerequisites for the restitution of this painting to the Friedmann family.

The Friedmanns, a Jewish family, had successfully run a wholesale clothing factory on Annaplatz (now called Martin-Luther-Platz) in Augsburg since 1872 and, from 1930 onwards, at Hermanstrasse 15, operated jointly with business partners. Born on 30 October 1880 in Augsburg, Ludwig Friedmann married Selma Fromm, who was also from a local Jewish family, in 1911. The couple had four children. On 4 June 1919 Ludwig Friedmann purchased this study for ‘Bauernstube’ (ID: 7618) from the Galerie Heinemann, a well-known Munich art dealer. The painting was to remain in Friedmann’s ownership for the rest of his life.

From 1933 onwards the family increasingly became the victim of Nazi persecution. While attacks were initially on a personal level, from 1938 onward these developed into a systematic, state-ordered persecution and an annihilation of the family. The compulsory sale of the business and the house on Annaplatz was ordered and other payments levied. The family was forced to move twice until Ludwig and Selma Friedmann received deportation orders in 1943. At this time all four children were living abroad. Their parents had, however, remained in Augsburg where they had lived and worked all their lives, and where Ludwig Friedmann was vice-president of the Jewish Community. On the eve before they were to be deported, Ludwig and Selma Friedmann took their own lives.

After their death the City of Augsburg’s tax office seized the couple’s entire possessions for ‘further processing’. The furnishings were sent to the ‘Public Welfare Office’; the ‘Bauernstube’ painting to the ‘assets processing department’ at the tax office in Augsburg. At the suggestion of Dr. Hans Buchheit, the director of the Bavarian National Museum at that time, the painting was offered to the Bayerische Staatsgemäldesammlungen whose director, Dr. Ernst Buchner, favoured the acquisition of the painting. This ‘delicately and intimately executed work of great artistic value by a Munich painter’ was ultimately bought in May 1943 for the sum of 128.40 Reichsmarks. To date no compensation has ever been paid to the family for the loss of this painting. Its restitution is based on the recognition of the non-binding principles and objective to identify and return works of art and cultural assets illegally seized during the Nazi era in accordance with the terms of the ‘Washington Principles’.

The community of heirs is now scattered across three countries. All members were contacted through the help of Ms. Friedmann, the sole member of the family to be living once again in Augsburg. The Bayerische Staatsgemälde- sammlungen would especially like to thank the family for its extraordinarily positive and open cooperation, the enormously binding sense of trust and the moving personal meetings and discussions. Flowers were placed by the Bayerische Staatsgemäldesammlungen on the ‘Stolpersteine’ (so called Stumbilingstones) commemorating the Friedmann family at Martin-Luther- Platz 5, in Augsburg.

The Bayerische Staatsgemäldesammlungen, represented by the Director General Prof. Dr. Bernhard Maaz, and Miriam Friedmann, as the representative of the family.

All participants would like to express their gratitude to all those at the Schaezlerpalais and to its director, Dr. Trepesch, for making such a fitting location available for the restitution of the work in Augsburg.

Ernst Immanuel Müller, little is known about him other than when he was born and died and when he studied. He is known primarily for his genre depictions of peasant characters and scenes. His few interiors include the undated ‘Study for a Farmhouse Parlour´, the undramatic realism places the artist in the tradition of pupils from the Munich School. The unspectacular detail of the painting, with its almost documentary-like approach, depicts the sparse and functional furnishing of a room in a farmhouse, bathed in a warm light and colours, without prettifying the scene.

We owe Prof. Maaz, Director General of the Bayerische Staatsgemäldesammlungen in München and Frau Anja Zechel M.A., from the Division of Art Provenance Research sincere thanks for the sensitive way they have treated the tragic history and the descendants of my grandparents, Ludwig and Selma Friedmann.

75 years after the Shoah this painting, though small, has great symbolic value, particularly for me, who has lived in Augsburg since 2001 and intensely concerned myself with our extinguished history – a history that was robbed from my family and so many others who shared the same fate.

Through the return of this painting we receive an object which once brought joy to my grandparents. As Mrs. Zechel’s meticulous research shows, my grandparents were able to hold on to this painting, even as they were dispossessed of their other possessions and forced to live in cramped quarters, in a so-called ‘Jewish house’. On the eve of their deportation, they committed suicide, together with 3 other couples, who were close friends.

It was painful for my parents, aunts and uncle to speak about the past and, therefore, a chapter from all our lives remains missing. The return of the painting gives us back a small stone in the mosaic of this history. In an attempt to fill the remaining gap, the film-maker Josef Pröll and I have made a documentary film, ‘Die Stille Schreit’® (‘The Silence Screams’®), which shows how the perfidious Nazi system destroyed our family and the former Jewish community of Augsburg. The premiere will take place in the near future.

Press Department at the Pinakotheken