The Saga of “The Oyster Meal” 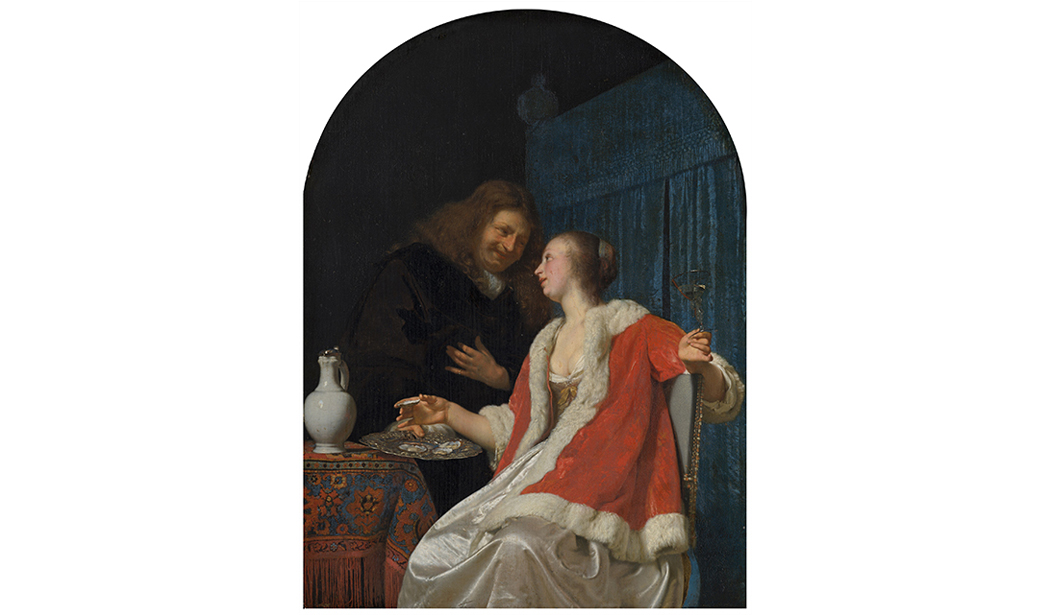 The stolen “Oyster Meal” was probably inspired by this 1661 version by Frans Van Mieris the elder, a more established painter. Oil, 27.6 cm X 20.8 cm (Courtesy of Mauritshuis, The Hague)

Charlotte Bischoff van Heemskerck is 97 years old now, but she still has a very clear memory of how she felt about an Old Master painting by Jacob Ochtervelt that her father, a doctor, hung in the patients’ waiting room in their home when she was 15.

“I loved her beautiful dress, the red coat,” she said. “My father taught me how to look at it, how he painted the light and dark. It was one of our favorites.”

“The Oyster Meal,” painted circa 1664-65, depicts a scene of seduction: A young man dressed in finery presents a silver plate of six oysters to a beautiful young seated woman wearing a dazzling blue silk gown and a red jacket trimmed with ermine. Distracted by the suitor, she loosens her grip on her wine goblet, and a dog leaps up to lap up the spilling wine.

Her father, Dr. Joan Hendrik Smidt van Gelder, had put the painting, along with others from his collection, into a bank vault in her hometown of Arnhem, the Netherlands, before he’d gone into hiding during World War II. The bank and the paintings were looted by the Nazis toward the end of World War II, when the Germans evacuated the residents of Arnhem and stole all they could from the town.

“You can’t believe it, what they stole: Every cup, every plate, every everything…” remembered van Heemskerck in an interview in Amsterdam recently. “We had nothing left when we came back. We had to build it all up. There was no time to say, oh, we missed the paintings.”

Van Heemskerck didn’t see “The Oyster Meal” again for some 70 years after it was looted, until she encountered the work at the Mansion House, the official residence of the Lord Mayor of the City of London in late 2015. Decades of searching, ultimately with the aid of the Commission for Looted Art in Europe, also in London, had led her back to the painting.

“When I saw that again, I felt it the same as I had as a child,” said Van Heemskerck, who is the last surviving sibling from her family but she has four children, many grandchildren and is expecting her 10th great-grandchild this year. “I was immediately sure; there was no question about it.” Her recognition of the work was not sufficient to make a claim, however, and it took the commission about another year to research the missing provenance history that would establish ownership, but the Mansion House officials were very swift in their response: Restitution was arranged within three months of the submission of the documentation, in November 2017. George Gordon, co-chairman of Old Masters worldwide for Sotheby’s, said the painting is likely to attract attention from top international museums as well as private collectors, and he mentioned that the market for such Old Master works has expanded recently, with “a particularly receptive audience for these kinds of works now in the Far East.”

It does have an illustrious history. In the 19th century, “The Oyster Meal” was owned by the Comte de Morny, Napoleon III’s half-brother and an influential French art patron. Later, it was acquired by the Dutch banker and art collector Henri Louis Bischoffsheim, who hung it in his home, the Bute House in London, which is now the Egyptian Embassy. Over the years, it has been exhibited at the Metropolitan Museum of Art, the Barbican and the Frick.

Most recently, the painting was part of the “Vermeer and the Masters of Genre Painting,” an exhibition of Dutch domestic interiors presented at the National Gallery of Ireland in Dublin, alongside similar genre scenes by Frans van Mieris, Jan Steen and Gerard ter Borsch.

In his exhibition catalog essay, “The Food of Love,” Mauritshuis Old Masters curator Quentin Buvelot said Ochterveld’s work presents a common theme in Dutch 17th-century genre painting: “A man offering a woman oysters as a symbol of carnal love.” Buvelot characterizes the work as a “variant” of one of the most popular paintings by Van Mieris, a more established painter. Buvelot writes that the woman’s pose in the Ochtervelt was “clearly inspired” by Van Mieris’s earlier painting, also called “The Oyster Meal” of 1661, “without actually quoting it literally.” He finds the figures in Ochtervelt’s work “somewhat stiff and wooden in character” by comparison.

Gordon, at a preview of the work in Amsterdam, said, “It is certainly one of the greatest paintings by Ochtervelt, whose output could be uneven over the years. But this is him when he was at his best.”

Van Heemskerck’s father, Dr. van Gelder, ran the charitable Children’s Hospital in Arnhem, and bought the painting in the 1930s from the private dealer D. Katz of Dieren, in Holland. He had long been an avid collector of art, antiques and furniture; or as his daughter recalls, someone who “ate only oranges as a student so that he could save his money for art.” Old Masters were his bailiwick, and he assembled a collection of works by Salomon van Ruysdael, Jacob de Wit and Jan van Huysum.

His close attention to the details of the paintings allowed him to provide extraordinarily specific written descriptions of all his works to authorities after they were looted. He died in 1962.

Anne Webber, co-chair of the Commission for Looted Art in Europe, said this “was enormously helpful to us when we were trying to locate the painting.”

Van Gelder was not Jewish; he went into hiding in 1943 because, while tending to the sick daughter of a Nazi commander, he mentioned the advance of Allies on the Eastern Front, tipping them off to the fact that he was listening to British radio. He left his home before security forces came to arrest him. A year later, the Germans had one of their greatest wartime victories in the Battle of Arnhem; all of the city’s residents were forced to evacuate, and his wife and children did their best to hide the art that remained — unsuccessfully.

“After the war, we all said, we are safe and sound, nobody was killed and nobody ended up in prison camps. We had to go on,” said van Heemskerck. “The Germans had really stolen everything. My father never complained about the loss of the paintings and neither did we. But little by little they came back. And that was always a wonderful surprise.”

The family contacted the Commission for Looted Art in 2015, seeking help locating the work. There were a few paintings that one of the grandchildren had seen on the Internet they thought might be “The Oyster Meal.” The painting at the Mansion House was one of them. They arranged to visit the house, and found out that the work’s published provenance had a significant gap from 1936 to 1965.  “Assuming it was the same painting, we already knew where it had been from 1936 to 1945,” she said. “So, we had to fill in the gap between 1945, when it was stolen from the bank in Arnhem, until 1965, when it shows up at a gallery in Zurich.”

Over the next year, Webber and her research team were able to track the movements of the painting from Arnhem to Dusseldorf and from there to Switzerland, and to collect all the necessary evidence to support a claim. The speedy restitution of “The Oyster Meal” has been a great pleasure for van Heemskerck, who has finally had a chance to adore the painting once again.

“I would have loved to have it in my home because I love the painting,” she said. “I’m one of six children and they all have their heirs, so it’s not mine,” she added. “When I die, they have to sell it anyway, so I sell it now. It’s with pain that I sell it. But life is full of pain, I can’t avoid it.”

The article appears in the July edition of Art+Auction.