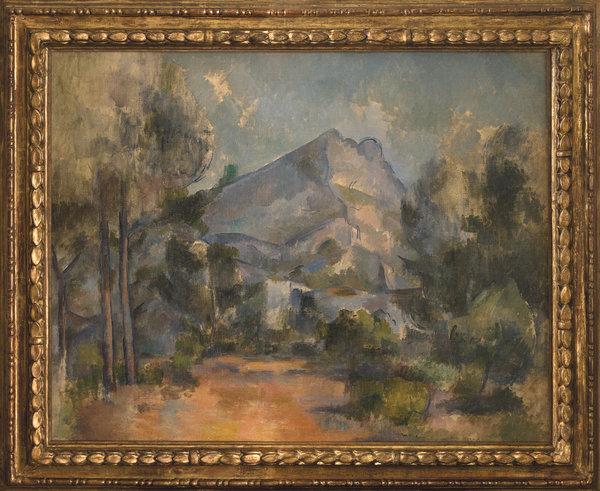 “Montagne Sainte-Victoire,” by Paul Cézanne, will be shared between museums in Switzerland and France.

The family of Paul Cézanne and the museum in Switzerland that holds the controversial art collection of Cornelius Gurlitt have settled a dispute over the ownership of a majestic landscape by the artist, “Montagne Sainte-Victoire,” painted in 1897.

The painting is one of the most important of the works bequeathed to the Kunstmuseum Bern by Mr. Gurlitt, a recluse who hoarded about 1,500 artworks, some looted by the Nazis, in his homes in Munich and Salzburg, Austria. In 2012, German authorities seized the art hidden in Mr. Gurlitt’s Munich apartment on suspicion he was evading taxes.

Mr. Gurlitt inherited many of the works, including the Cézanne, from his father, Hildebrand Gurlitt, a dealer who purchased art in occupied France for Adolf Hitler’s planned Führermuseum in Linz, Austria. The Cézanne is known to have been in the possession of the artist’s family until at least 1940.

It is unclear how Hildebrand Gurlitt acquired it, according to Nina Zimmer, the director of the Bern museum, but it is also not apparent that it was looted by the Nazis.

Under the terms of the agreement, the Bern museum will loan the painting to the Musée Granet in Cézanne’s hometown Aix-en-Provence, France, for about three months a year.

“Both museums benefit from this agreement, and this way no money needs to change hands and the painting doesn’t have to be auctioned,” Ms. Zimmer said by telephone. “We have done a great deal of research on this painting, and have no more ideas of where to look. There is a provenance gap, so if that is filled and it is suddenly discovered to be Nazi-looted art, we will find a new solution.“

The Bern museum, to its surprise, was named the sole beneficiary of Mr. Gurlitt’s will in 2014. Six works in the collection have been definitively identified as plundered by the Nazis or sold under duress. Another 61 are suspected of being looted, and research on many more is not yet conclusive enough to rule out Nazi theft. The museum addresses the complexities of the research in its second exhibition about the Gurlitt hoard, titled “Gurlitt: Status Report — Nazi Art Theft and Its Consequences,” which runs until July 15.

Cézanne produced at least 40 oil paintings and 40 watercolors showing the mountain ridge east of Aix, according to his great-grandson Philippe Cézanne.

“But as far as I know, there is only one other Cézanne painting of Sainte-Victoire in a French museum, and that is at the Musée d’Orsay,” he said.

The family says the artist had given the painting to his sister Marie, who bequeathed it to her nephew, Philippe’s grandfather. It was among the artworks the family deposited in a safe shared with Pierre-Auguste Renoir’s family at the Banque de l’Union Parisienne in 1940 to protect them from Nazi looters. The Nazis temporarily impounded the vault, though the seizure was subsequently lifted when they established that the owners were not Jewish. All trace of “Montagne Sainte-Victoire” after that is lost. The first mention of the painting in Hildebrand Gurlitt’s correspondence is in 1947, when he sent it to a restorer.

“There are still a lot of questions,” said Philippe Cézanne. “So we are happy with this gentlemen’s agreement.”