The Big Move to Berlin’s Humboldt Forum Has Begun, as Pressure for Restitution of Colonial-Era Objects Grows

The German Lost Art Foundation's expertise in researching Nazi-era loot could expand as demands for restitution grow at home and abroad. 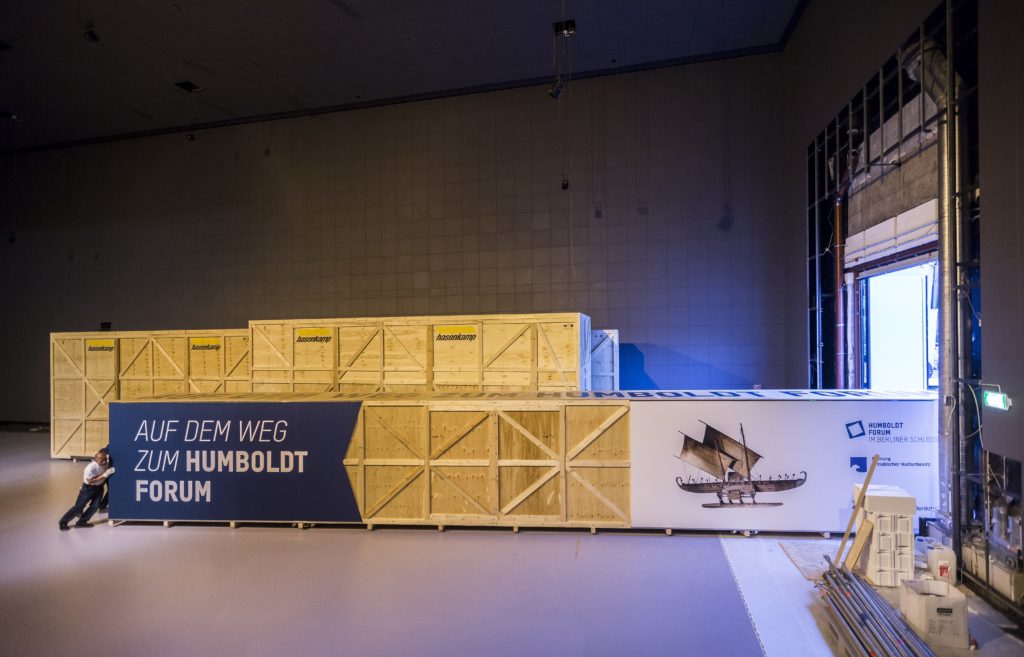 The transport of the South Sea boats from the former Ethnological Museum in Dahlem to the new Berlin Castle.

Gathering inside the colossal construction site that is Berln’s Humboldt Forum late last month, officials donned museum-branded hard hats to witness the first ethnographic objects arrive to the replica Prussian-era palace. It is a symbolic event that launches a complicated move of thousands of non-European artifacts from Dahlem in the west of the city to their controversial new home in the heart of the German capital. The procession of objects will continue daily this summer while the museum readies to launch with a soft opening in 2019.

The first object to arrive on May 29 was a 52-foot-long crated boat from the South Seas. The fishing vessel originally came from Luf, an island that now belongs to Papua New Guinea. Part of the country was under German colonial rule between 1884 and 1914 and the highly prized ship was purchased in 1903. The acquisition was made in a period that the country’s culture minister Monika Grütters has recently dubbed the nation’s “cultural blind spot.” No mention of the boat’s colonial context appears in the Humboldt Forum’s official statements, however.

Outside the museum anyways, a heated political debate has been aroused by this new museum and its large holdings of colonial-era objects. A new light is being shone on the troubled history of ethnographic collections not only in Berlin but across the country, as well as in London and Paris. After so many years, the controversial provenance of some colonial-era objects in Germany is beginning to receive something of the scrutiny so far devoted to Nazi-era loot. 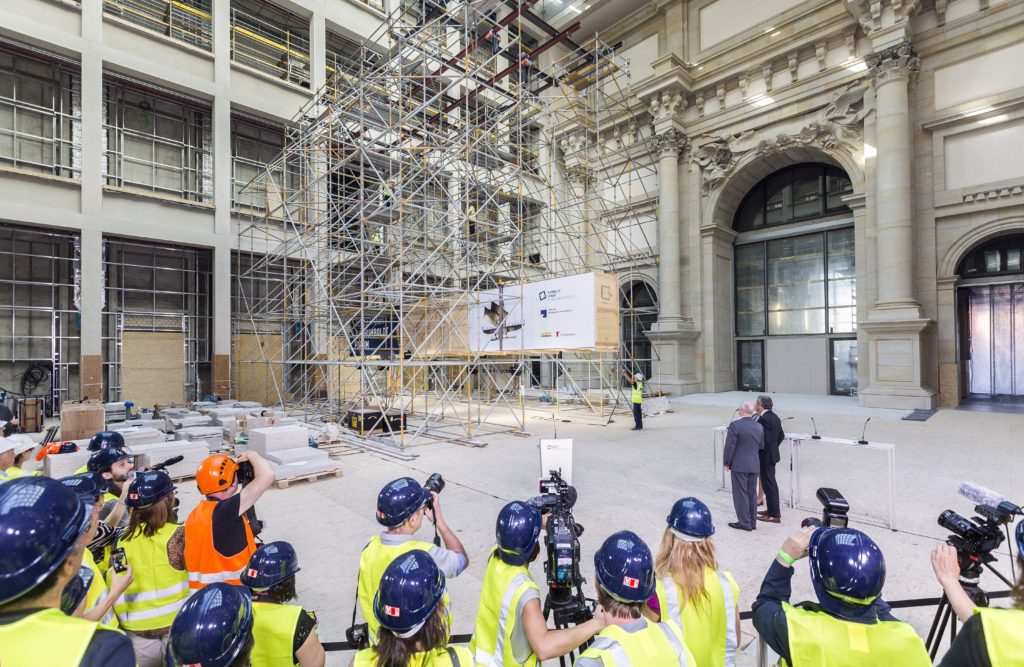 The transfer of the South Sea boat from the former Ethnological Museum in Dahlem to the new Berlin Palace.

Grütters and Hermann Parzinger, the president of the Prussian Cultural Heritage Foundation, stood by to welcome the South Seas boat move into a dark hole on the second level of the Humboldt Forum. “We are here. We have arrived,” Parzinger announced before Grütters, playfully referred to as commander, called out: “Lift!” Slowly, the crated vessel was cranked into the belly of the museum, taking around around 20 minutes. The opening in the wall will be bricked up after the remaining large objects are transported into the museum.

“All objects, whether great or small, from the Dahlem museums can expect to be seen by crowds of visitors in the heart of Berlin,” Grütters said in a statement. “That’s what I wish for them, at any rate.” But how realistic the culture minister’s wishful words will prove to be remains to be seen. 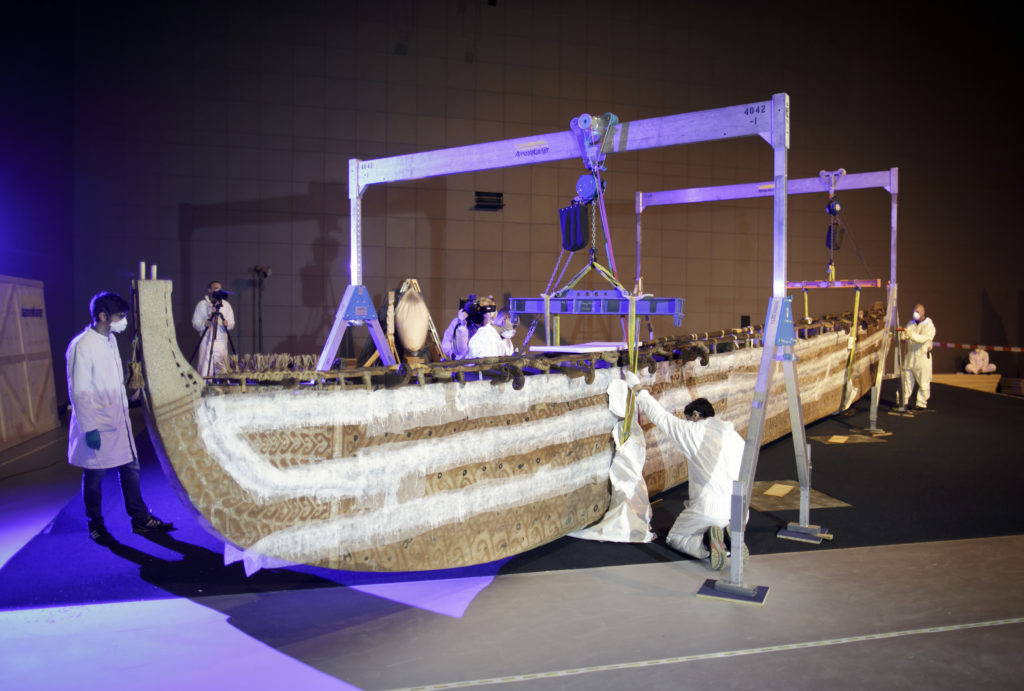 The sailing boat is prepared before its move from the Ethnological Museum in Dahlem.

The collection being moved is enormous: around 20,000 objects from holdings which include 500,000 objects in total. Neither a complete inventory nor intensive provenance research has yet to been done on a majority of the artifacts, Margareta von Oswald, a researcher at Berlin’s Center for Anthropological Research on Museums and Heritage, tells artnet News. Nor could it feasibly be by the time they have all arrived at their newly home, she adds.

A 70-strong team of conservators and researchers are preparing the objects to be moved, many of which have not received appropriate care in the past. Some of the objects are in poor condition and due to their organic material, they need to be checked for insects. They call this multi-step processing between Dahlem and Berlin “Restaurierungstrasse,” or restoration street. 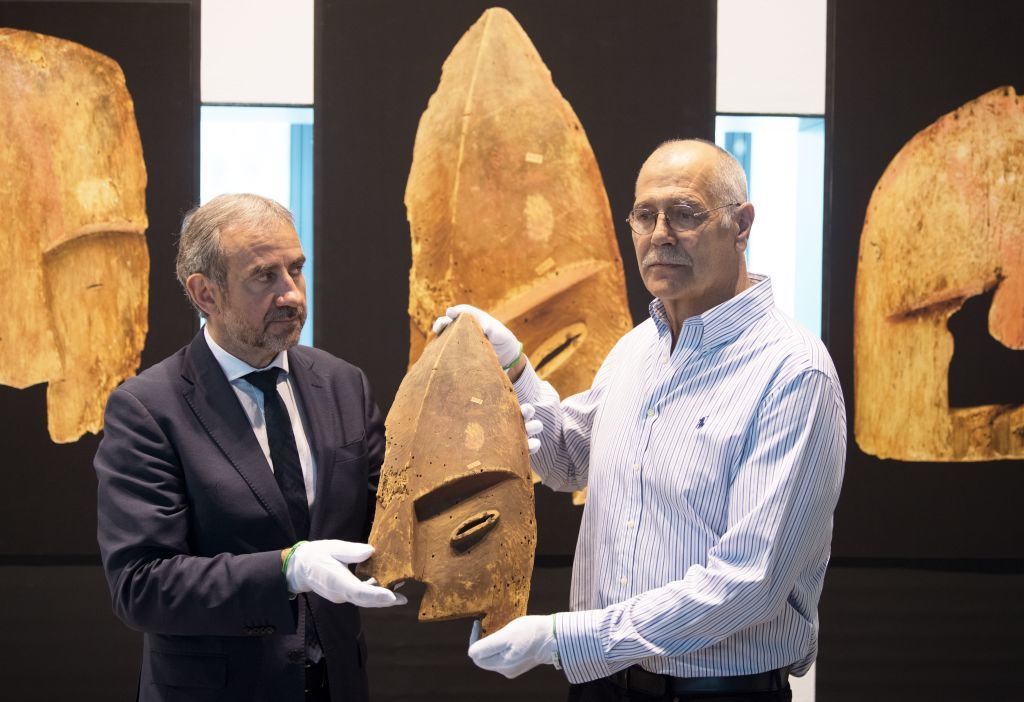 Hermann Parzinger (left), the president of the Prussian Cultural Heritage Foundation, and John Johnson from the Chugach Alaska Corporation, during a restitution ceremony in Berlin in May.

A first draft of guidelines for dealing with artifacts acquired during the colonial era was published last month after two intense years of activity. Called the Guide to the handling of collectibles from colonial contexts, the 136-page document was published by the German Museums Association and includes the vexed issue of restitution.

“Restitution is not requested very often,” says Wiebke Ahrndt, a professor of ethnography who led the working group that drafted the guidelines. She is also the director of Bremen’s Überseemuseum in Bremen, a natural history and ethnographic museum in the German port city, which has a vast collection of 1.2 million objects from Asia, Oceania, Africa, and America. “It is absolutely not daily business.”

Ethnographic restitution cases are different, as it can be difficult to decide who might be the rightful owner of an artifact. Claims for Nazi-era looted art are typically made by a particular family or individual heir—in former colonies, lineage may be hard to trace, or have been eradicated altogether. In some situations, former colonial countries do not want objects back right away, says Ahrndt, because it might empower certain parties over another. Due to old laws, the conditions of return make restitution a legal nightmare for source communities.

“It’s definitely not an easy task,” says Ahrndt. “It’s very often difficult to decide to whom to restitute. In our guidelines we state that you should be willing to restitute, if you think that something is in your collection illegally or unethically.” 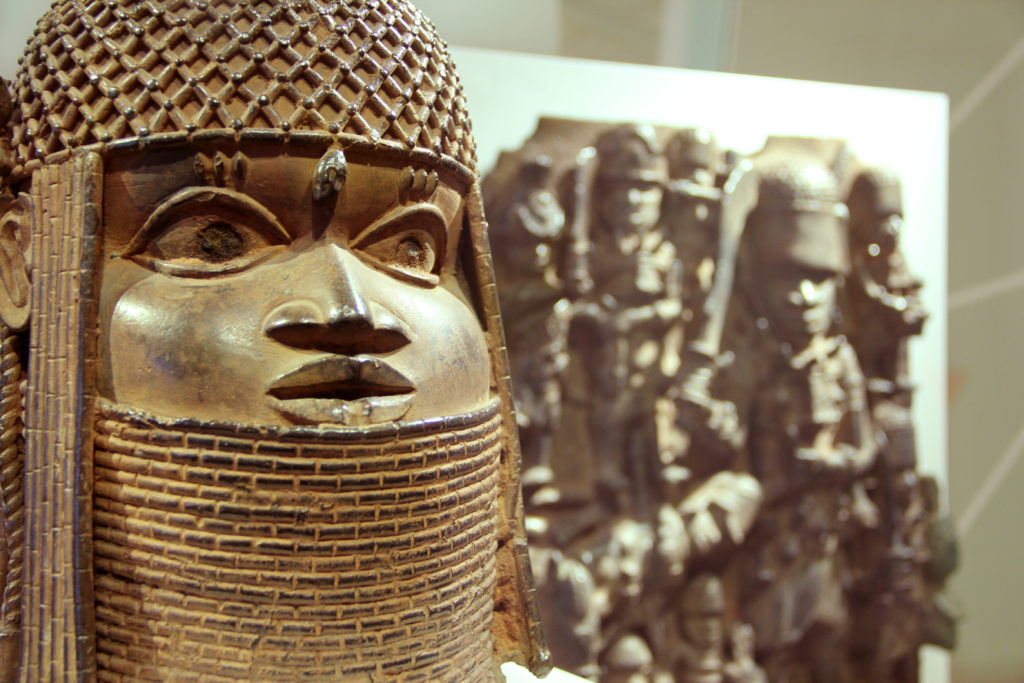 Exhibition view of “Looted Art? The Benin Bronzes” at MKG in Hamburg.

But some have been critical of this more nuanced position on colonial-era objects, especially when compared to the French President, Emmanual Macron’s apparently hard-lined approach to create a policy that will establish the conditions for returning African artifacts within the next five years. Ahrndt says this difference in approach is partly due to the differing structures already in place in the two countries. “In Germany, the way to restitution is already open. President Macron said as that he will open the possibility to make it possible [for French museums] to restitute [objects].”

Western museums prefer talking about loans and international co-operation projects with institutions in source countries than the thought of restitutions. They also stress the cost and complexity of provenance research. Many have only digitized a fraction of their collections. “Museums need money,” says Arhndt. “What we often receive from source communities is not email request for returns but requests on digital data. They want to know what we have. And I think they are right. We need transparency.”

For some, the new guidelines do not go far enough. The campaign group No Humboldt 21 was quick to call out the German Museums Association for taking a soft approach. The group criticized the guidelines, saying in a press release that it was based on “oppressive colonial legislation.” The group has accused the German Museums Association of distancing itself from “the French initiative for the restitution of African cultural and artistic treasures.”

The Tanzanian founder of the organization Berlin Postkolonial, Mnyaka Sururu Mboro, said in response to the guidelines: “We are waiting for an honest acknowledgements of colonial injustices and steps for reconciliation over a violent past. Restitutions are an integral part of it, and they should take place sooner than later.”

So far the voice of source communities is absent, but that is not because it won’t be considered, eventually. The guidelines document is a work in progress and so the hope, on both sides, is that it will improve and gain a more balanced perspective by the time of final publication next year. “Obviously the working group was not very diverse, because it consists mostly of academics who work in German museums or universities. None of us really comes from the countries or societies where the collections originated,” says Larissa Förster, of the Center for Anthropological Research on Museums and Heritage. She was one of the members of the working group that drafted the document. Invited international experts are due to meet at the end of October in Hamburg for a first revision. The German Museum Association said that, as a first step, the guidelines could be formulated by German museum professionals and academics in order to address and provide guidance to colleagues around Germany, she says. 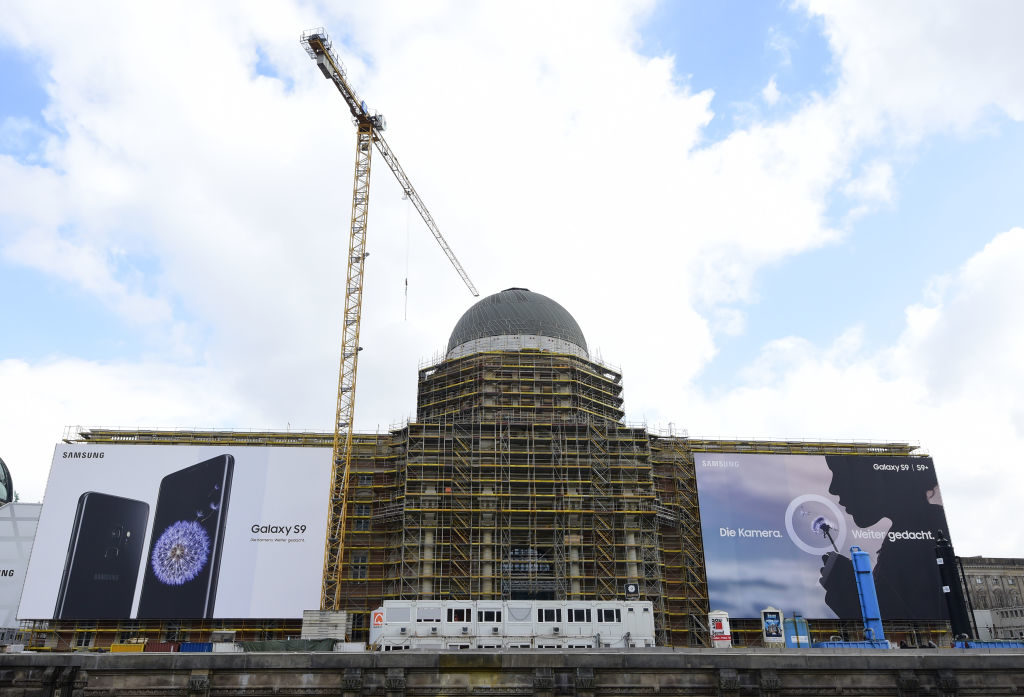 The facade of the Berlin Palace (Berliner Stadtschloss) under reconstruction.

Learning From the Lost Art Foundation

Another important development in dealing with these collections lies with The German Lost Art Foundation. The foundation was established in 2015 to vet and provide grants for museums to investigate their collections for Nazi-looted art. In late April, it was announced that the foundation will be allocating government grants to museums for provenance research into artifacts acquired from former colonies. The grants they will set up will help the country’s museums research their collections of non-Western objects.

Last year, it announced they were expanding to include cases around Stasi-looted at from the former East Germany.

“We were wondering in what direction the public debate was going to go and who could possibly become responsible for handling this new field,” says Gilbert Lupfer, a member of the executive board of the German Lost Art Foundation. “In our everyday communications with the government, hints accumulated that this new field of activities might be allocated to us.”

Lupfer says that next year, the foundation may be able to launch pilot projects to test how they could roll out this new program dedicated to colonial-era objects. It’s an exciting prospect, but still all very new for the Magdeburg-based organization. Lupfer hopes funds will be available as soon as next year.

“In our view, what makes it sensible to put this new field within our organization is that many of the structures of the grant system will most likely be similar. There is already a lot of expertise as to efficiently execute grants, and, we are well established as a platform that deals with lost art from the 20th century,” Lupfer says.

Expanding the foundation’s remit indicates how seriously the German government is taking the issue of colonial-era objects, though the situation at the Humboldt Forum remains contentious. For now, everyone is waiting for the new federal budget to be confirmed, to see just how much financial support will support this new field of work and recruit the experts it requires.

“The big question right now,” Lupfer says, “is whether insights from the way that the German Lost Art Foundation’s grant proposal program is currently run may be used to do something equivalent for colonial-era goods, or, whether it has to be adjusted in principle.” Whether colonial-era restitution has anything to learn from Nazi-looted art is an open question, and how the drafted recommendations could bring real effects to source communities feels, for the moment, unclear. The pressure is on Germany, and the world is watching.