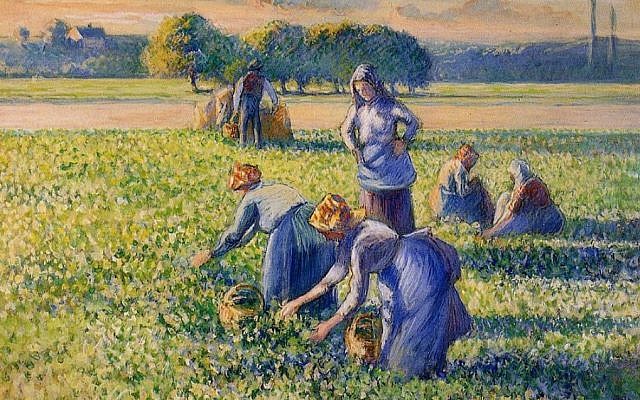 After a hearing on Wednesday, the Paris Court of Appeal will decide in October whether a painting by impressionist master Camille Pissarro, seized from its French Jewish owner by the Nazis during World War II, should be returned to the owner’s descendants or to an American couple who purchased the painting in 1995.

“La Cueillette des Pois” (Picking Peas), a painting from 1887, was put on display in early 1997 at the French capital’s Marmottan Museum, more than 70 years after being snatched from art collector Simon Bauer in Nazi-occupied France.

The courts have been been examining the case for rightful ownership — Bauer’s descendants or an American couple, Bruce and Robbi Toll, patrons of Washington and Tel Aviv Holocaust museums, who say they were unaware of the painting’s wartime fate when they bought it at a 1995 auction in New York.

In November 2017 a Paris court ruled that the painting should be returned to the Bauer family. The Tolls appealed the ruling, leading to Wednesday’s hearing.

“La Cueillette des Pois” was one of 93 works confiscated from Bauer before he was sent to the Drancy internment camp near Paris.

Upon his release in 1944, he immediately began looking for his paintings but had only managed to recover a fraction of the works by his death in 1947.

His family then took up the hunt, but lost all trace of the Pissarro for half a century before it turned up at the Marmottan, on loan from its current owners for a major retrospective of the artist’s work.

Bauer’s grandson Jean-Jacques Bauer, 87, immediately filed a legal claim to prevent the painting from leaving France while beginning a process to try wrest it back from the Tolls.

In May 2017, a court granted his request to have it impounded in France pending a ruling on its ownership.