Christie’s Sold This Swiss Dealer a Painting Likely Looted by the Nazis. Now He Wants His Money Back

Alain Dreyfus says the auction house should have known about the painting’s dubious provenance.

How long after a sale—and under what circumstances—is a buyer entitled to a refund?

That’s the question that has surfaced in a dispute between a Swiss art dealer and Christie’s auction house. The dealer, Alain Dreyfus, wants Christie’s to pay him back for a painting he bought in 2008 that later was determined to have been looted by the Nazis during World War II.

The trouble began two years ago, when a Canadian company that specializes in recovering looted assets, Mondex, contacted Dreyfus about Alfred Sisley‘s petite canvas Premier jour de printemps à Moret (1889). Dreyfus bought the painting at an Impressionist and Modern art day sale at Christie’s New York in November 2008 for $338,500 with premium, according to the artnet Price Database.

After identifying the painting on Dreyfus’s website, representatives for Mondex informed him that the work had been stolen by the Nazis in 1940. The rightful owners were the heirs of the Lindenbaum family, who today go by the name Lindon-Citroën.

Mondex determined that the painting had passed through the hands of Nazi leader Hermann Göring because it was listed in an inventory of artworks confiscated from Jewish people by Hitler’s “Special Task Force” (the ERR database), the company’s James Palmer tells artnet News. Göring’s initials are listed on a card that accompanied the painting.

The work has since been placed under sequester by the Swiss police. Although it still sits in Dreyfus’s storage, he no longer has the right to sell it. 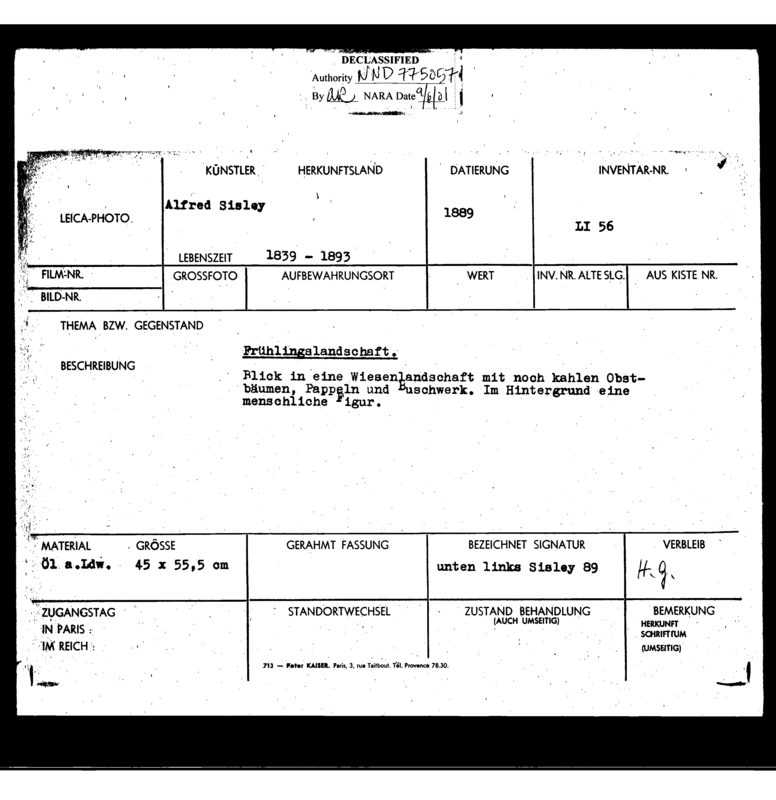 A copy of the ERR index card referring to Alfred Lindon’s Sisley, with Herman Goering’s initials in the bottom right-hand corner.

Dreyfus has said he will return the painting to its rightful owners, but he wants Christie’s to reimburse him. “Christie’s had to know all of this! When you sell a painting, you do research,” Dreyfus told the French newspaper L’Alsace. (Dreyfus did not immediately return a request for comment from artnet News.)

At the time Dreyfus purchased the work, the provenance listed five prior owners, including the French dealership Wildenstein et Cie., which has been embroiled in a number of controversies over Nazi-confiscated art. The family of the owner who consigned the painting to Christie’s acquired it from Wildenstein around 1972.

Dreyfus told L’Alsace that he sent a bill for €700,000 ($817,000) to Christie’s Zurich branch a month ago, asking for the value of the work plus eight percent interest. Having received no response from the auction house, he now says will take up the “unpaid invoice” with Basel’s prosecution office and has hired a PR manager to campaign against the company unless he is refunded.

A spokesperson for Christie’s tells artnet News that at the time of the sale, all the known provenances and accessible history were “extensively researched” and referenced in the Christie’s catalogue.

“At the time, there was no discoverable information that could or would directly connect this specific work with the claimant family and no active claim on the work,” the spokesperson explains. The representative pointed out that the current claim is based on information that became available only after Christie’s 2008 sale to Dreyfus; the ERR database was not digitized until 2010.

The auction house says it takes matters involving works subject to Holocaust restitution claims “very seriously” and has made multiple attempts to gather the concerned parties—Dreyfus and the Lindon-Citroën family—around a table to resolve the situation. “In this matter, while we are not formally involved in the legal proceedings nor is the work still under warranty, we have attempted to bring together parties to work for a solution,” the spokesperson says.

As part of its due diligence, the auction house notes that it checks every lot consigned for sale against internal databases of sensitive names and restitution claims as well as multiple external resources such as the Art Loss Register. Many more historical records and exhibition catalogues have become available online since 2008, including the Hermann Göring Art Collection database.