A “dark story” may finally get a happy ending. 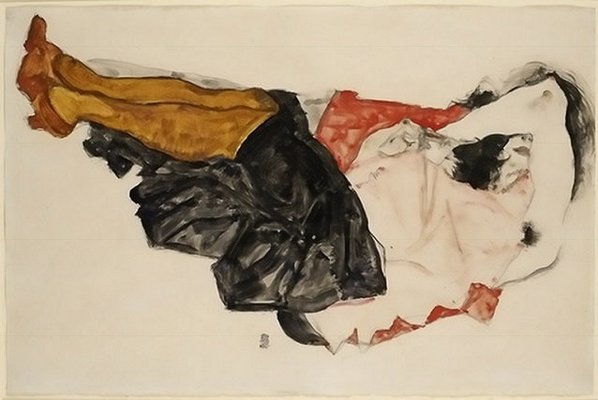 In a lawsuit dating back three years, a State Supreme Court judge ruled last month that two Nazi-looted artworks by expressionist Egon Schiele must be returned to the heirs of an Austrian Jewish Holocaust victim whose art collection was systematically stolen by Adolf Hitler’s army in 1938, marking one of the first successful applications of the Holocaust Expropriated Art Recovery Act, or HEAR Act, passed by Congress in 2016. The act is designed to ease the statute of limitations for heirs seeking to recover Nazi-looted artwork.

The two disputed Schiele drawings—“Woman in a Black Pinafore” and “Woman Hiding Her Face”—was part of a 449-piece collection, which included 81 Schiele works, owned by Fritz Grünbaum, a well-known cabaret performer in Vienna who often criticized the Nazis before being murdered in the Dachau concentration camp in 1941. The drawings are worth an estimated $7 million.

“It’s a really dark story,” said Raymond Dowd, a Westhampton Beach resident who is an attorney and partner at Dunnington, Bartholow and Miller in New York City. In 2015, Mr. Dowd filed a lawsuit against London-based art dealer Richard Nagy of Richard Nagy Ltd, who had purchased the drawings in 2013. Mr. Dowd argued that the paintings should be returned to Mr. Grünbaum’s heirs.

In 1999, an Austrian court declared Milos Vavra—who is a descendant of Mr. Grünbaum’s sister, Elise Zozuli—and Leon Fischer—who is the grand-nephew of Mr. Grünbaum’s wife, Elisabeth Grünbaum—as heirs to the estate. However, Mr. Fischer died in 2013, so Mr. Fischer’s share would go to his heirs, Timothy Reif and David Fraenkel.

“Growing up, I would hear about him constantly from my grandmother, [Else Reif],” Mr. Reif said.

His grandmother always spoke of Mr. Grünbaum’s generosity, explaining that he was always supportive of young comedians and musicians in the theater. Particularly after the Depression started, actors would often come to Mr. Grünbaum for “loans,” and he would invariably help them without any expectation of them repaying him, Mr. Reif recalled.

She also always said that Mr. Grünbaum loved to kid around and make fun, and was very clever and witty. “I remember her literally calling me her ‘little Fritz Grünbaum,’ I suppose because I had a mischievous streak,” Mr. Reif said.

He added that when he was older his father would tell him stories of survivors of Dachau, who spoke of Mr. Grünbaum entertaining them with his derisively anti-Nazi routines and humor, trying to keep their spirits up as much as he could.

“He understood the risks and dangers and did it anyway,” Mr. Reif said. “He was a person of exceptional courage and principle.”

On April 5, Mr. Reif and his family finally regained an integral part of their history and, perhaps more importantly, a sense of restored justice for the man who had shown bravery in the face of persecution when Justice Charles Ramos ordered that the two paintings be turned over to the heirs.

“The HEAR Act compels us to help return Nazi-looted art to its heirs,” Justice Ramos wrote in his 16-page ruling.

Prior to the HEAR Act, heirs who filed claims could not reliably recover stolen property if their claims exceeded what’s known as the discovery rule, which posed the question: “When would a reasonable person discover it?” Mr. Dowd said. “When you look at the six million murdered [in the Holocaust] and say, ‘Well their kids should have found a museum in Toledo and found their paintings,’ it’s not quite fair.”

Now, under the law, plaintiffs have six years after discovering the stolen property to argue their case. Mr. Dowd said he became aware of the two pieces on November 15, 2015, when former National Public Radio journalist David D’Arcy contacted him, letting him know he’d discovered the Schiele drawings in Mr. Nagy’s booth at the 2015 Salon Art + Design Show on Park Avenue in Manhattan. Mr. D’Arcy recognized the two watercolors from a Swiss art gallery catalog published in 1956 that listed Mr. Grünbaum as the owner, Mr. Dowd said.

Since 2015, both paintings have been housed in a fine art storage facility in Queens.

“No one was quite sure how it would play out,” Mr. Dowd said of the HEAR Act. “This judge gave a decision that really reinforced the act. It’s really an important victory.”

“The decision was really the first vindication since Mr. Grünbaum’s death,” Mr. Reif added. “It was a very important step in capturing a small part of the dignity that was taken from him.”

In 2005, before the passing of the HEAR Act, a federal judge ruled against the three heirs as they attempted to recover another painting owned by Mr. Grünbaum: “Seated Woman With Bent Left Leg (Torso).” The court ruled that too much time had passed since the artwork was purchased by a Boston businessman in 1963, causing evidence to be lost.

Mr. Nagy, who claims he has good title to both “Woman in a Black Pinafore” and “Woman Hiding Her Face,” is planning to appeal the judge’s decision, arguing that Mr. Grünbaum’s sister-in-law, Mathilde Lukacs, sold 45 Schiele works to a gallery in Switzerland in 1956, Mr. Dowd said. However, Justice Ramos ruled that there was no evidence that Ms. Lukacs had good title to the works.

According to Mr. Dowd, in 1938, Nazi soldiers forced Mr. Grünbaum to sign a power of attorney permitting his wife—who was arrested by the Nazis in October 1942 and died shortly after—to liquidate his property. “The art dealer is saying this was all voluntary, which is disgraceful,” he said.

“A signature at gunpoint cannot lead to a valid conveyance,” Justice Ramos wrote in his ruling, noting that the “gut-wrenching process by which Mr. Grünbaum’s property was looted” undermined any future claim of ownership by Mr. Nagy.

Mr. Dowd said the case revealed overwhelming evidence that Mr. Nagy had acquired the Schiele paintings after knowing of Mr. and Ms. Grünbaum’s murder as well as the family’s claims—after obtaining the artwork, Mr. Nagy had purchased fine art title insurance through ARIS Title Insurance, specifically naming each of the heirs in his policy.

“We were in shock that someone would buy something knowing that someone claimed it was stolen,” Mr. Dowd said. “They took a big gamble and they lost.”

Still, not all is resolved. If Mr. Nagy’s attorney, Thaddeus Stauber—a partner in Nixon Peabody LLP’s commercial litigation and international arbitration group—appeals the court’s decision, the heirs will be unable to execute their plan to auction the two paintings in November at Christie’s Auction House in New York. The heirs intended to auction the artwork within a few days of the 100th anniversary of Schiele’s death on October 31, 1918.

While Mr. Dowd intends to file to expedite the appeal, pointing to both Mr. Vavra’s age, 76, and the upcoming auction, it’s not guaranteed that the court will grant it.

“These adversaries hope that everyone will just die out,” Mr. Dowd said. “The question is: Will the judge let the adversary block the sale?

“Even though I think there’s no chance that they can win, you never know,” he continued. “Some of the people holding on to these things are very powerful. It’s tough when you go into court against heavyweights.”

In a prepared statement, Nina Hartl, the director of the London-based Richard Nagy Ltd., said that Mr. Nagy’s ownership of the Schiele paintings was well documented. She noted that Mr. Nagy had hired Holocaust provenance experts Sophie Lillie, Laurie Stein and Lynn Nicholas to vet and issue independent reports on the modern-day claims.

“Had any one of them found that the Schiele artworks were owned by Fritz Grünbaum and stolen by the Nazis, Richard would not have hesitated to restitute them,” Ms. Hartl wrote. “As an art dealer with a long record of working with German Expressionist artworks, and someone whose own family had to flee persecution, Richard is particularly sensitive to restitution claims and continues to believe that all such claims call for close and merit-based review.”

As for the rest of Mr. Grünbaum’s collection, Mr. Dowd said the remaining 446 pieces have been scattered across the country. He mentioned that several have been located throughout the years at Oberlin College in Ohio, the Morgan Library and Museum and the Museum of Modern Art in New York City and the Art Institute of Chicago.

In fact, upon originally filing his case against Mr. Nagy, Mr. Dowd attempted to bring one lawsuit against those museums, but the judge would not allow it.

While museums are held to the same statutes put in place by the HEAR Act, they are potentially protected under a statute of limitations defense.

However, rather than file nearly 30 lawsuits against numerous museums throughout the country, Mr. Dowd has taken his argument to local libraries.

This year, Mr. Dowd has presented several free lectures at public libraries in Westhampton Beach, Quogue, Southampton, Cutchogue, Shelter Island, Hampton Bays, Amagansett and Greenport. His goal: to spread the word about stolen artwork, hoping that museum officials will “do the right thing.” Mr. Dowd is also scheduled to speak at Mattituck Laurel Library on Friday, July 13, at 6 p.m.

“What museum director is going to question the donor who gave the Picasso to the museum?” Mr. Dowd asked. “They literally don’t look to see if it’s stolen.

“Museums need to be looked at a little more closely,” he continued. “They need to clean up their act.”