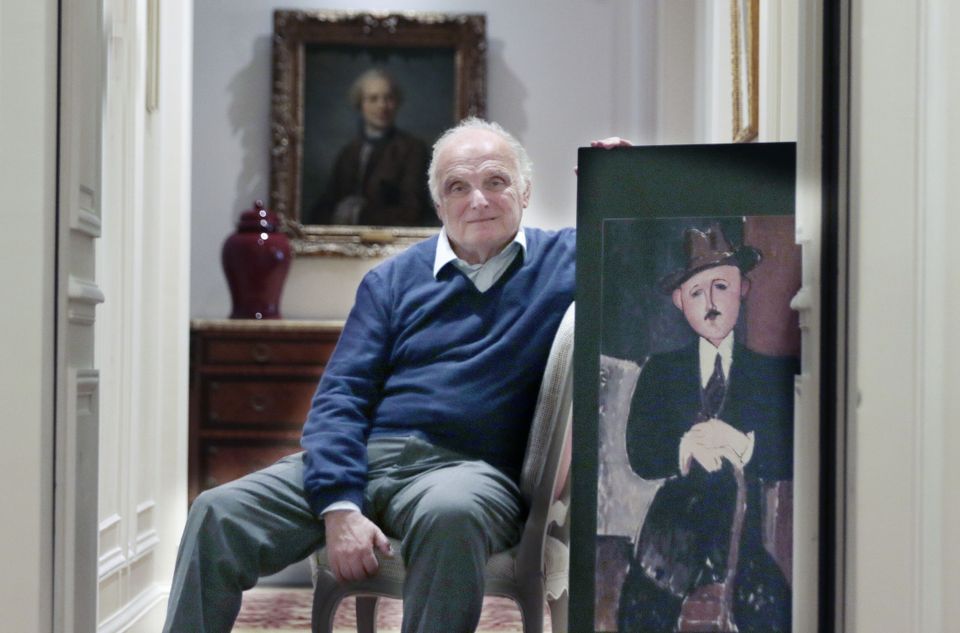 The art dealer David Nahmad with the painting by Modigliani

The powerful art-dealing Nahmad family was dealt another blow in a long-running legal battle over the ownership of Amedeo Modigliani’s Seated Man with a Cane (1918), when a New York State judge denied their motion to dismiss the case on Wednesday (18 April). Reading her 40-page decision from the bench over three hours, Judge Eileen Bransten ruled that the case would be considered under New York law because it had a greater interest in protecting its art market from trafficking in stolen art. “New York is not and shall not become a safe harbour for [art pillaged] during Nazi genocide”, she said.

The lawsuit has rumbled on for years as the Nahmad family maneuvered to keep its ownership secret. The painting was allegedly confiscated in 1944 in Nazi-occupied Paris from the Jewish collector and art dealer Oscar Stettiner and was purchased in 1996 for $3.2m at Christie’s. In 2008, the painting failed to find a buyer when offered at Sotheby’s in New York, apparently because of a concern that it might have been looted. In 2011, Stettiner’s grandson, Phillipe Maestracci sued Helly Nahmad and his gallery, where the painting had been exhibited, to recover the work, which he estimates is now worth $25m. But the Nahmads said the painting was actually owned by the Panamanian corporation International Art Center (IAC). The case gained worldwide attention in 2016 when the Panama Papers, leaked from the law firm Mossack Fonseca, revealed that IAC was a shell company wholly owned by David Nahmad.

Last year, an appeals court rejected the defendants’ argument that the lawsuit was barred by the statute of limitations, relying on the recently enacted Holocaust Expropriated Art Recovery (HEAR) Act. This time around, a key issue was whether the case should be decided under the laws of New York, France or Switzerland. US courts will apply another country’s law when appropriate to a specific case. The defendants argued that French law should apply because, among other things, Maestracci is French and the Modigliani was allegedly looted in Paris. But the judge noted that, according to the defendants, the plaintiffs would not be able to recover the painting under French law if it had been purchased in good faith.

In New York, though, a thief can never pass on good title. That means that if the plaintiffs prove the Modigliani painting was taken from Stettiner by the Nazis, IAC could not legally own it. Citing a New York Times article in which David Nahmad said: “The International Art Center is me… It’s David Nahmad”, the judge also ruled that he and corporation are alter egos, which means that David is responsible for IAC’s actions and liabilities.

Phillip Landrigan, the lawyer for Maestracci and George Gowen, the administrator of Stettiner’s estate, called the decision a “complete victory” for his clients. The defendants—David Nahmad and IAC, along with Helly Nahmad and his New York gallery—will appeal, says their attorney Richard Golub. If the plaintiffs “had proof the painting belonged to Oscar, we would have tried to resolve this earlier,” Golub says. But, he says, Seated Man with a Cane is not the same painting Stettiner owned, “so it’s much ado about nothing… They can win a motion to dismiss, but at trial it will be completely different”.