These glorious hats have a tragic history

A collection of hats that tell the story of a Jewish shop owner before, during and after WWII are going on display in Munich 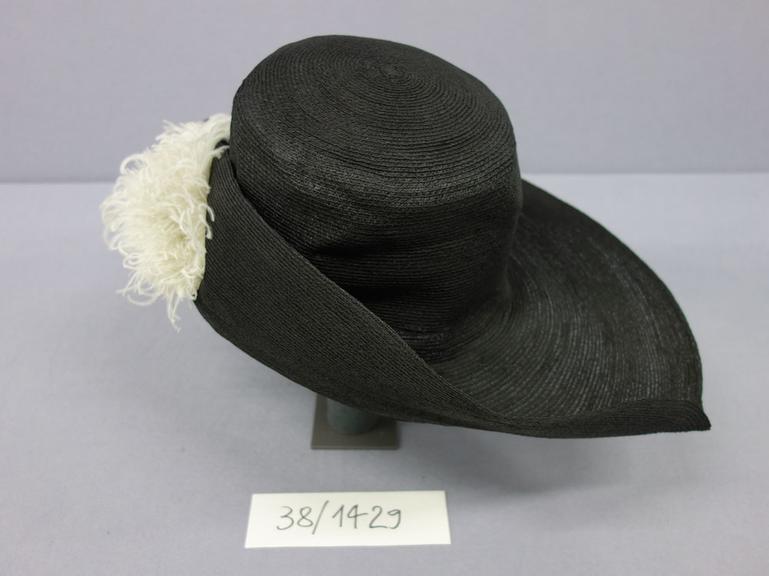 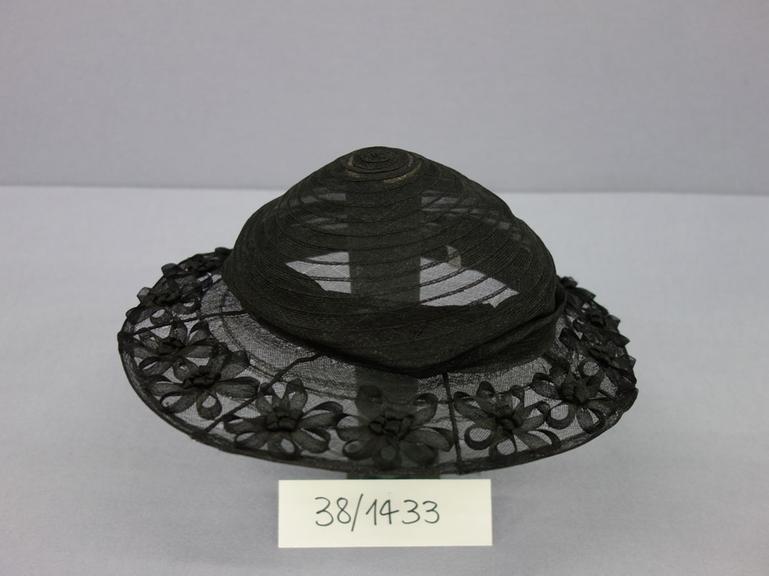 It was June and very hot all over Europe, at least 30 degrees that day, last summer in Munich. And we were late.

Our meeting had been arranged for 2pm at the depot of the town’s City Museum. The depot, not the museum itself. I had read that in the email, printed off the address and then totally forgotten the depot bit. So my husband Michael, our researcher Beate and I sat in the waiting area of the actual museum wondering why no one was expecting us.

After about ten minutes, we worked out why no one had come to find us. A light bulb went off in my mind: oh how on earth could I have forgotten that, how embarrassing, how dreadful, silly me. Because one thing about my parents was that they were never late, they had real German punctuality, you could set your watch by them.

Off we dashed to get a taxi to the depot. It was not easy and then we had at least a 20-minute ride. Beate did her best to hide her own dislike of being less than punctual. We arrived 40 minutes late for a two hour meeting and were shown straight in to meet about five staff members in white coats, all waiting for us. They were all extremely welcoming; but did they have the same ideas about punctuality as my parents? Oh, how mortifying.

Then the curator of textiles, in white gloves, showed us a spread of beautiful, wide, white cardboard boxes. Inside, about 100 hats were each stored carefully in a nest of acid-free paper. Most were straw, summer hats with silk ribbons. 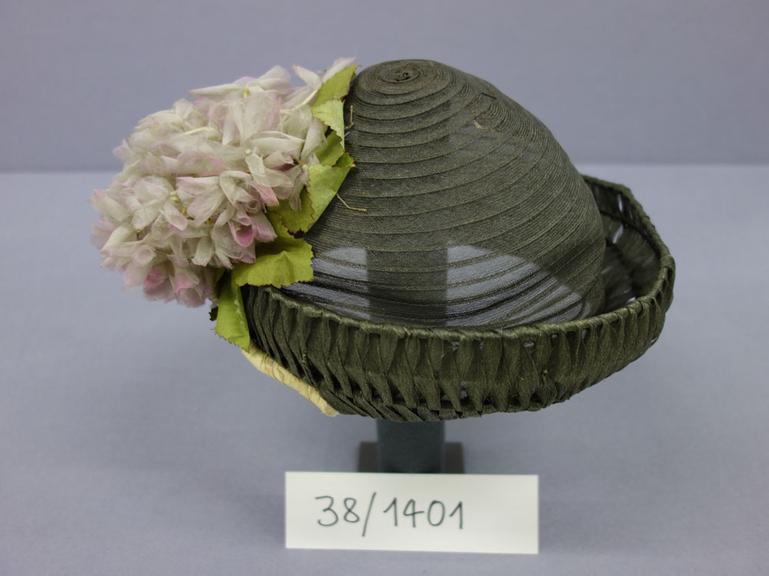 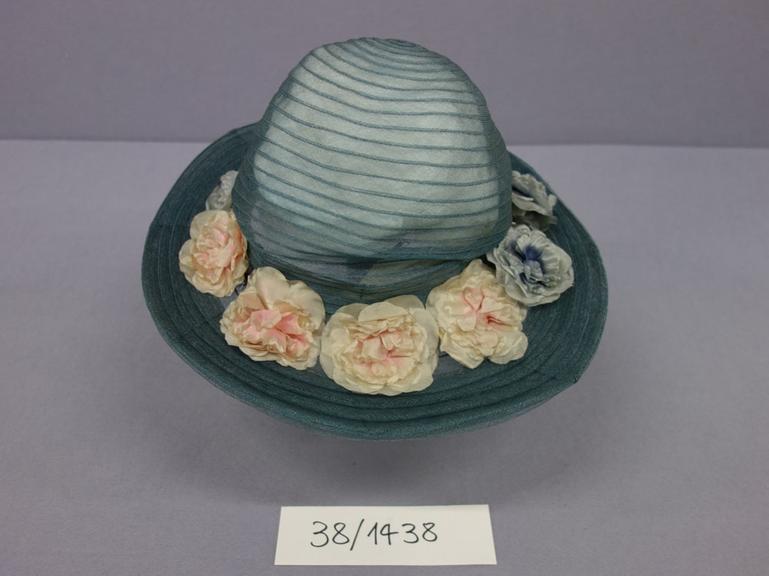 And I just could not stop trying them on. My flustered embarrassment faded away and I felt strangely happy. As I put one hat down, like an addict I had to pick up another. Often, I laughed at myself in the mirror. (And sometimes I admired myself, too) 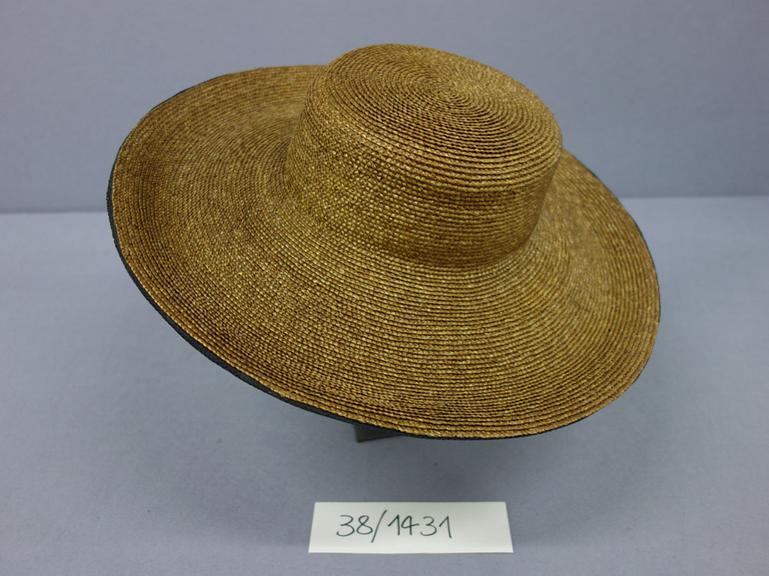 My husband just sat and waited, as any husband would while his wife tries on hats. 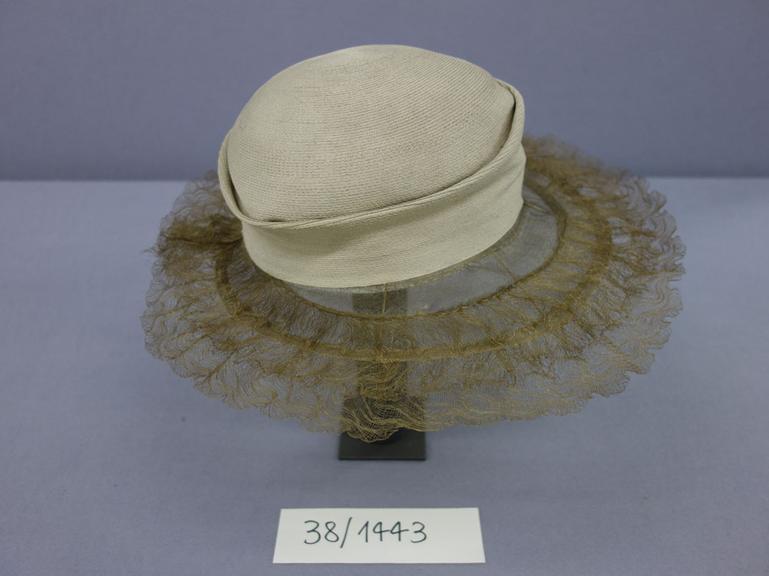 The hats were all colours: red, blue, beige, yellow, grey, navy, black, with ribbons and trimmings sadly faded and frayed. There was one rare winter hat — a big black furry one. A navy straw hat with a huge, wide brim as if for Ascot. A tiny little hat like a cottage loaf, trimmed with brown velvet, which perched on top of your head. Hats worn tilted sideways, hats worn tipped forward and hats worn straight. 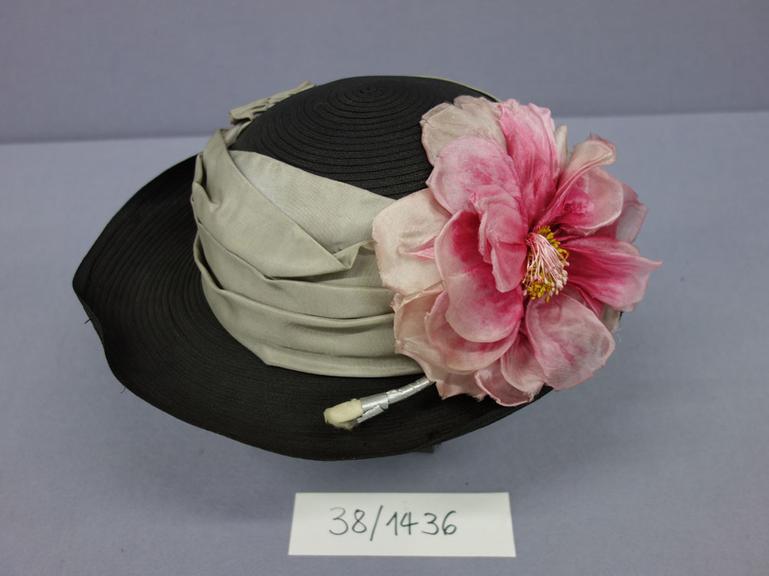 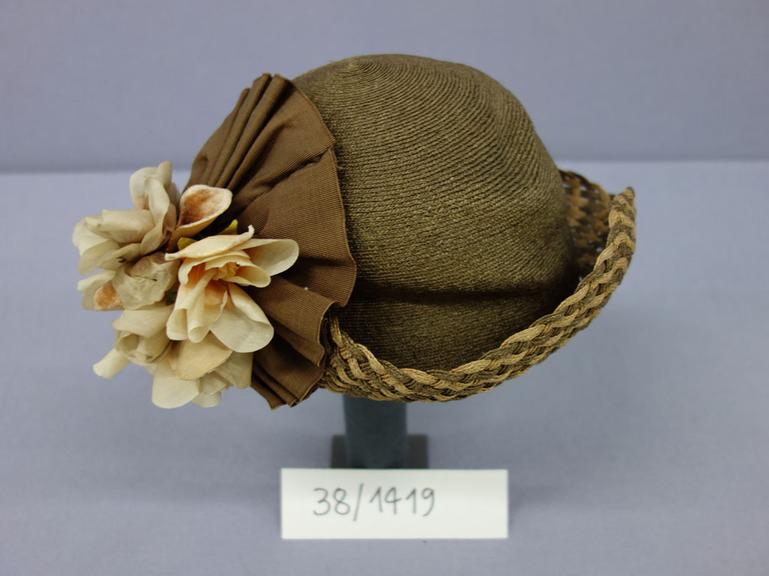 Hats with draped chiffon, blue flowers, pink flowers, cream flowers, all designed with the most elegant tones. The curator explained how the silk had worn away, even touching the ribbons might displace some silk fibres on to your fingers. 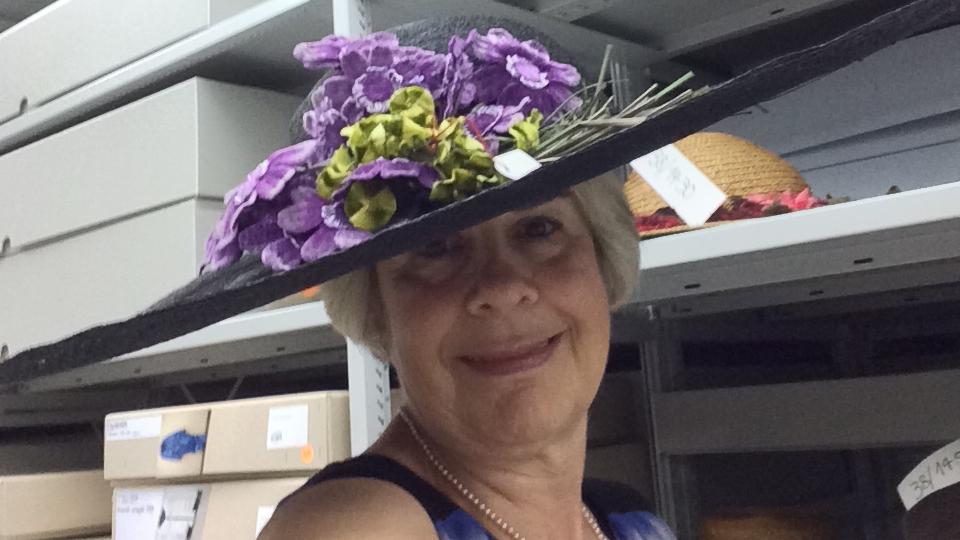 Hazel Stein models a hat from her family’s shop

I was so absorbed that I didn’t stop to think how the hats had got there. But I did have a vague thought about the fashionable women of Munich, in search of a hat for a special occasion, who would visit and try on the these hats, in the shaky times before the Second World War when things could still be normal.

That shop was my grandfather’s. These hats were his stock. And that’s why I was trying them on. A few months earlier, I’d received an amazing email from the City Museum in Munich enquiring if I was the descendant of Heinrich Rothschild, former owner of the Rothschild hat shop. Somehow they had found my email address, probably because I have been researching my family tree.

They informed me that they were preparing an exhibition on the history of the museum under the Nazis, to show how far the museum and its staff were involved in the Nazi policy of aryanising Jewish businesses, persecuting Jewish owners and confiscating their goods during the years from 1933 to 1945. They wanted to include the story of the hat shop located near the museum. They had known for some time that they possessed 91 hats from that shop.

From my mother, I have a sense of how our family, who had lived in Germany for hundreds of years, was torn asunder when the Nazis came to power. Contact would have been difficult while they were building new lives.

My great-grandparents, Heinrich and Minna Rothschild, had four children: Otto — my grandfather — Lilli, Josef and Adele. Three had children of their own, and most of the descendants of those who escaped Germany live in the US.

My mother came to London on her own at the age of 16. Her parents, who finally got to New York in February 1941, later received restitution for the theft of the business. The only souvenir that I have from the shop was bought from eBay — four “reklamermarken” or poster stamps. These are collectibles; many businesses had them, to stick on bags and other items for advertising. They show elegant hats with long feathers. I also remember an elderly cousin talking about “going to Onkel Heinrich for a new hat for Yom Tov”. I certainly never thought I’d see those hats for myself.

Heinrich must have been quite a character and well-known. His hat shop would have been the go-to place in Munich for your new hat. He is actually mentioned in a novel, Erfolg (Success) by Lion Feuchtwanger, in which, chillingly, an antisemite insists that my grandfather is a member of the banking dynasty and part of a secret society. “When it was pointed out to him how improbable it was that a very wealthy man would personally serve the customers in his shop and fit hats on their head, the chauffeur Ratzenberg, slicing up a young radish in proper style, explained that was the very thing that was suspicious and displayed the underhand cunning of those despicable dogs.”

From 1933, under the Nazis, the story of Hüte Rothschild went downhill — first boycotted, then taxed. It was sold to an employee, when Jews weren’t allowed to own businesses, and finally the business was liquidated. The Nazis just walked in, removed the stock and machinery. My grandfather Otto was forced to hand over the key. He was imprisoned several times.

Many Germans enriched themselves in this way, by taking the assets and careers of Jewish citizens, wiping out their record of their contribution to the welfare of the city, and finally deporting them to be murdered.

As for the hats, in 1939 the director of the City Museum, Konrad Schiessl helped himself to 91 of them for a pittance, adding them to the museum’s fashion section.

In a photo of the shop after the Kristallnacht, November 1938, the windows are all boarded up and covered with large Nazi posters and swastikas. People are walking past and seem to be avoiding looking at the shop; only a small boy stares at it, his mother holds his hand and rushes him past. 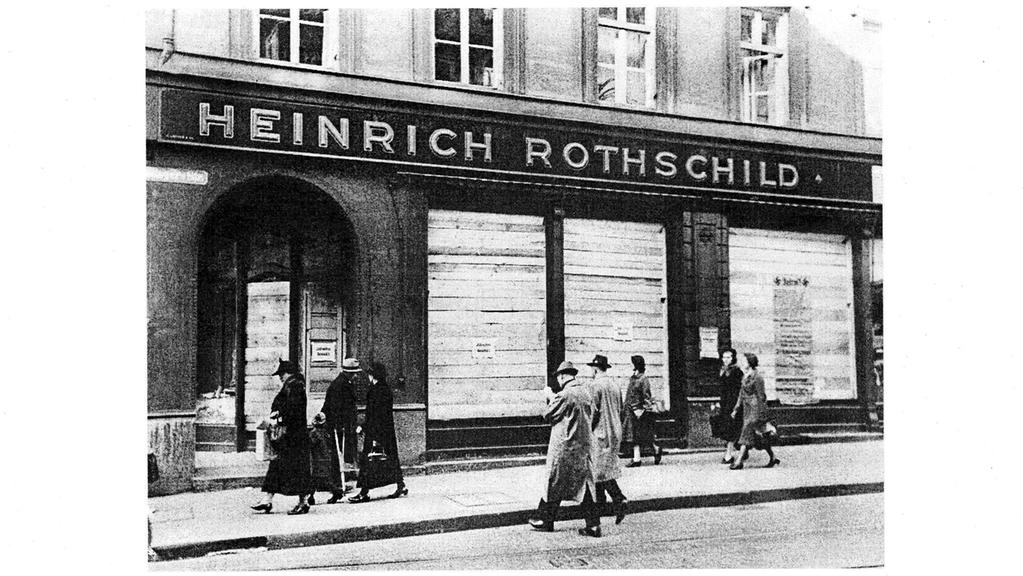 The hats have sat in storage in the museum for decades. But now they are about to be put on show, which I think is a remarkable and candid thing to do.

This is the first museum in Munich to investigate the provenance of artefacts acquired during the Nazi period. “The exhibition offers a snapshot of our investigations to date,” they say in a statement announcing the exhibition.

It traces the biographies of items from the Museum’s various collections, covering fields as varied as graphics and painting, fashion and textiles, artisan craftwork and furniture, musical instruments, and puppets. The sheer diversity of these collections is evidence indeed of the full extent of the Nazi plunder, which permeated every area of public and private life.”

The museum’s directors decided to move the focus away from work by famous artists, owned by wealthy people and prominent art dealers. “Such finds can cause us to overlook the less well-known but often deeply personal works of art and cultural objects that also fell victim to the Nazi policies of persecution and expropriation. The repression and state-sponsored confiscation of property practised by the Nazis also targeted Jewish artists who are all but forgotten today, as well as businesses, private individuals and political opponents of the regime. “No account of the Third Reich’s history of disenfranchisement and expropriation can be complete until equal weight is given to the fate of the ‘little people’ and to works of art and cultural objects deemed less important to art history.”

There are four businesses featured: Heinrich Rothschild Hats, puppets made by Maria Luisa Kohn, Siegfried Laemmler, an art dealer, and Bernheimer, which was a major department store selling art, antiques, rugs and more.

My visit to the museum last June was unforgettable. Now I’m looking forward to attending the exhibition’s launch and a special preview on April 26, together with relatives I’ve never met, including one cousin, born in the USA who now lives in Germany.

I am fairly confident my mother would approve but I do wonder what Heinrich and Otto would say, after the suffering they went through.

I also wonder what the citizens of Munich will make of this part of their history, brought to light after so many years.

The exhibition of formerly Jewish owned property at the City Museum, Munich runs from April 27 to September 23.