European museums face renewed calls to hand back artifacts looted in Africa during the colonial-era. 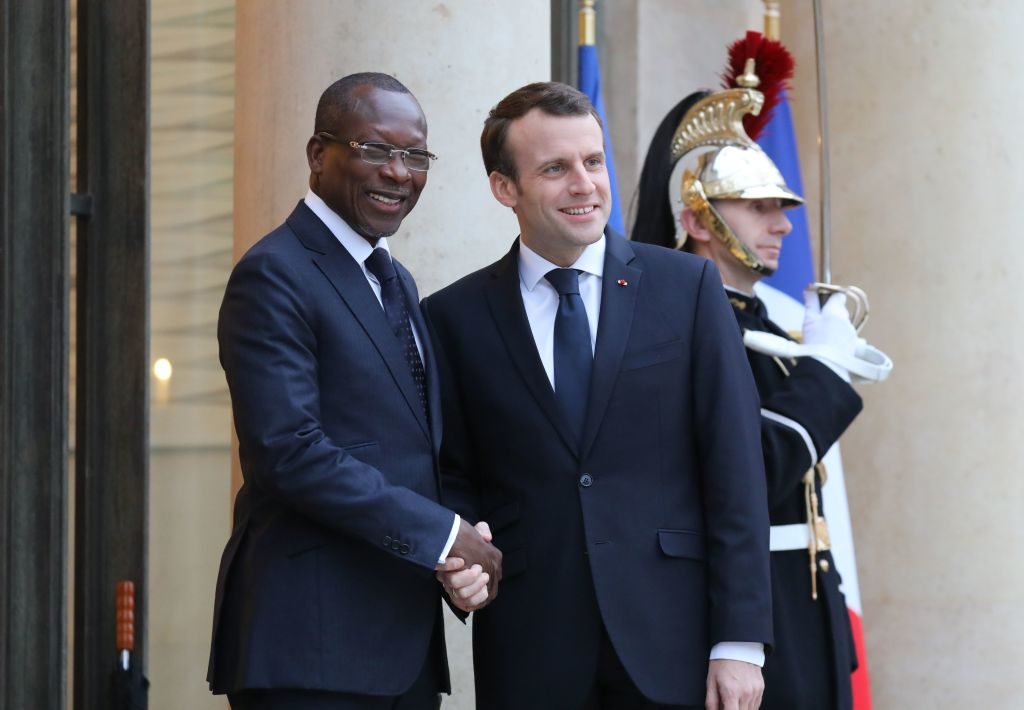 France's president Emmanuel Macron shakes hands with Benin's president Patrice Talon during his arrival to the Elysee Palace on March 5, 2018 in Paris.

Emmanuel Macron welcomed the President of Benin to the Elysée Palace in Paris this week, the first visit by an African head of state since the French President’s surprise pledge last November that he wanted to see Africa’s cultural treasures on show “in Dakar, Lagos and Cotonou,” not just in Paris.

The outcome of the French head of state’s meeting with Benin’s president, Patrice Talon, is being watched closely by European museums that also have art and artifacts looted from the West African nation in their collection—and those who have long wanted museums to repatriate historic plunder taken from across the continent.

Also this week, Macron announced the appointment of two experts who will report later in the year on the repatriation of African cultural heritage held in French museums. The Senegalese writer and economist Felwine Sarr, and the French art historian Bénédicte Savoy, are due to present their recommendations in November.

Macron’s historic statement, which came as a surprise to many in Europe and Africa, marked a huge shift in the stance held by the French government, which for many years closely guarded the “inalienable” right to its national collections. Its institutions own African art, some of which was looted by the French during the colonial period, just as Britain, Germany, Belgium and the Netherlands in territories they controlled in the 19th and early 20th centuries.

Benin suffered more than most. British troops plundered Benin City in 1897. Many of the looted artifacts, including the sculptures known at the Benin Bronzes, were acquired by the British Museum. Others were auctioned off to defray the the cost of the campaign and are now in museums across Europe as well as North America.

Although Macron’s speech was widely applauded, others were less impressed. The president declared he will “set the conditions” for repatriation, but what are those conditions? And does Macron have the right to decide whether African institutions are fit to take care of artifacts, if they are repatriated?

In December, Nigeria’s National Commission for Museums and Monuments called for France to unconditionally return all heritage taken illegally from Nigeria and other parts of Africa.

Sylvester Okwunodu Ogbechie, a professor of art history and architecture at the University of California, Santa Barbara, tells artnet News: “[It is] completely and arrogantly wrong to imagine that France should have the last word on what constitutes safe conditions for managing these artifacts.”

Ogbechie thinks that in addition to restituting African objects, Western countries should provide monetary reparations equalling the benefits derived from holding these objects for more than a hundred years. 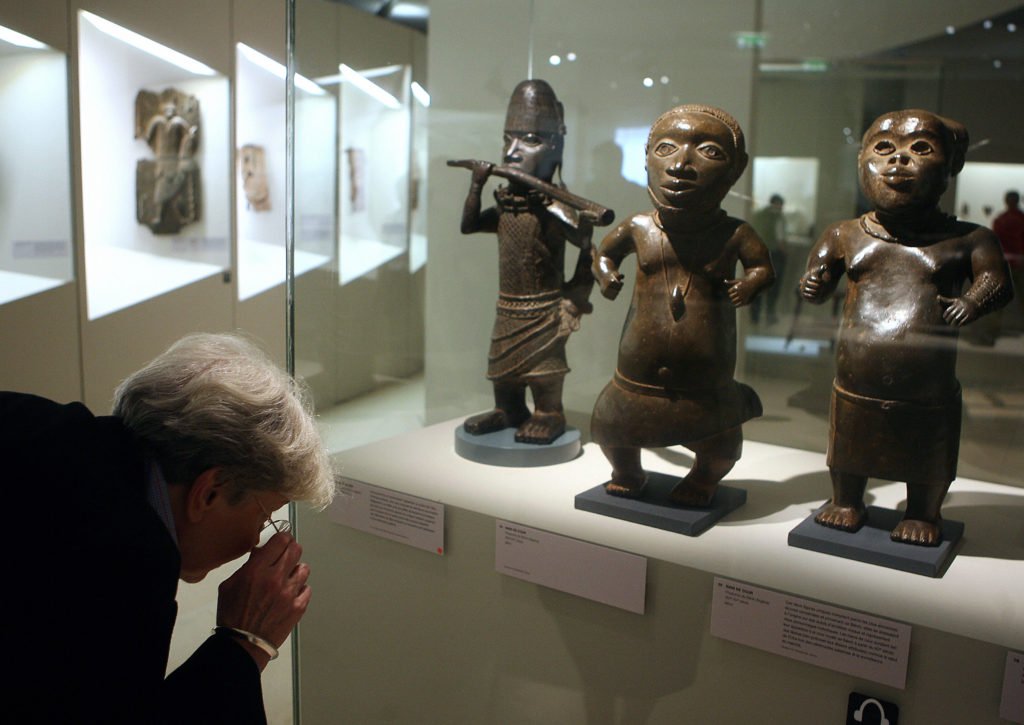 A visitor looks at a statue in brass representing a horn player (L, Benin, South of Nigeria, XVIth and XVIIth Century) during an exhibition focused on refined Art in Benin, 02 October 2007 at the Quai Branly museum in Paris.

The French Ministry of Culture has opposed repatriation in the past. So far, the culture minister Françoise Nyssen has not commented in public on Macron’s speech, nor has the director of the Louvre, Jean-Luc Martinez. In October he proudly announced at the opening of the Louvre Abu Dhabi a new acquisition: a magnificent head of the Oba (king) of Benin. (The Louvre Abu Dhabi did not respond to requests for information about its provenance).

The director of the Museé du Quai Branly – Jacques Chirac in Paris, which has a vast collection of African artifacts was opposed to returning anything to source countries, but after Macron’s speech in Africa, Stéphane Martin has had a change of heart.

When artnet News contacted the museum shortly after Macron’s speech on November 28, a spokesperson stated that the museum “fully supported the president’s initiative.” Martin has since come out in favor of returning African artifacts to Africa, justifying his U-turn position in an interview with The Art Newspaper: “There is a real problem which is specific to Africa. Cultural heritage has disappeared from the continent.” He regretted that in the museum’s African art exhibitions since the museum opened in 2006, not a single work was lent by an African museum. “We ought to do something to repair that,” Martin said.

Previously Martin argued that losing artfacts would disrupt the museum’s mission to educate French visitors about the “Other.” He told Sally Price in her 2007 book Paris Primitive, “We are not in the business of buying ourselves a clear conscience vis-a vis the non-Western world or becoming an ‘apology museum’.”

Instead of repatriation, Martin prefers that French and African museums collaborate and exchange loans. He has suggested that a collaborative project similar to the Louvre Abu Dhabi might work with a museum in Africa, if suitable museum partnerships could be arranged for medium or long-term loans. But here’s the rub: although Martin cites the Museum of African Civilisations in the Senegalese capital of Dakar as a possible partner, there are few other museums in Africa that would meet French museum standards.

Critics of this approach argue that French approval of African museums expresses a paternalistic attitude towards Africa that smacks of “neo-colonialism.” In the publication Modern Ghana Kwame Tua Opuku, condemned Westerners assuming “a God-given right and obligation to supervise Africans and their activities, including what obviously is African property.”

“The Benin bronzes were perfectly safeguarded in the King’s palace for over 500 years before the British looted the entire corpus they could lay their hands on,” Sylvester Okwunodu Ogbechie points out, although he acknowledges that African museums will need time to improve security and other standards of care. 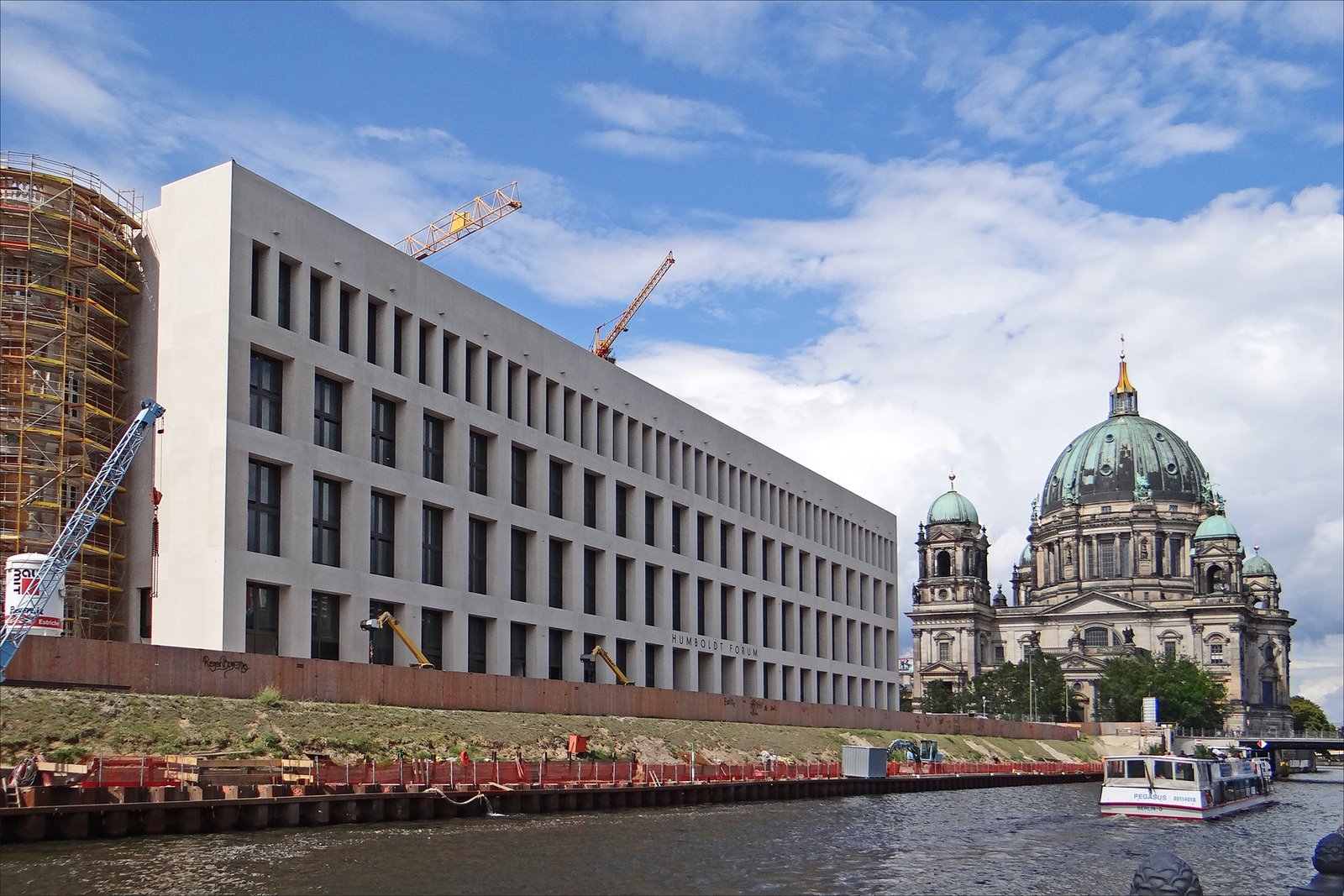 The Humboldt Forum under construction.

Museum directors of ethnographic collections across Europe are under closer scrutiny after  Macron’s pledge. The Benin Dialogue Group has been meeting to find their own solutions. Institutions taking part include the British Museum in London, Berlin’s Humboldt Forum and the Netherlands museum of ethnography in Leiden.

Nicholas Thomas, the director of Britain’s Museum of Archaeology and Anthropology and professor of art history at Cambridge University, is a member. He told artnet News that restitution should not be looked at as  “a retrospective fix” for colonial wrongs, but “a process that needs case-by-case consideration and development, based in sensitive assessment of public benefit locally, nationally and internationally, undertaken with due regard to the longer-term care, for future generations, of great works of art.”

Thomas added that Macron’s comments give positive encouragement and momentum to the work of European museum leaders and curators who have for some years sought to develop partnerships with communities and experts in the countries from which collections originated.

Meanwhile, the Victoria & Albert Museum (V&A) is collaborating with the Ethiopian embassy in London and an advisory group from the Ethiopian community in London on an exhibition, which is due to open on April 5, of Ethiopian treasure, including the gold crown, seized by a British military expedition in 1868 to punish the emperor of what was then Abyssinia. The V&A’s director Tristram Hunt has said that he has an “open mind” about long-term loans to Ethiopia, which has long asked for their return.

In Germany, the country with the largest concentration of museums holding cultural treasures and human bones from Africa, 40 organizations representing the country’s African diaspora responded to Macron by signing an open letter to Angela Merkel urging her to follow the “historic initiative” of the French president. The German culture minister Monika Grütters has since admitted a degree of colonial amnesia on the part of the country and pledged government funding for such research.

Berlin’s Humboldt Forum, which possesses around 75,000 African objects, has recently stirred public outrage because it is receiving even more African artifacts—some 508 Benin artifacts in the city’s ethnographic collections. Bénédicte Savoy, the art historian on Macron’s repatriation team, resigned from her position on the advisory board of the Humboldt forum last year, citing the neglect of provenance research.

Hermann Parzinger, the president of the Prussian Cultural Heritage Foundation for the past ten years, and a co-founding director of the Humboldt Forum with former British Museum director Neil MacGregor told The Art Newspaper that it had started researching the histories of African artifacts in the collection. “If you are conducting provenance research, then you also have to expect that you will come across objects that came into the collection illegally,” Parzinger said, adding, “and you have to be willing to hand them back.”

Although this has largely been received as a positive step in the right direction, a researcher at Berlin’s Center for Anthropological Research on Museums and Heritage, Margareta von Oswold, told artnet News that provenance research can be exploited to delay questions of repatriation and ownership. She pointed out that so far German museums are only discussing permanent loans, not repatriation. “I would argue that the control, symbolic and financial power that ownership implicates should be ultimately transferred,” she said, without disregarding the need for some objects to still be shown and researched in European museums as a reminder of “the (violent) histories of global entanglements that these collections materialize.”