‘These Benin works stand among the highest heights of European casting. Benvenuto Cellini could not have made a better cast himself, nor anyone before or after him,even to the present day. These bronzes reach the very heights of what is technically possible., 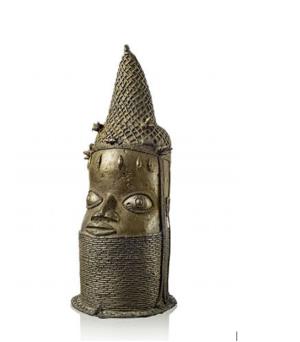 Head of an Oba, Benin Nigeria, part of Nazi-looted art, now to be auctioned.

According to information on the homepage of the auction house, Zemanek-Münster, Wurzburg, Germany, the above Oba head as well as a commemorative head and 9 other Benin bronze relief panels will be auctioned on 10 March 2018. (1)

Provenance research established that the Benin objects were part of the Rudolf Mosse art collection that the Nazis confiscated and compulsorily auctioned in 1934. After several changes in ownership, these Benin objects became part of the estate of Gerda Bassenge (1915-1995) who acquired them in 1966 and are still part of the Bassenge property.

Thermoluminescence analysis revealed that the Benin objects were 175 years old (+/- 20-35%). The auctioneer’s statement declares: ‘It is a work of art belonging to the high culture of Benin and whose artistic mastery was already recognised by Felix von Luschan (1854 -1924), scientists, Benin researchers and explorers, who did not hesitate to compare it with objects from the Italian Renaissance’.

The auctioneer further informs us that ‘R. Mosse was one of the first art collectors who, together with the art critic Fritz Stahl (1864-1928), at least on occasion used a consultant for his purchases. Felix von Luschan and Hans Meyer Mosse were well known to him. If Stahl was the consultant for paintings, he could have helped him buy African art objects. Luschan (1854-1924) was director of the Ethnological Museum in Berlin from 1905 to 1910. Hans Meyer (1858-1929) put together a significant collection of 53 Benin objects, which went to the Ethnological Museum in Leipzig between 1900 and 1919 and is now one of the largest treasures of the house.’

We are not told where Rudolf Mosse got his Benin artefacts from. The provenance research stops at Mosse’s possession and does not seem interested in the earlier lives of the objects.

It is by now well- known, and confirmed by Felix von Luschan, that there were no Benin artefacts in Europe before the invasion, looting, and destruction by British forces in 1897. (2) 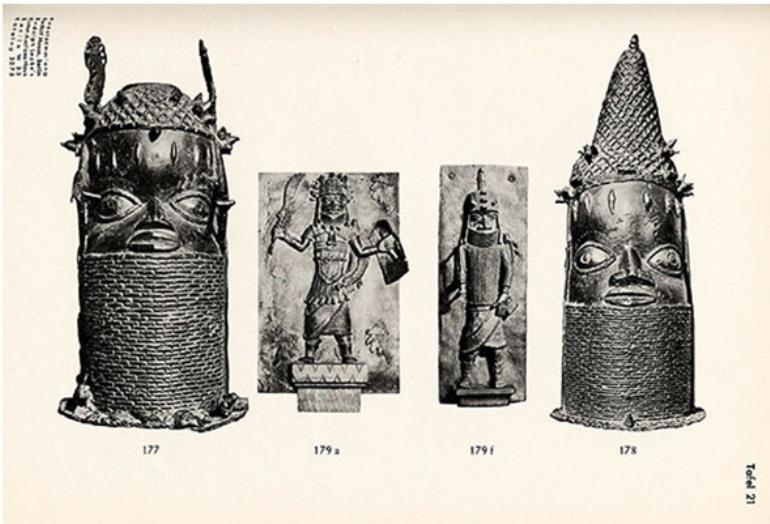 When Sotheby’s announced the intention to auction a queen-mother Idia sculpture in 2011 the public outcry against the sale of the looted artefact was such that they finally cancelled the proposed auction. (3)

What could the successors do? They could follow the example of Dr. Mark Walker, and after consultations and advice, return the looted artefacts to the Oba of Nigeria and his people. (4)

The question which one could ask is whether there are any other cases of ‘loot in loot’ in the various restitutions of Nazi loot in Europe. It could well be that with little respect for Africans in the Western world, many of the institutions that dealt with Nazi looted art and property did not pay much attention even if they recognized the presence of African art objects in the restitution of Nazi loot. However, given the number of cases of Nazi loot, it will be surprising if there were not a few cases of ‘loot in loot’ involving Benin or other precious African artefacts.

The auctioneer gives the provenance of the Benin artefacts as follows:Provenienz:

Was the decision to cancel the Benin mask based on moral principles,or merely a tactical withdrawal? ...

4. K. Opoku, Return Of Two Looted Benin Bronzes By A Briton: History In The Making