PASADENA, Calif. (CN) – The winding journey of two Nazi-plundered masterpieces given by the Dutch government to a collector who in turn sold them to a Southern California museum made a stop at the Ninth Circuit Wednesday, where the heir of the paintings’ Jewish owner fought to have them returned.

The Ninth Circuit courthouse where Wednesday morning’s oral arguments took place is less than a mile from the Norton Simon Museum of Art, where the life-size panels of Adam and Eve painted by Renaissance master Lucas Cranach the Elder have resided since the museum’s namesake – industrialist Norton Simon – purchased them from an American naval officer and former Russian prince in 1971. 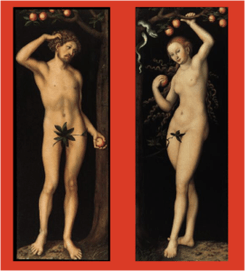 Marei von Saher, daughter-in-law of the Jewish art dealer, has made it her life’s work to get back paintings stolen from Jewish owners by the Nazis. The works at issue in this case were seized from her father-in-law by Nazi Reichsmarschall Hermann Göring.

Allied forces recovered artwork seized by Göring and gave hundreds of pieces to the Dutch government after the war. Von Saher’s mother-in-law Desi Goudstikker attempted to reclaim the artwork through the government’s restitution process from 1946 to 1952 and was unsuccessful because, von Saher claims, the restitution system was designed to funnel the stolen art into Dutch museums.

After spending eight years winding her way through the European courts, von Saher recovered over 200 Goudstikker masterpieces in the largest successful restitution claim of Nazi-looted artworks. The Dutch government attributed its change of heart to a shift “from a purely legal approach” to a “moral policy approach.

Von Saher sold the majority of the paintings for tens of millions of dollars. The Cranachs, however, remained in the Norton Simon.

She asked the museum to return the nearly 500-year-old paintings, appraised at $24 million several years ago. When the museum refused, she sued a federal complaint in the Central District of California where a federal judge held California’s law for recovery of stolen art conflicted with the U.S. government’s constitutional authority over foreign affairs.

Von Saher’s attorney Lawrence Kaye from Herrick Feinstein told the three-judge appellate panel a federal judge made a mistake by finding the Dutch government could assert ownership of artwork it received through external restitution.

“The district court’s (findings) contravene the Dutch government’s own determinations and findings, which comprised acts of state that cannot be questioned by the district court,” said Kaye.

Circuit Judge M. Margaret McKeown noted that argument asks for Dutch law to be applied, while other von Saher’s other arguments say it’s not a question of Dutch or U.S. law, but Dutch policy.

“What law applies in your view?” McKeown asked.

Kaye said claims of conversion and replevin are a function of California law.

“The pictures are here. California law provides you can’t get good title to stolen property even if you’re a good-faith purchaser,” said Kaye.

U.S. District Judge James Donato, sitting by designation from the Northern District of California, asked Kaye about a 1999 ruling by a Dutch appeals court holding it was too late for Von Saher to reclaim the artwork through a post-war restitution law.

Kaye said the paintings at issue here were not in the Netherlands and not part of the 1999 proceedings. While that decision barred Desi Goudstikker from pursuing restitution through a specific post-war procedure, it can’t applied to the Cranachs, he said.

McKeown asked, “But it’s basically affirming that time has passed, hasn’t it?”

Kaye said that decision was purely a procedural decision and the claim to the works was not waived.

The museum’s attorney Fred Rowley, with Munger Tolles, said the paintings were transferred to the American naval officer and were treated as Dutch property at the time. He noted the Dutch secretary for education, culture and science returned the paintings to the heirs in 2006 and restored their rights to the works – save the Cranachs.

“When the state secretary is handing back the 206 paintings that are still in Dutch hands it’s not even implementing the 2001 (restitutions committee) policy decision. It’s acting in its discretion because it’s Dutch property. That policy does not include works of art that have been transferred. Which is this very situation,” said Rowley.

Desi Goudstikker waived her right to recover the paintings through the restitution process mainly for financial reasons in the 1950s, according to court documents from the time.

Circuit Judge Kim McLane Wardlaw asked, “I’m wondering what you think what the Netherlands should have done. Were they under an obligation to hold onto the Cranachs into perpetuity just in case Desi changed her mind?”

Kaye answered the paintings should have been returned to their country of origin and restored to the original owner under the external restitution doctrine at the time.