Face to face with the Gurlitt hoard 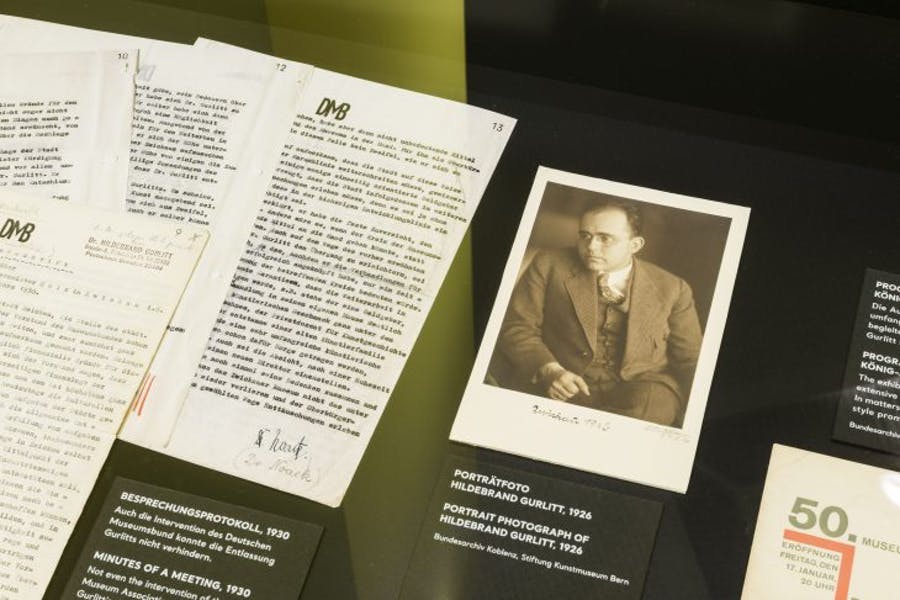 Installation view of 'Gurlitt: Status Report' at the Bundeskunsthalle, Bonn, 2017

When the German customs authorities began to investigate a quiet old man travelling on a train from Switzerland to Munich in 2010, little did they know what it would lead to. Cornelius Gurlitt probably didn’t seem very interesting at first. He was a recluse in his 80s. He had never had a job and had no family. He claimed never to have been in love. He hadn’t watched television since the early 1960s. All he had done, he would later tell reporters, was stay home with his pictures: hundreds of works of art by Matisse and Picasso, Cézanne and Renoir, which authorities discovered stuffed in drawers and behind cabinets in his Munich and Salzburg homes when they conducted raids in 2012.

The reaction of the press to this discovery, when it was announced a year later, was one of euphoria, curiosity, and disgust. ‘This retiree is hoarding 1,400 masterworks!’ exclaimed the German tabloid Bild. Yet the find immediately raised difficult questions. Why had Cornelius’s father, Hildebrand Gurlitt, an art dealer who worked for Hitler, selling works owned by Jewish families, never been punished for his activities? How had his son managed to profit from the sale of these works? And what to do with the paintings themselves – hadn’t Germany already dealt with art looted during the war? Evidently, the discovery troubled the government, which had hidden knowledge of Gurlitt’s hoard from the press, and from any potential owners who might have a claim on these artworks, for over a year. 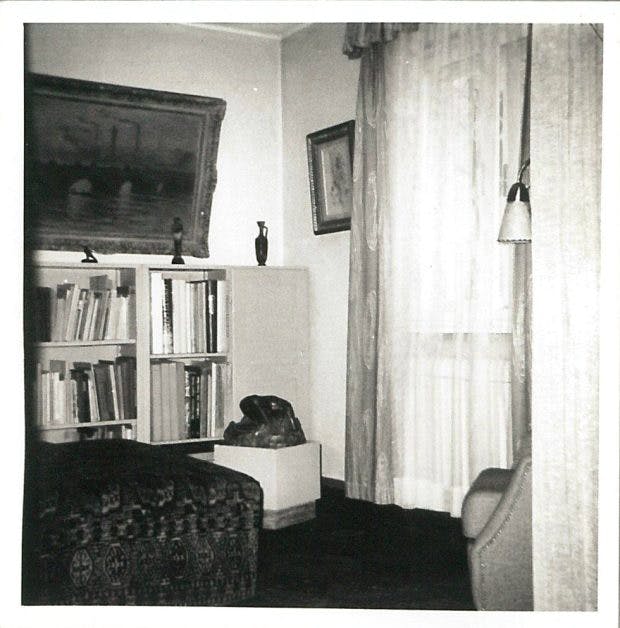 Historians estimate that more than 650,000 artworks were stolen in the Nazi era. Efforts to restitute works began before the Second World War was even over. In 1943, the American Monuments, Fine Arts and Archives programme, later known as the ‘Monuments Men’, undertook the task of meticulously cataloguing and understanding who had taken what, working with art historians to identify pieces of art and their origin. They opened vaults where Nazis had stored paintings and sifted through the masterpieces Hitler had planned to display at the Führermuseum, which had he hoped to open in his hometown of Linz in Austria.

The Monuments Men did not, however, return works to individual owners. This was to be a national duty. In 1947 the Americans passed a law in their zone of occupation in Germany to return all work belonging to ‘persons who were wrongfully deprived of [it]’. The principles established by the Allies, ‘some of which turned into laws, some of which guided judicial interpretation […] cast a long shadow into the future,’ writes the lawyer Nicholas O’Donnell in his book A Tragic Fate: Law and Ethics in the Battle Over Nazi-Looted Art (2017). But ‘actual private party disputes were relatively rare for the better part of fifty years’. The issue of restitution re-entered the public eye in the 1990s when new scholarship and new sources revealed the amount of work looted and how little had been given back. Representatives of 44 countries and 13 NGOs established a new set of principles at the Washington Conference of 1998 to further ease the return of Nazi-looted art around the world.

Germany was among the countries that adopted the Washington Conference principles and, in theory, the task of restitution should have been done long ago. After the public disclosure of Gurlitt’s hoard, the German government announced funds to study the provenance of these works and the creation of the German Lost Art Foundation. Most importantly of all, officials renewed their commitment to a task to which the country had committed and recommitted for 70 years.

Now we have ‘Gurlitt: Status Report’, the first exhibition of works in the Gurlitt hoard open to the public. The works are divided into two categories and on display at two venues. At the Kunstmuseum Bern (until 4 March), to which Cornelius Gurlitt left his art in his will, there is the ‘degenerate art’ Hildebrand Gurlitt sold on behalf of the German Reich after 1937: works by artists such as Kokoschka, Macke, and Beckmann, taken from museums and sold abroad to finance the Third Reich. Art whose provenance could not be determined was sent back to Germany to be studied. Another exhibition at the Bundeskunsthalle Bonn (until 11 March) focuses on this second category of works, as well as on the dealer himself and his association with the Nazi regime.

Much of the two exhibitions is devoted to discussing Hildebrand Gurlitt, who had been a progressive museum director – a champion of Expressionist artists – in first Zwickau, then Hamburg. Hildebrand was partly Jewish; after 1935 the gallery he had set up to deal in modern art was in his wife’s name. The wall texts and accompanying catalogue are filled with attempts to understand his behaviour, but some of explanations come across as wilfully oblivious. ‘Apart from all the contradictions with the Nazi hierarchy and ideology,’ states one catalogue essay discussing Hildebrand’s political beliefs, ‘the idea of Volksgemeinschaft promised the working classes the opportunity to climb the social ladder and to bring an equal society within reach.’ Gurlitt’s daughter Renate didn’t see any contradictions in her father’s reasoning when she wrote to her brother Cornelius in the 1960s: ‘Do you ever enjoy what you have of [our father’s collection] in Salzburg? For us, I sometimes think, his most personal and most valuable legacy has turned into the darkest burden.’ After the war Hildebrand lied about his activities to the denazification tribunal in Bamberg, presenting himself as an unwilling employee of the Nazi regime. 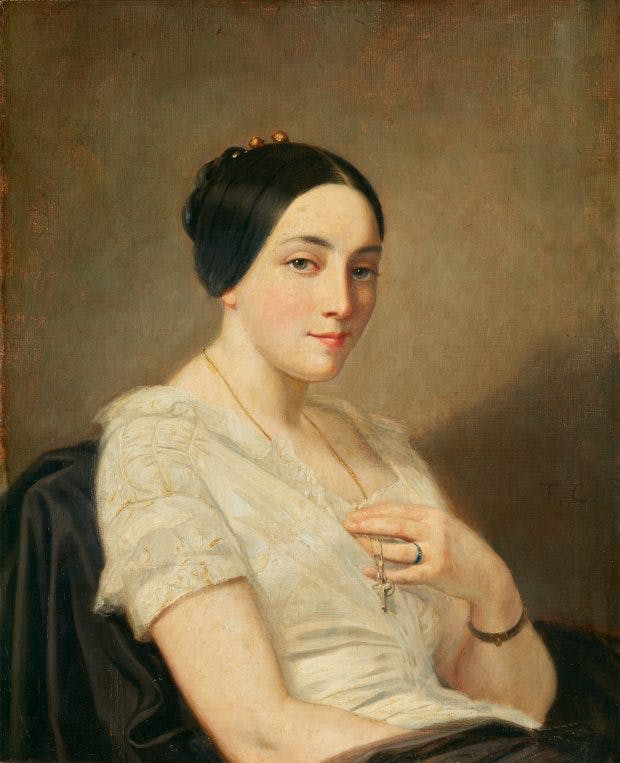 Just before the Bonn and Bern exhibitions opened, the German Lost Art Foundation announced that it had identified a painting by Thomas Couture belonging to the French resistance leader Georges Mandel. Researchers had noticed a small hole in the canvas; the hole was mentioned in a catalogue of art stolen from the politician, which the committee had studied. The exhibitions are so tightly focused on Hildebrand’s activities and guilt that the wider issues surrounding post-war restitution seem to recede into the background. Yet in other areas of restitution law there are signs of what O’Donnell calls ‘guilt fatigue’. In 2016, an investigation by the Commission for Looted Art in Europe found that art meant to be returned to Jewish families in Bavaria had instead been sold to the descendants of SS officers after the war, including Hermann Goering’s family. Just last year, a Frankfurt court threw out a case brought by the descendants of the art collector Robert Graetz, who were claiming ownership of a painting by Max Pechstein, now in the possession of a German family. The old provisions of the German civil code, which were applied in the Graetz case, place a 30-year statute of limitations on property claims, including restitution disputes. And although the Washington Conference principles sought to ease the return of works in public collections, those within private collections remain protected by law.

Switzerland’s role in the Gurlitt story remains ambiguous. Cornelius Gurlitt was travelling to Bern when he was caught. ‘He travelled to Zurich every four to six weeks and fetched his €9,000 to pay his living costs,’ Eberhard Kornfeld, one of the dealers and auction house employees who sold art on behalf of Cornelius Gurlitt, told a Swiss television station in October. Some speculate that Switzerland’s perceived neutrality is what prompted Gurlitt to bequeath his works to the Kunstmuseum Bern; he was angry that his collection had been such a scandal in Germany.

Towards the end of the press conference at the opening of the exhibition in Bonn, a question-and-answer session was interrupted by Ekkehart Gurlitt, a cousin of Cornelius who lives in Barcelona. He stood up and asked why his family name should be linked to the Nazis if, at the end of all this research, only six of the paintings had been found to have had Jewish owners, and wondered why tax payers should pay for this whole thing, anyway. The panellists, including Andrea Baresel-Brand, director of the Gurlitt Provenance Research Project, and Rein Wolfs, head of the Bundeskunsthalle Bonn, stiffened and rejected his argument. But the government does seem to agree with some part of the argument. As I write, funding for the task force is in place only until the end of 2017; by the time this article appears it will be wound down, although the provenance of many works hasn’t been fully established. 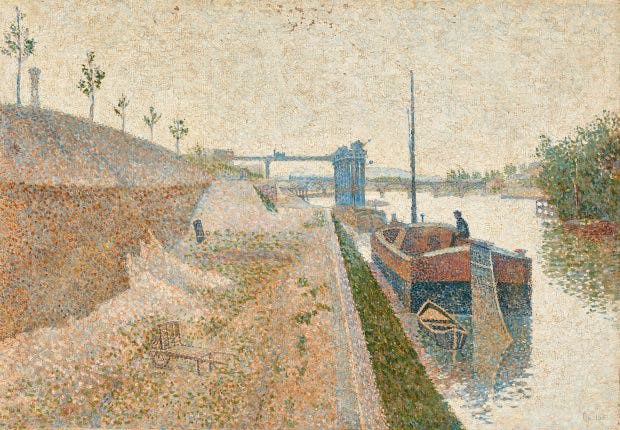 Christopher Marinello of Art Recovery International is arguably the most high-profile of a cadre of lawyers who specialise in restitution of Nazi-looted works. Among other cases, Marinello arranged the return of Matisse’s Seated Woman from the Gurlitt trove to the heirs of its owner. Is it valid, I ask him, to say that after 75 years we should accept the limited successes of restitution efforts and set the failures aside? Sure: ‘If restitution was handled in a proper fashion and taken seriously all these years,’ Marinello says. But the cut-off point ‘should start from a period in time when we say we’ve done everything we can do, our archives have been opened, we’ve thoroughly researched collections, dealers are properly doing due diligence, collectors are doing due diligence, people coming forward. None of this is happening.’ In Marinello’s opinion, private collectors with stolen art have simply been waiting for the original owners and their immediate heirs to die. When we talked in November, he had just been in Berlin, meeting the minister of culture.

Changing the law to extend restitution efforts to private collections would have farreaching consequences. What would happen if the work is currently in the hands of owners who bought it after the war, as was the case recently with a Pissarro painting in Paris? Are they at fault, or is it the person who sold it to them? Marinello argues that it is up to the sellers to ensure that they are not trading in stolen goods. ‘Sometimes when [auction houses] get extremely bad press and start losing business, that seems to get their attention.’ Many of these cases have already continued for decades. Without a statute of limitations, one could easily imagine them going on for many more generations. Given the examples of theft that continue to be uncovered, though, it seem rights to allow families to keep pursuing cases at present. 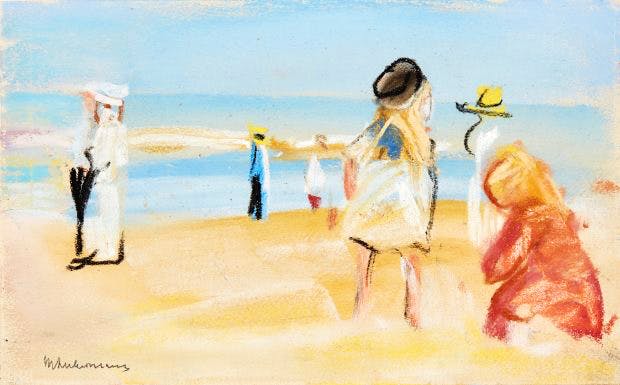 And what if a little complexity is a good thing – not for the owners of these works, but for the art itself? It struck me, walking through the two exhibitions, how little discussions of provenance seem to include the qualities of the actual works in question. There is an obvious change in the art Hildebrand Gurlitt bought and sold before he worked for the Nazis and after. The works in the degenerate art collection in Bern are particularly vivid. In Lady in a Car (1913), a watercolour by Macke, a young woman is seated in a carriage, head down, disappointed perhaps, or lost in thought. In The Alley (1985) by Edvard Munch, a naked woman makes her way through two lines of menacing men in top hats. However, as soon as Gurlitt started buying art for the Führermuseum as one of the four official art dealers for the Nazi regime, the bright colours and stark lines were replaced with the kind of academic painting of which the regime approved.

In Bern, one drawing in particular caught my eye. Old Woman with Cloche Hat (1920), a satirical drypoint by Max Beckmann, depicts a woman dressed in typical Biedermeier style. She looks in alarm at something to the left of the picture: a person perhaps, or the future direction of Germany. Seventeen years after it was made, this gentle caricature would be deemed too threatening to be seen, confiscated as ‘degenerate’ and taken by Hildebrand Gurlitt for possible sale abroad. Art can make its viewer question power rather than worship it. If provenance research, with its tangled questions of ownership and responsibility, power and memory, contributes to that discussion, why not welcome it?