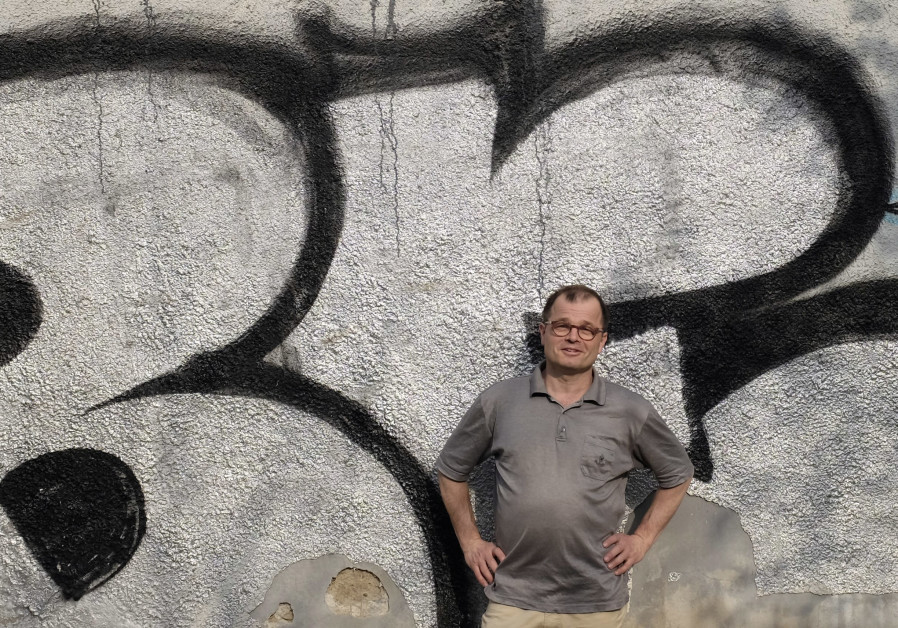 Stephan Templ poses for a photograph in Prague April 4, 2014

If Stephan Templ’s trial and imprisonment in Austria were meant to silence his criticism of the country’s Holocaust restitution system, then his prosecution was clearly a failure.

Templ is an Austrian-Jewish historian of the Holocaust who has written critically about his country since 1995.

In 2015, he was sent to jail for nearly a year on controversial fraud charges tied to his family’s own claim for compensation — and spent his time in prison diving even deeper into his area of expertise.

The result is a new book that for the first time chronicles how modern-day Austria gave its seal of approval for flawed restitution practices that were overseen by former Nazis. Those practices, Templ shows, in essence validated Nazi-era policies that were used to rob Austrian Jews of what little compensation they sought to receive for vast assets that they had been forced to sell to Aryans.

“The wrongly imprisoned experience a special kind of frustration: Your thoughts get into a cycle about where you are and who put you there,” Templ, 57, told JTA. His sentence was decried as a miscarriage of justice by dozens of leading Holocaust historians.

Templ was convicted of fraud for not listing an aunt on his survivor mother’s restitution claim, which he filled out for her. Neither Templ nor his mother wrote that they were the only claimants to the property. Austria has no law requiring restitution applicants to list other relatives. In previous official correspondence about the claim, Templ did list his aunt, which he argues means he had indeed informed the Republic of Austria of her existence.

The 75 historians, including Americans Deborah Lipstadt and Michael Berenbaum, suggested in a joint statement that Templ’s prosecution looked like a vendetta by the Austrian judiciary, which the Freedom Barometer index of 2016 ranked as the least independent in Western Europe.

The Anti-Defamation League also protested Templ’s sentence, as did the human rights lawyer Robert Amsterdam and Stuart Eizenstat, a former U.S. deputy secretary of the Treasury who helped set up Austria’s restitution system.

Efraim Zuroff, Eastern Europe director for the Simon Wiesenthal Center, told JTA about the case: “It looks like revenge, like they wanted to get back at him for his criticism. I’m not a jurist but it looks like an injustice.” Templ currently is facing a civil libel suit by Claire Fritsch, a legal adviser to the restitution authority who served as the main witness in his criminal court case. She claims she was libeled by his defense team’s attempts to undermine her testimony.

In Templ’s English-language book — which is titled “Austria’s Living Ghost” and is scheduled for publication online ahead of International Holocaust Remembrance Day on Jan. 27 — he examines the work of Austria’s Arbitration Panel for in Rem Restitution, a body set up in 2002 to review the restitution work done immediately after World War II on properties that in 2001 were in the state’s possession.

Until the 1990s, Austria had claimed that it was principally a victim, not a perpetrator, of Nazism. No one has been convicted of Nazi war crimes in Austria in more than 35 years, according to the Simon Wiesenthal Center. And whereas people with a Nazi past were removed from positions of influence in neighboring Germany, in Austria they were allowed to serve as judges, teachers and even restitution officials. (Walther Kastner, for example, was a former Nazi official who was entrusted with advising on restitution issues in the 1940s.) Austria even had a former Nazi, Kurt Waldheim, as president until 1992 — the year that Austrian officials began to drop the victim attitude, which is now described as a “myth” on official Austrian government websites.

But that myth has had far-reaching implications for Austria, said Templ, who in 2001 led groups around Vienna on tours of stolen Jewish property. He pointed out building after building, using a loudspeaker to name the families whose ancestors bought the assets for a fraction of their true worth from Jews fleeing for their lives.

“The lack of de-Nazification is the reason Austria now has in government, for the second time already, a party that was founded by an SS officer,” he said of the far-right Freedom Party, which joined the coalition last month.

Austria’s victim myth also tainted how the Austrian state handled the return of Jews from concentration camps, prosecuted Nazi war criminals and settled restitution issues. Concerns about this process led to a 2002 review by the Arbitration Panel, as part of a restitution treaty that Austria signed with the United States in 2001.

Thanks to the treaty, Austria has paid at least $670 million in compensation. But even that may have been the tip of the iceberg in a country that had at least 200,000 Jews before the Holocaust, many of them wealthy.

Templ’s research shows that out of nearly 2,000 restitution cases handled in the 1940s and 1950s, the Arbitration Panel reopened and declared unjust a total of only nine cases. It intervened in another 18 cases that had not been the subject of a claim, he said.

“This seemed to me like an astonishingly low number, considering the prevalence of injustice that went on in 1940s and 1950s restitution,” Templ said.

Take, for instance, the case of Anna Freud, the daughter of the famed Viennese psychoanalyst. Following her claim for restitution for a handsome estate that the Nazis stole from her family in 1938, she received in the 1950s a sum equivalent to $80, Templ’s research shows. However, that property was not reviewed in 2002, because the estate was privately owned and therefore not in the purview of the Arbitration Panel on state-held properties.

“So in prison, I set out to review for myself the claims that the Arbitration Panel had reviewed before me,” Templ, a bespectacled intellectual with a wry sense of humor and a passion for carpentry, said during a rare visit to Vienna (following his release from prison in 2015, Templ is spending most of his time in his Prague home, in what he terms self-exile).

The findings, he said, surprised even him.

One case deemed fair by the Arbitration Panel involved an apartment building in Vienna’s Alserbach Street owned by the Stianssy family. The Aryan buyers paid only 38 percent of its real worth in 1939. Of that sum, the Nazi state stole 80 percent through racist “emigration taxes” devised to defund Jewish sellers. The other 20 percent went to a frozen account and from there to the coffers of the Third Reich, his research shows. In 1951, Austrian restitution officials declined to return the “emigration taxes” to the Stianssy family, essentially validating their extraction.

Yet the Arbitration Panel in its 2014 review stated that it “cannot conclude that the settlement reached in 1951 represents an extreme injustice.” In so doing, Templ writes, “the Panel confirms the injustice.”

Leopold Stiassny died in Prague on Nov. 20, 1939. His wife, Martha Stiassny, was murdered in Auschwitz. Three of their close relatives were murdered by 1945.

Among the dozens of reviews flagged by Templ is a 2012 case concerning the sale of a forest 45 miles southwest of Vienna by the Hartenstein family. It too was not found to be “an extreme injustice,” even thought the family by 1957 received less than half of the land’s value, according to the panel. Templ’s research suggests they only got 10 percent of the property’s real value.

“I expect that now that I’ve been jailed, my criticism of Austria will be seen as a vendetta,” Templ said. “And I guess I have an agenda — but the numbers and the facts do not, and they tell a story that is much bigger and more important than my own.”

Queried by JTA on these cases, Josef Aicher, chairman of the Arbitration Panel for In Rem Restitution, stood by his organization’s findings.

“To assess ‘extreme injustice’ the Arbitration Panel has developed a complex case law,” he wrote, based on “restrictions on freedom of contract and discrepancy in value: The more the two criteria are pronounced, the more likely it is that an extreme injustice exists.”

He added that the Arbitration Panel has so far issued 138 recommendations for restitution with an estimated total value of $59 million. According to Templ, all these recommendations pertain to only 28 assets.

Citing independent appraisals, Aicher said that “virtually all real estate that had been confiscated by the state was restituted in its entirety after the war” as well as 60 percent of the properties sold under duress.

Crunching these numbers allowed Templ to find purpose and calm his nerves in prison, he said. But it wasn’t easy.

On a rare afternoon off from prison — Templ served time in a medium-security facility that allowed some inmates brief day passes — he “suddenly became very aggressive” toward a friend who came to visit him.

“When you see that life goes on while you’re stuck there, it releases some anger in you,” he said.

On one of his first days in prison, a longtime prisoner showed him around the place, he recalled. “When we reached the showers, he told me: These showers aren’t for you because they have water coming out” – a remark Templ believes was an anti-Semitic reference to Nazi gas chambers. Another prisoner harassed him with reference to Israel, he said.

But the troubles stopped when Muslim Chechen inmates, who are known for their ruthlessness and mob connections, discovered he could speak Russian and could therefore help them with German-language correspondence, he said. “As soon as the other inmates saw me hanging out with the Chechens, suddenly the behavior toward me changed.”

Asked whether he considers himself a victim, Templ said: “Judge for yourself. Victim is a word with considerable resonance in modern-day Austria. And a little bit of irony, too.”