Rare 1546 book looted by Nazis returned to family in Israel

The book was returned to the family as part of a German initiative to return Nazi looted heirlooms to their rightful owners. 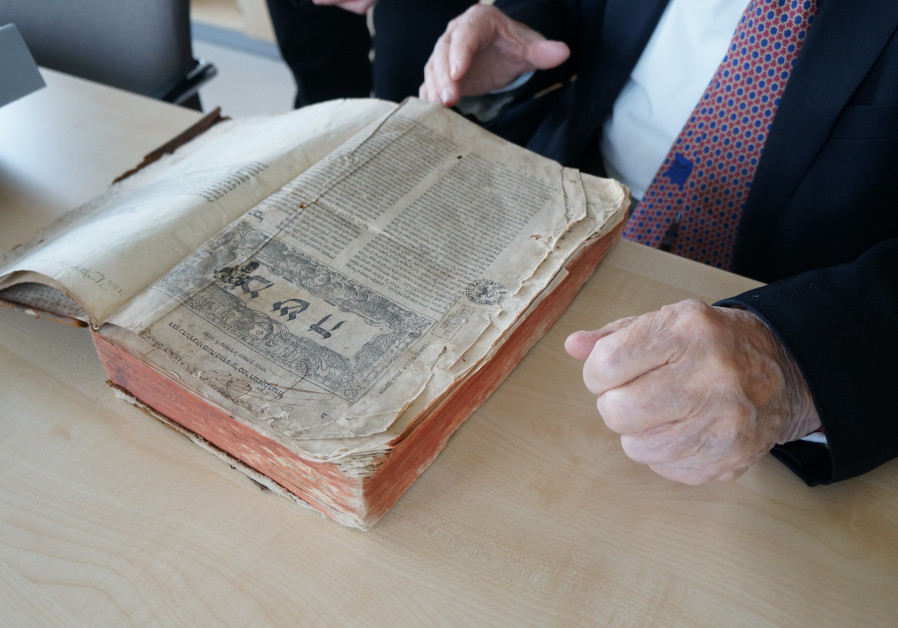 A book printed in 1546 that was looted in Poland by the Nazis during World War II was recently found in the University of Potsdam Library and returned to its rightful owners in Israel.

The book, Sefer Mitzvot Gadol, written by Rabbi Moses of Coucy and printed in Venice by Daniel Bomberri, explains the fundamentals of the 613 commandments of the Torah.

The book was returned to the family as part of a German initiative to return Nazi looted heirlooms to their rightful owners.|

Berl Schor and his son David, an attorney, flew to Berlin to accept the book from the University of Potsdam on Monday and reunite it with the family’s extensive collection in Israel.

David Schor, a keen family historian, told The Jerusalem Post that he had identified the book online by coincidence.

“I often search online because many new documents and information are becoming more readily available,” he said. “I typed in the name of my father’s maternal great, great, great grandparents just for the sheer fun and all of a sudden the photograph of the book appeared on my screen.”

Schor said he was “surprised” to see that one of the books in the Potsdam library had the same stamps and signatures as many books in his family’s library.

The Schor-Frankel family collection of Hebrew books dates back to the very beginning of the history of print. These books were acquired “not to decorate the book shelves,” but were intensely studied and passed on from generation to generation, Schor said.

After the death of Berl Schor’s grandparents, Berl Frankel and his wife, Sara, the Frankel Library joined the library of their son-in-law, Majer Schor (Berl Schor’s father), from Krakow.

Majer Schor and his wife, Mila, (Marjem Mirla) were Turkish citizens and as such were immune from Nazi persecution and decrees, even though they were Jewish.

Schor said his grandparents decided to remain in Krakow to help other Jews by engaging in anti-Nazi activities, such as transferring money, supplying false documentation and smuggling people out of Nazi-occupied Poland. The Schor family’s house also served as a “safe house’’ for anyone who needed shelter or a bed for a night.

When the couples’ Turkish passports were set to expire, they applied for their renewal.

However, the Turkish consul general in Berlin, H. Basri Danismend, sent a letter on October 15, 1942 to the Gestapo in Krakow, informing them that he is “honored” to advise that the Turkish citizenship of the Schor Family had been canceled. No such notice was sent to the Schor family.

“By sheer luck,” Schor explained, the letter was seen on the Gestapo chief’s desk by a police officer of the “Blue Police,” a Polish police force subordinate to the Nazis, who knew Majer Schor.

The officer warned Majer, and the Schor family was able to escape and go into hiding.

According to Schor, the original letter was found 70 years later in the Polish National Archives in Krakow.

Upon going underground, Majer Schor arranged with a friend of his, Prof. Tadeusz Kowalski, an Orientalist at the Jagiellonian University in Krakow, to store the Schor-Frankel Family Library for safekeeping in the cellars of the university.

Majer and Mila Schor were able to elude the Nazis for seven months, but were eventually identified and arrested as they attempted to escape by car. They were sent to the Plaszow concentration camp on the outskirts of Krakow and were murdered by the notorious commandant of the camp, Amon Goth, on July 8, 1943.

“Though my grandparents did not survive that war, quite a few thousand volumes did survive,” Schor said.

After the war, the library was returned to the family who fled from Poland, via Russia and Japan to New Zealand. The collection was later transferred to Israel after Berl Schor made aliya, and it has been in his possession ever since.

“Our family lost not only a lot of lives in the Holocaust, but also a lot of wealth and art, as well as books,” Schor said, adding that many family possessions were still missing.

In 1998/1999, the Washington Conference Principles on Nazi-Confiscated Art and Germany’s federal, state and municipal declaration on the tracing and return of Nazi-confiscated cultural assets, especially from Jewish holdings, provided the foundation for provenance research.

These declarations called upon public libraries, museums and archives to identify any of their holdings that might be Nazi loot, to identify any possible heirs, and to return the affected volumes.

To date, however, Schor explained that only six such institutions, including the University of Potsdam Library undertook actions to assess whether any of their holdings are Nazi loot.

The research is funded by the German Lost Art Foundation. At the Potsdam library, it is led by Andreas Kennecke, subject librarian responsible for Jewish studies and Jewish theology, and project associate Anke Geißler-Grünberg.

“The University of Potsdam Library became the first German institute to identify and return a looted book in accordance with this project,” said Schor.

Three additional German libraries: the Stiftung Neue Synagoge Berlin – Centrum Judaicum Library, the Freie Universität Berlin University Library and the Berlin Central and Regional Library, together with the University of Potsdam Library have published a list of 12,000 books that may have been looted by the Nazis and that are in their possession.

“This should be brought to the attention of the public at large to see if they can find any books belonging to them,” said Schor.

Schor said his family wished to thank the Potsdam library for having published the list in which the book was found and the “correct and elegant manner” in which it was returned.

Potsdam University asked for permission, which the Schor family “gladly gave,” to digitalize the book so that it will be available for future reference and research.

“The university was so excited to see us and return the book to us and now it will join the collection in Israel where it should belong,” Schor said.

The list of books can be found at http://lootedculturalassets.de