Is This Drawing in the Gurlitt Hoard an Unknown Early Work by Henry Moore?

An expert from the Henry Moore Foundation will help authenticate a sheet of reclining figures that was possibly purged from a German museum by the Nazis as "degenerate" art. 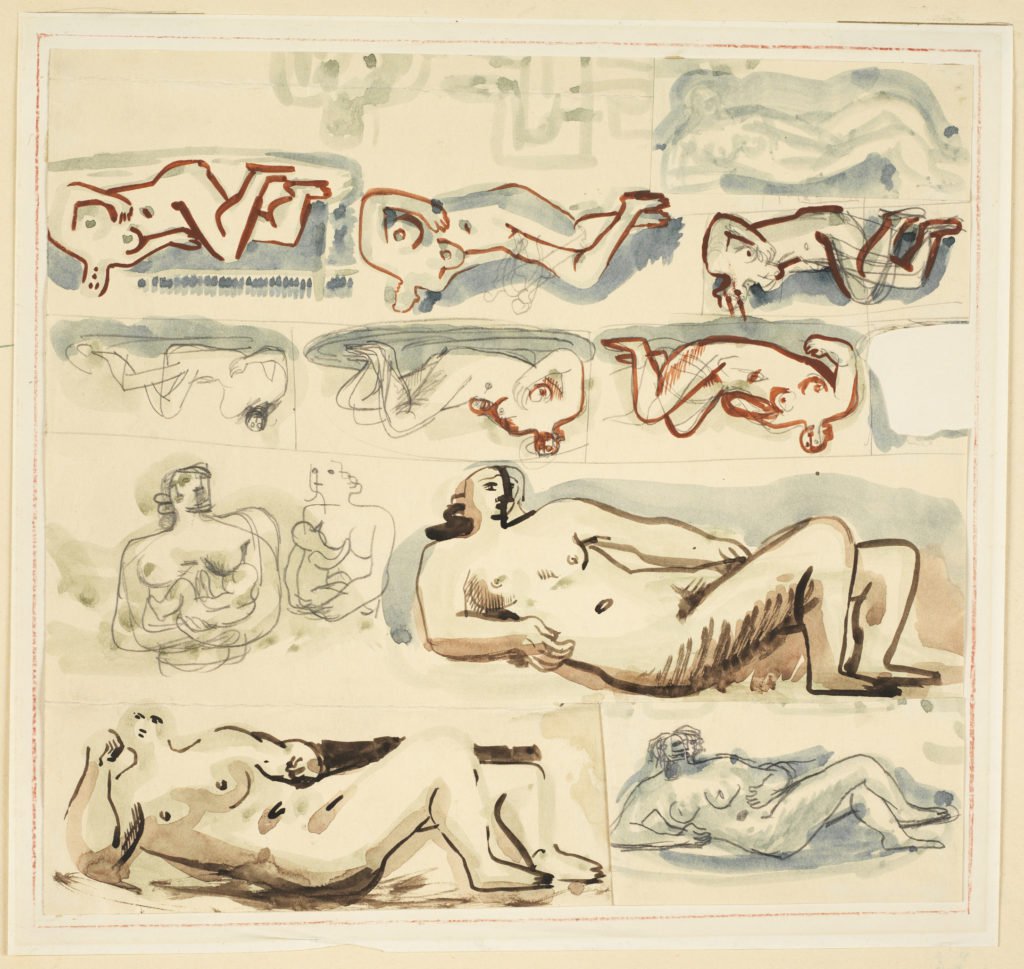 A sheet of drawings of reclining female nudes found in the Gurlitt hoard could be a previously unknown early work by Henry Moore that survived World War II, artnet News has learned. The undated work on paper, which is described as sketches for a stone sculpture and attributed to the British artist, is being authenticated with the help of experts from the UK-based Henry Moore Foundation. If genuine, the drawing would be the only work so far attributed to a Modern British artist in the 1,500-strong collection amassed by the Nazi-era art dealer Hildebrand Gurlitt (1895–1956).

The hoard was discovered in 2012 in the Munich and Salzburg apartments of Gurlitt’s reclusive son, Cornelius, as part of a raid by the tax authorities. In 2014, Cornelius bequeathed the collection to the Kunstmuseum Bern. (Gurlitt senior claimed his stock had largely been destroyed in the 1945 bombing of Dresden.)

But how did the early Moore end up in Gurlitt’s trove? Sebastiano Barassi, the head of collections and exhibitions at the Henry Moore Foundation at Perry Green in the south of England, says that one theory is that the drawing came from Hamburg’s Museum für Kunst und Gewerbe. The director of the museum of fine and applied art at the time, Max Sauerlandt, championed Modern art and is known to have acquired a sculpture by Moore around 1930, the artist’s first significant institutional purchase.

Moore’s catalogue raisonné shows a photograph of the sculpture, a small stone head, on Sauerlandt’s desk taken around that time, but its whereabouts is unknown and it is believed to have been confiscated as “degenerate” and destroyed by the Nazis around 1937.

Sauerlandt, who died of cancer aged 54 in 1934, built a large collection of Modernist works for the Hamburg museum. The drawing in the Gurlitt collection might be a work that Sauerlandt also bought but was never catalogued, says Barassi. (It does not appear the artist’s catalogue raisonné of drawings or in Germany’s Lost Art Registry, which lists three sculptures by the British artist, all from the collection of John Anthony Thwaites.) It is possible that Gurlitt obtained the drawing after it had also been purged from the Hamburg museum by the Nazis.

Barassi, who has just organized the exhibition “Becoming Henry Moore”—about the artist’s career up to 1930—plans to go to Bern where the work is now located. The foundation’s authentication board aims to make a decision by the summer. If the attribution proves accurate, Brassi hopes to be able to include the work in an exhibition of the artist’s drawings that is slated for 2019 at the Henry Moore Foundation.

The Kunstmuseum Bern, to which Cornelius Gurlitt chose to bequeath his father’s long-hidden collection, alerted the Henry Moore Foundation about the drawing, which Nina Zimmer, the museum’s director, says “is untypical because it is Modern British art.” Most of the works Hildebrand Gurlitt amassed were by German or French artists. However, the intensive, in-depth research needed to confirm the work’s authenticity and provenance is very typical of the Gurlitt works, she says. “It is not a masterpiece drawing,” she says, which rather increases the chances that it is genuine.

This month, the Swiss museum took over responsibility as the German-based Guritt research work winds down, after the latter’s funding ended on December 31, 2017. Bern is now hiring an additional member to serve on what will be a four-strong provenance research team, led by Nikola Dӧll. “We do not have as much money, or as many people [as the German task force],” Zimmer says, but confirms that provenance research will be a long-term project for the Swiss institution. (The German team will publish its complete report this month on the German Lost Art Foundation website.)

This spring, the Kunstmuseum Bern is due to show the second of the two-part exhibition “Gurlitt: Status Report,” which opened at the Bundeskunsthalle in Bonn, Germany last November. Subtitled “Nazi Art Theft and its Consequences,” it will include works of art that were purged by Hitler from German museums in the 1930s and then acquired by the dealer.

Kunstmuseum Bern, “Gurlitt: Status Report. Nazi Art Theft and its Consequences” will be on view from April 12 – July 15, 2018