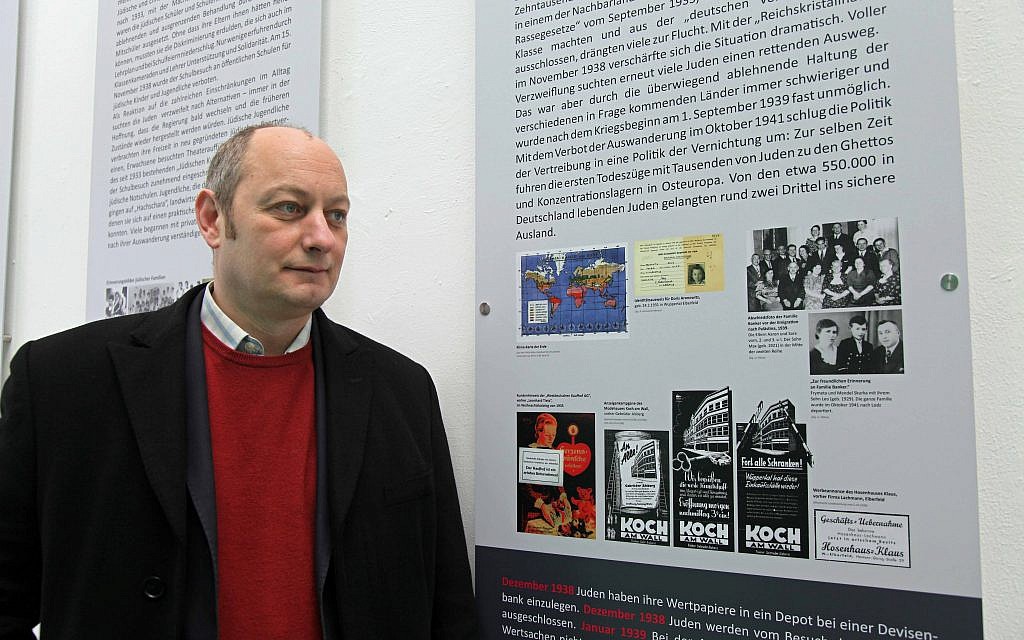 LONDON — Decades after an Impressionist masterpiece by Camille Pissarro was looted from the troves of a Jewish art collector by the Vichy government, a Paris court ruled that an American couple must return the painting to the man’s descendants.

Sotheby’s, who initially sold the painting “La Cueillette des Pois,” or “Picking Peas,” said that “At the time the painting was sold through Sotheby’s in London in 1966, the art world was not as sensitized to the issues of art displaced in World War II as it is today and there were few, if any, resources available to researchers in the field.”

It took another 30 years until the world was “sensitized” to effectively reuniting Jewish collections with its owners.

A year before the 1998 Washington Principles — which called upon governments and museums to ensure a just and fair solution to looted art — Sotheby’s became the first international auction house to establish a restitution department dedicated to researching the provenance of works that may have been confiscated or had gone missing between 1933 and 1945.

Despite the many decades that have elapsed since the Holocaust, thanks to the advent of the internet and huge search engines and databases, returning art to its rightful owners has become more achievable now than ever before.

Today the European division of restitution at Sotheby’s is run by Richard Aronowitz, from its London office. 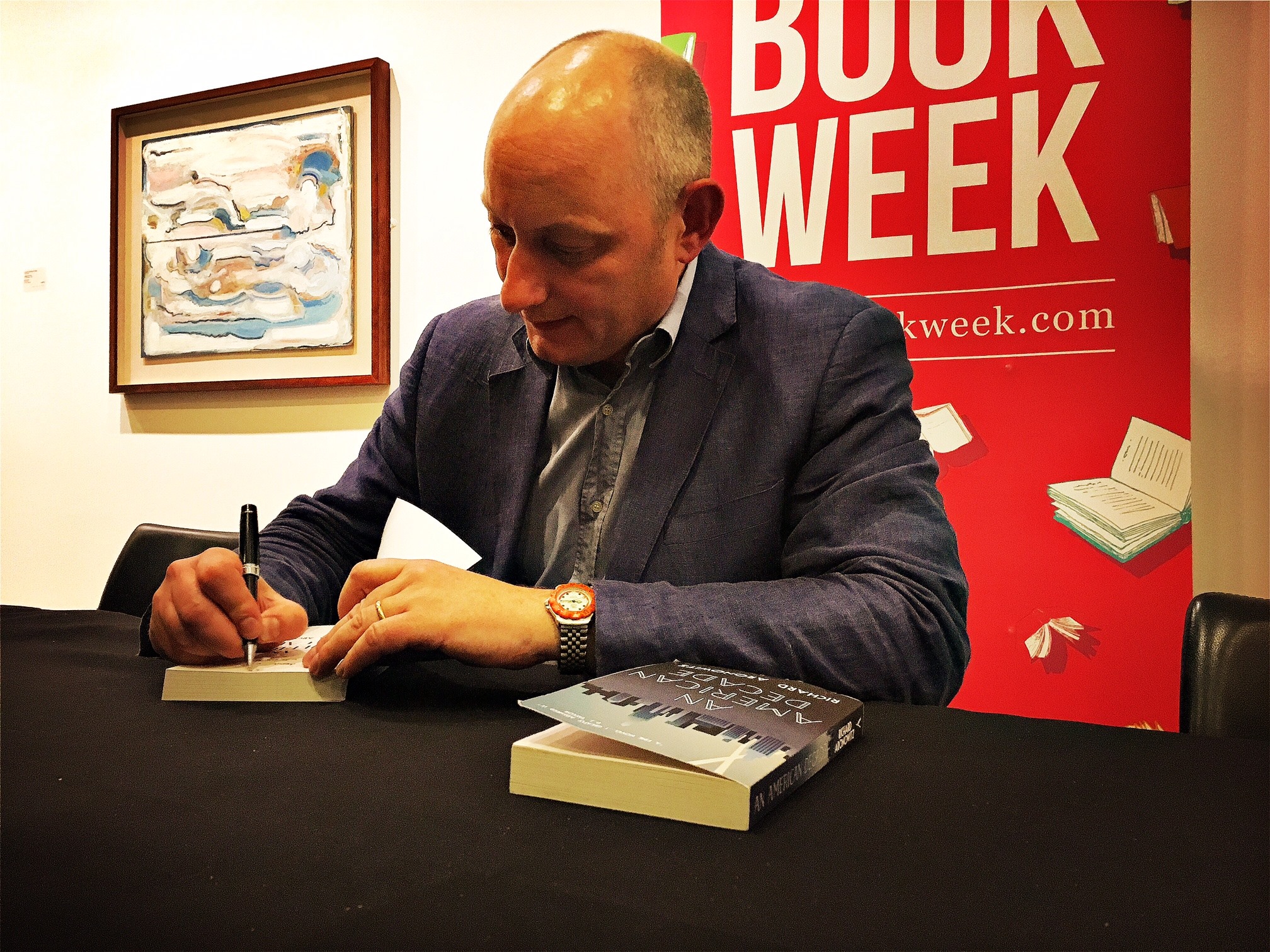 Calling himself a “vetter,” the provenance and identity of every work of art created before 1945 is checked by him and his small team before it is offered for sale at the auction house. This “fine-toothed comb approach” is intended to weed out any work among the many thousands consigned each year that might have an unresolved Nazi-era looting or forced sale history.

“The stakes are very high and the buck stops with me and the team. If we let an unrecovered item of Nazi loot into one of our sales, it can do unbound reputational damage to the auction house and raise questions of good title and moral and legal ownership with the owner and potential buyer,” Aronowitz told The Times of Israel.

When he does spot a work that was looted or lost and not recovered after WWII, he initiates a dialogue between the current owner and the heirs of the pre-war owner to try to bring about a settlement between the claimant and current owners. It is usually then sold in auction and proceeds are split. It’s often 50:50, or slightly less, for the claimant.

“The whole idea,” says Aronowitz, “is trying to find a just and fair solution to both parties.”

One painting that Aronowitz remembers particularly fondly is a fine Abraham van Beijeren still life that was offered to Sotheby’s London for sale in 2008. Aronowitz very quickly realized, however, that the painting had been looted in 1941 by the Nazis in occupied Holland from the collection of the Berlin Jewish couple Alfons and Hedwig Jaffé while it was on deposit for safekeeping at a museum in Leiden.

Aronowitz put the consignor in touch with the two elderly Jaffé heirs, living in England, who sent him a black-and-white photograph of the work from their family’s prewar photograph album that had been saved from their home in Berlin. 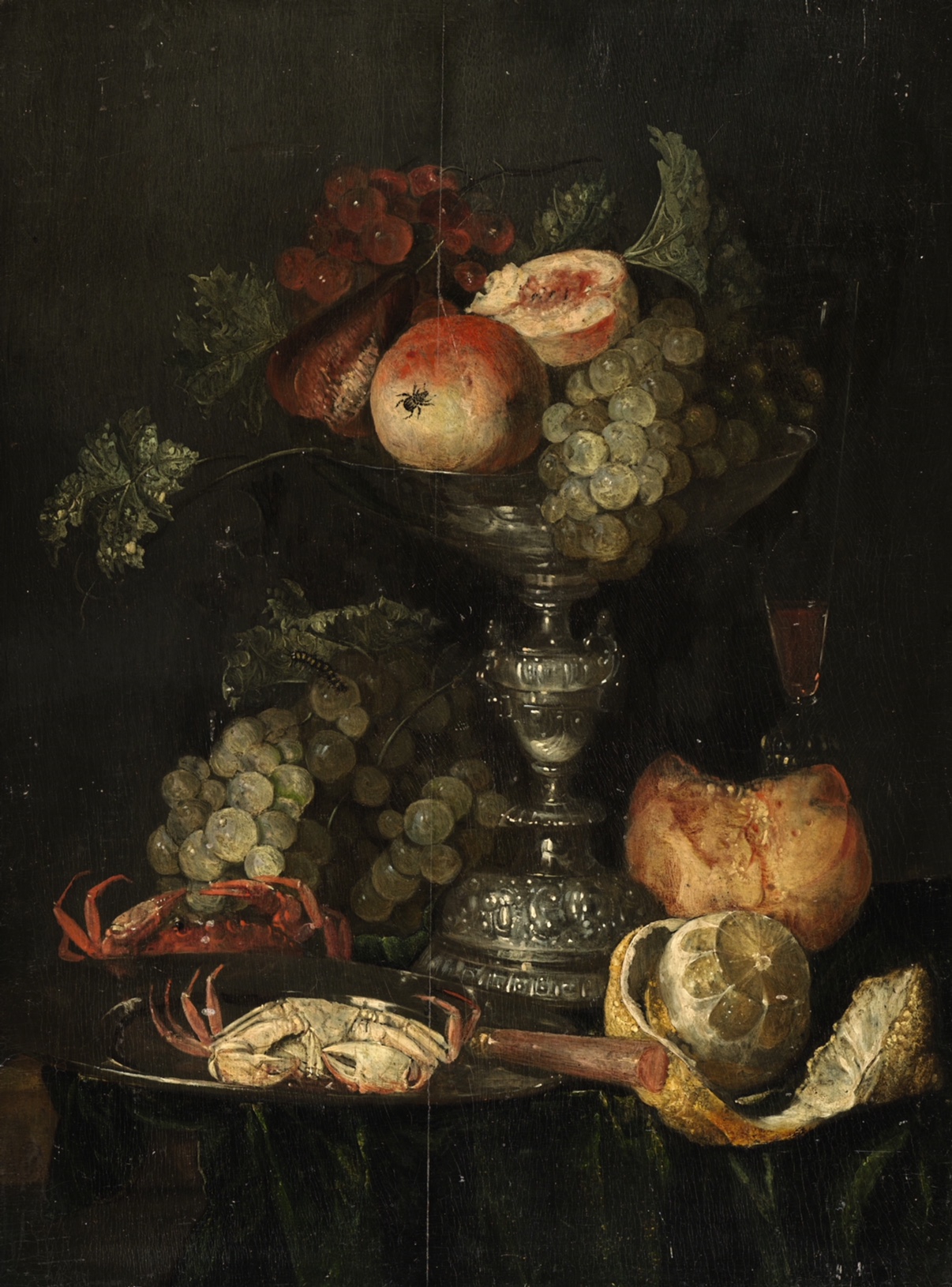 A dialogue was begun between the Jaffé heirs and the young owner, who had inherited the painting from his late parents with no knowledge at all of its prewar history, and against a finder’s fee the work was returned to the heirs in the spirit of the just and fair solution proposed by the “Washington Principles.”

Unlike the headline-making prices raked in for restitution of museum paintings sold at auction (like Gustav Klimt’s portrait of Adele Bloch-Bauer which sold at auction in November 2006 for $135 million), the works that Aronowitz handles, not coming from museums, are often sold for relatively modest amounts.

Aronowitz, an expert in modern German art and Expressionism, and fluent in German, fell into his role at Sotheby’s by coincidence following his own journey into discovering his mother’s turbulent past.

Raised in a non-Jewish home, he describes his very English childhood as the youngest of four brothers in the 1970s as one of “Cotswold-stone cottages, hills, woods and streams.”

He knew little of his mother Doris’s history until he was 10 years old and discovered she had come to England on her own from Wuppertal, Germany as an 8 year old on the Kindertransport before the war. Strange, he thought, how she kept a broken necklace of deep-red amber beads hidden away in her jewellery box. Later, he found out that the beads were among the few mementos of her mother, Miriam, that his mother had been able to bring with her to England. 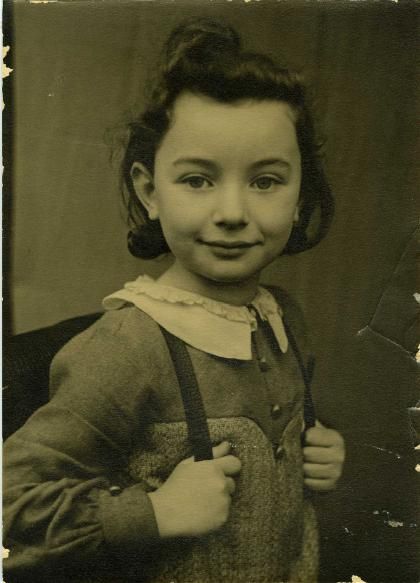 And then there was the arrival of his German-sounding great-uncle Isy from Melbourne in 1979, with the numbers tattooed in blue ink on his left wrist. Aronowitz remembers Isy grabbing the porridge bowl from him, scraping it down to the glaze so that not a drop would be wasted.

“What on earth was his story and why was he here in my apparently idyllic English childhood?” Aronowitz wondered at the time.

Richard Aronowitz, born Mercer, took his mother’s maiden name Aronowitz as his nom de plume when his mother died in 1992, a day before her 62nd birthday. And then the self-appointed family archivist and researcher started trying to piece the history together.

“I asked endless questions about it all and have never really stopped asking them since,” he says. 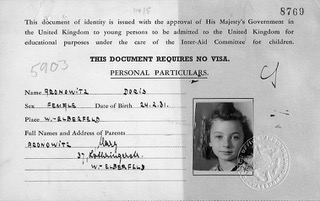 After relentless pushing, Aronowitz found out that thanks to Isy’s contacts, his mother Doris had been able to come over on one of the Kindertransport trains in July 1939, from Wuppertal, and then by boat from Holland to Harwich. She lost her mother and aunt Hedwig in the Holocaust, while her uncle Isy survived the Lodz Ghetto, Auschwitz, Buchenwald and the Death March.

Now a father himself, the 47 year old’s fascination with his family’s past prompted him to write his debut novel, “Five Amber Beads,” in 2006. Although it is a fictional story of provenance researcher Charley Bernstein looking into the ownership history of works of art between 1933 -1945, woven very heavily into it are strong autobiographical elements.

Most noticeable is that of the character Isy, incorporating much of his great-uncle’s history — in particular the wartime entries translated from German into English from his tan-colored diary.

As a complete coincidence — or perhaps because of the book — he was invited to become head of the restitution department at Sotheby’s in London, looking into exactly these matters of cultural loss and plunder during Nazism, that same year. 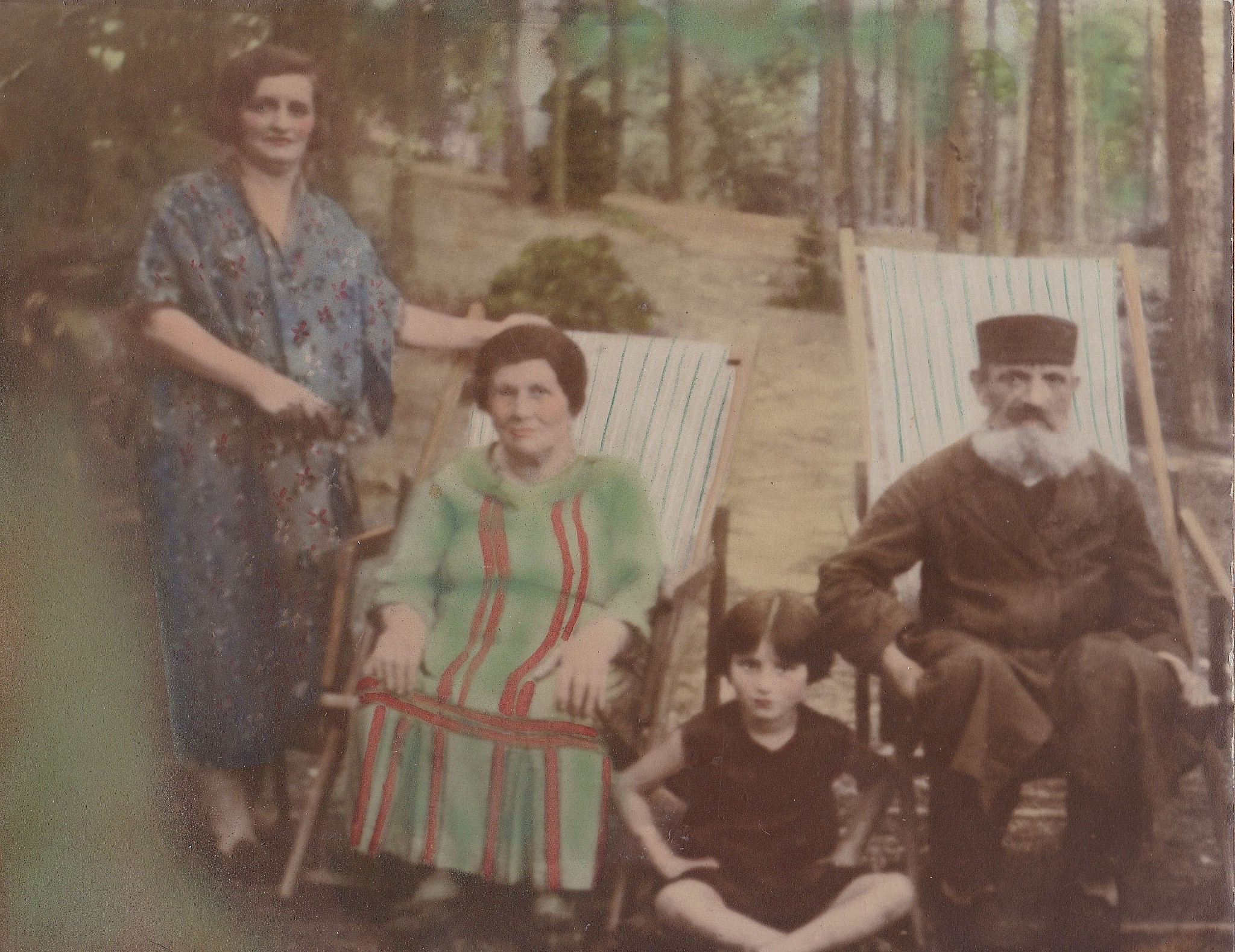 A photo of the extended family of Richard Aronowitz in early 20th century Lodz, Poland.

Aronowitz, who was formerly the senior curator at the London Jewish Museum of Art, is also an accomplished poet. And earlier this year, he published his second book, “An American Decade,” about mid-20th century history, inspired by his mother’s story of arriving on the Kindertransport and of not knowing who her father was.

The main character, a Broadway singer named Christoph, is based on Aronowitz’s maternal grandfather who is believed to have moved from Wuppertal, via Hamburg, to New York in October 1930 — four months before Doris was born.

As the decade unfolds, Christoph witnesses the rapid rise of American organizations sympathetic to Hitler. As the human horrors of Nazism close in he is forced to act and sets sail across the Atlantic in search of a hidden piece of his history. 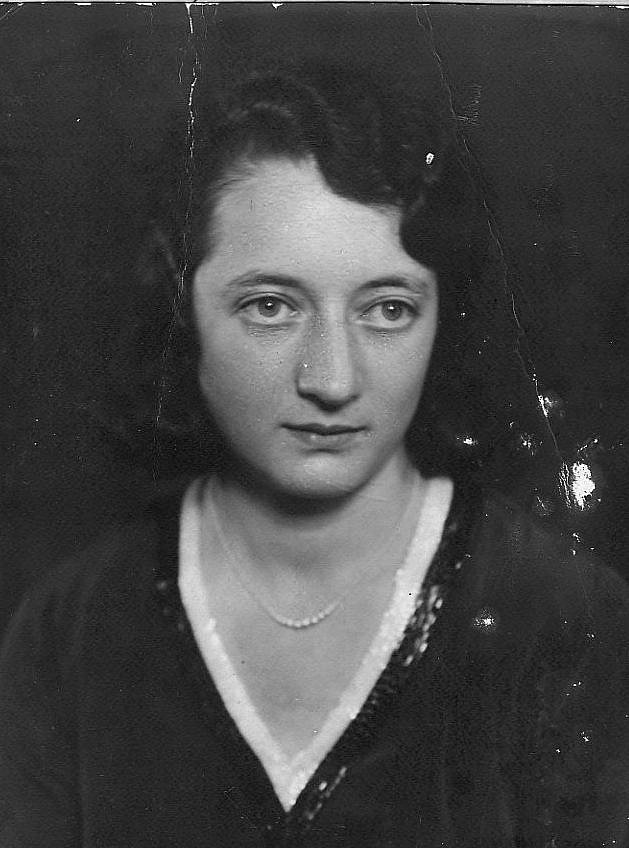 Richard Aronowitz’s grandmother Miriam, on his mother’s side.

It is the hidden history of plunderers, fences, traders and owners, that consumes the life of a restitution specialist. But it’s now a race against time as the window of opportunity is getting smaller.

Says Aronowitz: “Every restitution case becomes more pressing to resolve as each month and year passes, both because verbal testimony is slowly lost and because the claimants themselves are dying out.”

As family members die out the challenge will be gaining access to first and secondhand information. He says that eventually, at some unknown point in the future, restitution of art and cultural objects lost between 1933 and 1945 will likely come to an end because of this evanescence of information and the passing of claimants.

For now, he is still busy at work ensuring he is up to date with developments in the restitution field around the world. He has just returned from Amsterdam where he met with a provenance researcher from the Rijksmuseum and a Dutch lawyer specializing in art restitution cases.

It is history — be it in a painting or in a person — that consumes Aronowitz. In his work and in his personal life, the two have become inextricably intertwined over the years, and his thoughts are often reflected in his works of fiction.

As narrator Charley Bernstein sets off from New York to Tel Aviv in “Five Amber Beads,” he philosophically considers how people mistake the sea for a watery wasteland, “a desert devoid of life.”

Aronowitz writes, “Surfaces beguile us — we see a sheer granite wall and cannot get beyond it. We look at a painting’s surface and cannot see behind it. There are lives that go on beneath all of these things.”