The Void at the Heart of ‘Gurlitt: Status Report’

BERN, SWITZERLAND — So the fog lifts, sort of. Still, what a mess. 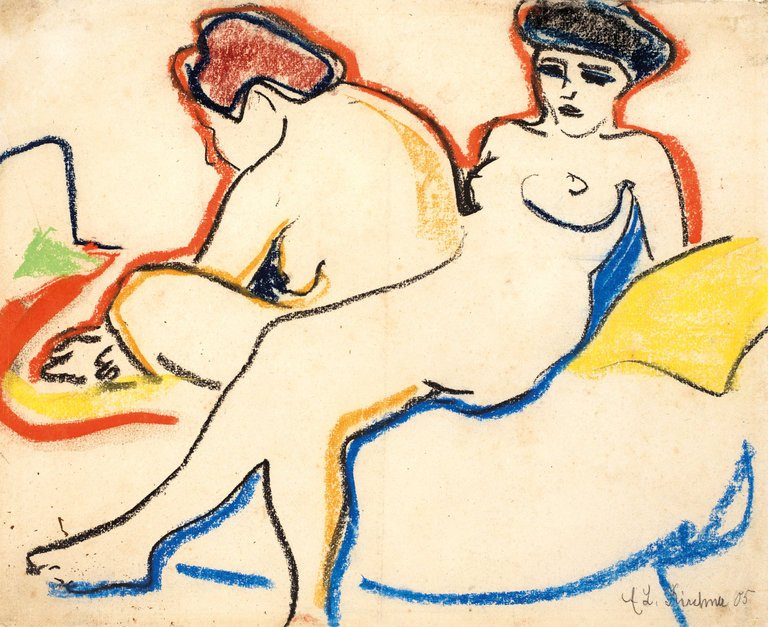 Ernst Ludwig Kirchner’s “Two Nudes on a Bed” was acquired by Hildebrand Gurlitt, Cornelius’s father. It is on view in “Gurlitt: Status Report” at the Kunstmuseum Bern.

Two coordinated exhibitions infelicitously titled “Gurlitt: Status Report,” one here in Bern, the other at the Bundeskunsthalle in Bonn, Germany, offer up a few hundred of the more than 1,500 works squirreled away by the ghostly German recluse, Cornelius Gurlitt. When the trove came to light a few years ago, the discovery made front-page news and Gurlitt miserable. He died shortly after, at 81, leaving his art to the Kunstmuseum Bern — and behind him a trail of unanswered questions.

For starters, why Bern? Museum officials were evidently as stunned as anyone. Gurlitt exchanged some pictures for cash through Bern dealers. His uncle once taught music in the city. We have no clue what Gurlitt was thinking. The good news: the art ended up in public hands, excluding what goes back to rightful owners. 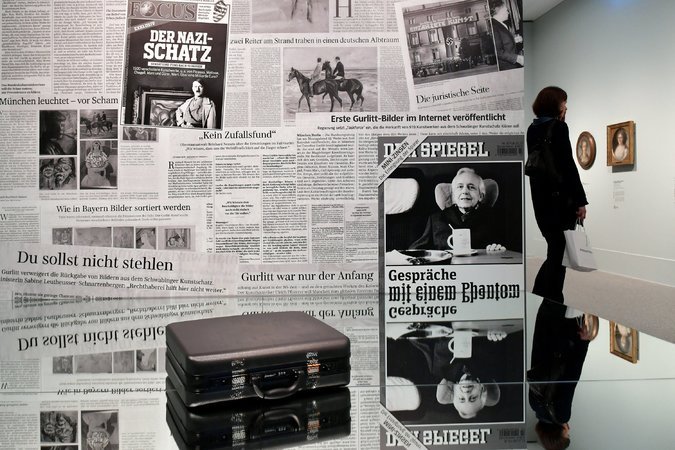 Newspaper clippings on display in the exhibition “Gurlitt: Status Report” at the Bundeskunsthalle in Bonn, Germany. The show includes Cornelius Gurlitt’s suitcase, one in which the police found a hidden Monet.

But restitution is not straightforward. At the Bern exhibition, focused on Gurlitt’s holdings in what the Nazis called “degenerate art,” Ernst Ludwig Kirchner’s “Two Nudes on a Bed” is a sinuous hieroglyph in colored chalk. Hildebrand Gurlitt, Cornelius’s father, acquired it in 1928 for the museum in Zwickau, Germany, when he was director there. A missionary for the avant-garde, Hildebrand’s taste landed him in hot water. He was fired in 1932. The Kirchner was confiscated. It surfaced in 1940 in a Swiss sale.

Kirchner had killed himself by then, and Hildebrand, notwithstanding his own part-Jewish ancestry and modernist affiliations, had been hired as one of Hitler’s private art dealers, gobbling up stolen and other works to glorify the Führer while surreptitiously pocketing what he liked for himself.

The Allies only rewarded his finagling after the war by deciding that the art expunged from German museums didn’t have to be returned. (You can’t loot yourself, was the logic.) Hildebrand, and then — by inheritance — Cornelius, could rightly claim to be the owner of “Two Nudes” along with other pictures that once belonged in public collections.

Hildebrand even lent the Kirchner to a show in Lucerne, Switzerland, in 1953. There’s a photograph in the Bern exhibition of that show. Like “Gurlitt: Status Report,” it recounted the Nazi campaign against modernism. I looked around at the visitors in Bern studying the wall texts explaining the Nazis and art. The museumgoers in the photograph, wearing pillbox hats and baggy suits, were doing the same. What’s that metaphor about rowing? You can’t move forward without looking back? 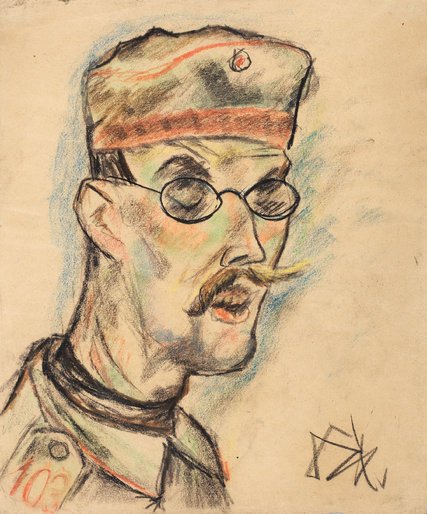 At the Kunstmuseum Bern, Otto Dix’s “Schütze vom Infanterieregiment 103” was seized by the Nazis as “degenerate” art. Dix chronicled the brutality of war and the decadence of postwar German society.

Did I mention that Kirchner studied with Hildebrand’s father at the Technical University in Dresden? The Gurlitts were distinguished writers, art historians and painters. Hildebrand’s grandfather, Louis Gurlitt, painted plein-air sketches in the 19th century, some very beautiful ones. Cornelia Gurlitt, Hildebrand’s sister, was an artist in the Expressionist orbit of the Blue Rider group, influenced by Chagall.

Cornelia’s drawings in Bern and Bonn are touching and urbane. She turns out to be another casualty, committing suicide in 1919, pregnant with the child of a married lover, the art critic Paul Fechter. Inconsolable, Cornelia’s father blamed her death on, of all things, the influence of the Lithuanian Jews of Vilnius, where Cornelia had volunteered to work as a field nurse on the Eastern Front.

Breathless news accounts when the Gurlitt collection was uncovered speculated about a $1 billion trove of art. The fact is, it’s not really a collection, not in the true sense of the word. It’s a dealer’s inventory, this and that, about as curated as the cosmetics counter of a department store. Buying for Hitler, Hildebrand had a blank check and no scruples, obtaining works by Delacroix and Fragonard, Seurat and Courbet, sometimes to fill gaps in German museums left by the elimination of modern art, skimming off what he wanted to keep or sell. 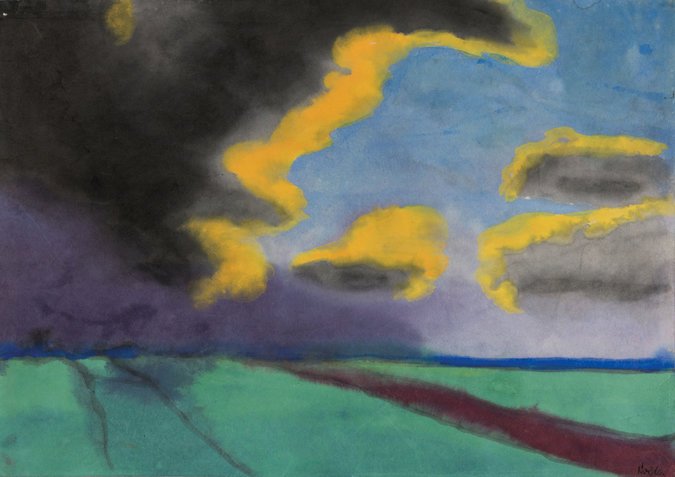 He acquired a Paul Signac river scene; watercolors by August Macke; horses in a landscape by Franz Marc; a Monet of Waterloo Bridge; a Millet, a Boucher, some beautiful prints and drawings by Kollwitz, Munch, Liebermann and Menzel.

The Frick Collection, it’s not.

Of the 1,500 Gurlitt works, hundreds are family heirlooms by Louis and Cornelia; hundreds are Expressionist pictures and trace back to German museums; hundreds more, mass-production prints, have no real value. 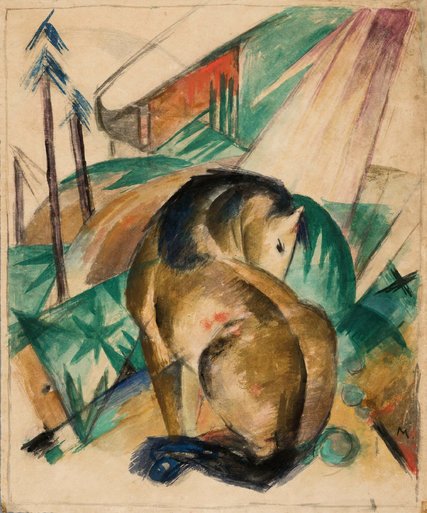 At the Kunstmuseum Bern, a “degenerate” Modernist work by Franz Marc, “Sitzendes Pferd” (“Seated Horses”), was in the possession of Cornelius Gurlitt.

So we’re talking 100 or maybe 200 works whose provenance, or previous ownership, may be a legitimate matter of debate and inquiry — ones possibly looted or acquired at forced sales by Jewish owners.

Authorities announced earlier this month that they had identified the former owner of a portrait of a young woman by the 19th century French academician, Thomas Couture. I spent a few minutes pondering it in the Bonn show (whose subject is mostly Hildebrand). The work belonged to Georges Mandel, France’s interior minister in 1940. His opposition to the Vichy regime got him arrested and killed. After the war, Mandel’s lifelong partner, the French actress Beatrice Bretty, filed a claim for the Couture, which had been confiscated, noting a stitched hole in the canvas. Researchers identified the telltale mark the other day. 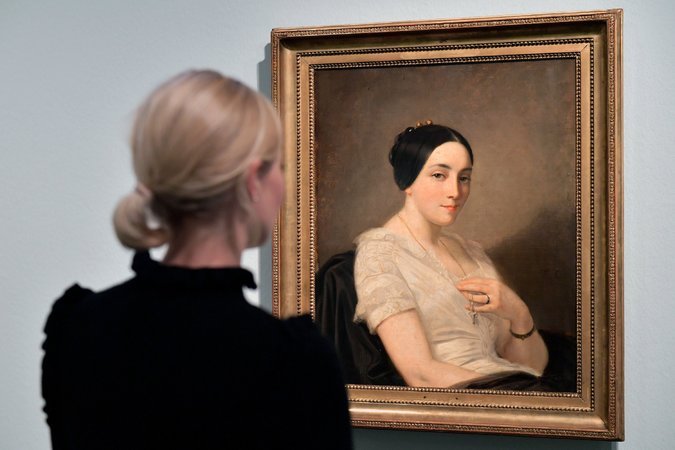 A visitor looks at “Portrait of a Sitting Young Woman” by the French artist Thomas Couture, in “Gurlitt: Status Report,” a double exhibition of works from the Cornelius Gurlitt estate. The authorities have recently identified the former owner.

That made six works traced back to their owners since Gurlitt researchers began their investigations four years ago. There have been grumblings in Germany about the time and money spent, yielding meager results, a few eyebrows raised over the confiscation of Cornelius Gurlitt’s art in the first place. The official excuse was tax evasion. The Germans pulled an Al Capone.

But perhaps what’s most annoying is how Gurlitt still eclipses the art.

It is Cornelius’s suitcase, the one in which the police found a hidden Monet, that you first see in Bonn, displayed like an icon in the opening gallery. In Bern, it is his dilapidated file cabinet, where he kept drawings and prints.

Cornelius is the void at the heart of “Gurlitt: Status Report,” a man who never registered his address, who didn’t watch television or see a movie after 1967, a self-appointed keeper of the family flame.

The line between pathology and strategy can be fuzzy. Gurlitt lived for his art, he said, though it wasn’t really his. For someone who came of age with rock ’n’ roll, he was a castaway from an earlier time to judge by accounts of his stuffy Munich apartment, with its threadbare sofa, its antique cart for schnapps, its Wagner collection and shelves stocked with Thomas Mann, porcelain trinkets and art books. 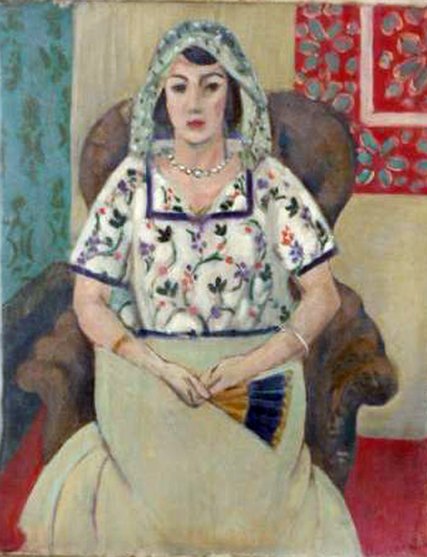 Henri Matisse’s “A Woman Sitting in a Chair,” shown on the Lost Art website, was among some 1,400 works German authorities confiscated from the residence of Cornelius Gurlitt, son of Hildebrand Gurlitt, an art dealer who worked for the Nazis. Looted from the Rosenberg collection, it was returned to the heirs.

Among these was a postwar catalog mentioning a looted Matisse of a seated woman from the Paul Rosenberg collection. (One of the six, since returned to the heirs.) Cornelius made a note in the catalog about the picture.