Poland aims to stop auction of painting lost in WWII

Officials in Warsaw have launched efforts to prevent the auctioning in London of a painting that they believe was looted from Poland during World War II.

A version of Henryk Siemiradzki's The Sword Dance.

The painting, by 19th-century artist Henryk Siemiradzki, is included on a list of Poland’s wartime losses, according to officials. It is scheduled to be put up for auction at Sotheby’s of London on November 28.

The Polish Ministry of Culture and National Heritage says it has undertaken efforts to have the painting withdrawn from the auction.

Magdalena Ogórek, a journalist specialising in tracing works of art that were once stolen from Polish collections, has told Poland's public television broadcaster TVP that Siemiradzki’s canvas has been offered for sale by a German collector who inherited it from his parents.

She said the matter is complex from a legal point of view: the Polish state has to produce a large body of documents to prove that a given work of art was the property of the state, a museum or a private collector, and that it had been looted.

In view of the fact that many written documents were lost during the war, in many cases it is impossible to present sufficient proof that a given work had been looted, Ogórek said.

The painting in question, entitled The Sword Dance, is the smallest version of several of Siemiradzki’s works of the same title. It was shown at Siemiradzki’s one-man exhibition at Warsaw’s Zachęta Gallery in the summer of 1939.

In a statement for the Polish Press Agency (PAP), Sotheby’s of London has said that “it is working with the Ministry of Culture and National Heritage in order to explain fully the situation” relating to Siemiradzki’s painting.

Another version of Siemiradzki’s The Sword Dance was sold at Sotheby’s in New York for USD 1.8 million. 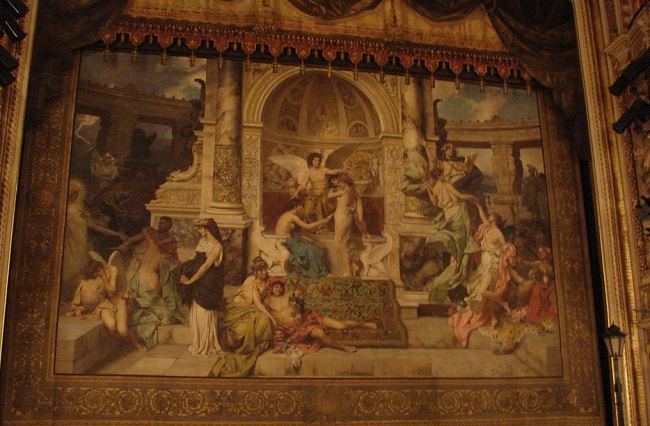 A monumental painted curtain at the Juliusz Słowacki Theatre in Kraków, one of Henryk Siemiradzki's best known works.

In recent years, two other paintings by Siemiradzki have been sold at Sotheby's in London: By the Fountain and The Tightrope Walker.

Born in 1843, Siemiradzki studied in St. Petersburg and Munich. He lived in Rome for many years. He died in 1902 and was buried in Warsaw but later his remains were moved to the Skałka Pauline Church in the southern Polish city of Kraków.