Nazi art theft: How Hitler's art dealer amassed looted paintings to save his own skin 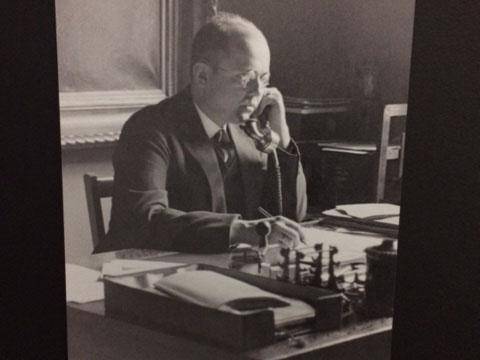 Hitler's art dealer, Hildebrand Gurlitt, whose collection of artworks are being exhibited in Germany

What was Hitler's view of art? Even today, to be reading Mein Kampf on the upper deck of a clean and orderly public train one dark November night in Germany, feels a little staining, as if one's very finger ends might just turn an accusatory yellow. Should it have been wrapped in plain brown parcel paper in order to avoid any stranger's eye connecting with that malign, gilded swastika on the front cover? And then there are Hitler's words themselves, written by a man imprisoned in the fortress of Landsberg am Lech in 1924, nine years before he came to power, all six hundred pages of them, pent, furious, illogical. What could have motivated Hitler's level of hysteria? The total collapse of Germany. What could have brought his country to its knees?

The nightmare-inducing, pestilential figure of the Jew is at the heart of his hectic story, of course, that 'bacillus which is the solvent of human society, that 'pestilence worse than the Black Plague.' There is such self-righteousness, such a dangerously overweening level of self-belief in his words: 'by standing guard against the Jew I am defending the handiwork of The Lord.' How to prevent the spread of 'the moral mildew of the chosen race?' Years on, there was to be a final solution.

This month a sensational story which first burst into life in 2012 about art, the Nazis and a part-concealed Jewish identity, stutters to a fascinatingly inconclusive conclusion in Germany with the opening of two exhibitions, one in Bonn and the other in Bern. In that year, an old man called Cornelius Gurlitt was accused of tax evasion by the authorities in Augsburg. That accusation led to the discovery of an extraordinary trove of art in his apartment in a very respectable part of Munich. For months the authorities kept the story to themselves. Then the press got wind of it. Those months of concealment gave the story of its discovery by the authorities some head wind.

The art had belonged to his father Hildebrand, who had been a museum director and art dealer from the time of the Weimar Republic in the 1920s, and throughout the Third Reich and on. Hildebrand had died in a car accident in 1956. It was presented as nothing less than the story of the wheelings and dealings of Hitler's principal art dealer - and here was the loot perhaps, in the custody of his 80-year-old, reclusive son, in the full dazzle of publicity. 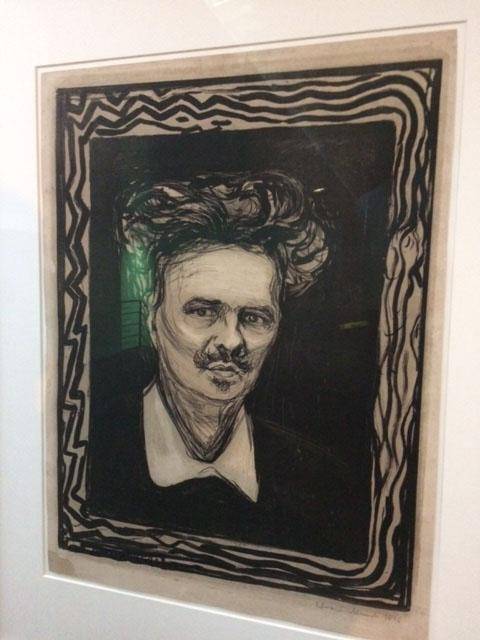 The two exhibitions put on display 400 of the 1500 works in the Gurlitt collection, 250 in Bonn and 150 in Bern. They also tell the immensely complicated story of that seizure and its subsequent impact, demonstrate how the provenance experts of Germany and Switzerland responded to its shock waves, and show off some of its best works by such modern masters as Klee, Munch, Dix, Marc, Nolde. And, most interesting of all, they present in great detail the convoluted, morally dubious story of Hildebrand Gurlitt himself within the context of the tumultuous times through which he lived.

Yes, it was one respectable man's fear of the consequence of having been condemned as a menschlich (a man of mixed race, one quarter Jew) and sent to the camps, which caused the Dresden art dealer and museum director Hildebrand Gurlitt to work with the Reich Ministry in order to save his own skin. A Nuremberg Law of 1935 had characterised - and therefore condemned - him as a 'second-degree half-caste'. He was a vulnerable man, aware of the pressing need to survive in an ever more dangerous world. The only answer was to cozy up to the regime. He therefore perjured himself by dealing in and disposing of works which Hitler condemned as degenerate, which were snatched in their thousands from public museums, and looted from the homes of Jewish collectors. More than 20,000 works were confiscated in all. 'We even hope to make money from the garbage,' quipped Goebbels. 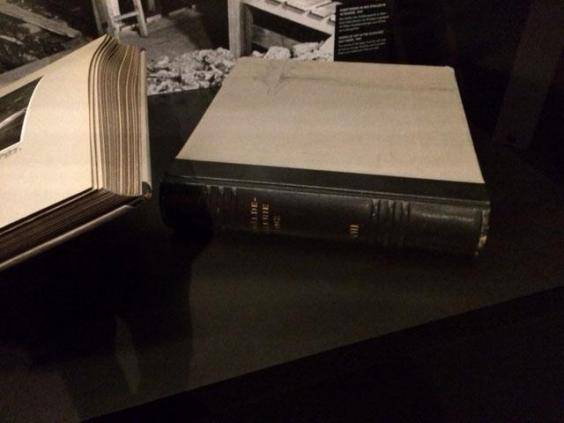 A leather-bound portfolio of artworks for presentation to Adolf Hitler, Bundeskunsthalle, Bonn

Hildebrand Gurlitt's skills as an art dealer with international connections were extremely useful. The Reich desperately needed foreign currency to fund the war effort. Hildebrand bought, sold, and acquired work for German museums and other collectors, and amassed works for his own private collection, enriching himself in the process. He became Hitler's art dealer. And after the war, under close scrutiny at the de-nazification tribunal, he slipped through the net that appeared to be closing around him by characterising himself as a victim. And, what is more, he kept much of what he had acquired.

In the basement of the Kunst Museum, Bern, 150 of the 1,500 works in the Gurlitt estate have gone on display, all examples of what Hitler and his cronies characterised as 'degenerate art'. Most of them are works on paper. The dull green metal plan chest in which they were once stored, all fifteen drawers of it, faces us as we enter, utterly humdrum. The fact that the works were kept in the dark means that so many of them have retained their colourful vibrancy. Age has not faded them one whit. 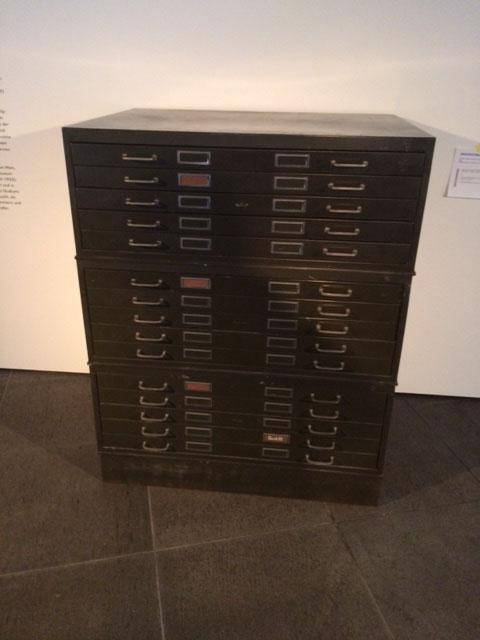 What exactly does it mean though, this word degenerate? 'There is no logical explanation because it was not logical,' Nina Zimmer, the formidable director of the Bern museum tells me through the manufactured allure of her brilliantly powerful red lipstick. 'It was an ideological impulse.' Even Henry Moore was condemned. Why Moore of all people? She smiles. 'Oh, the work was probably a little sketchy and modern looking...' Perhaps nothing more than that then.

What fascinates us above all things else is the realisation that Hitler, a poor artist himself, took art so seriously, that he believed in its power to transform human lives. It almost beggars believe that the fate of Expressionism was decided at a rally in Nuremberg. No one takes art that seriously now. 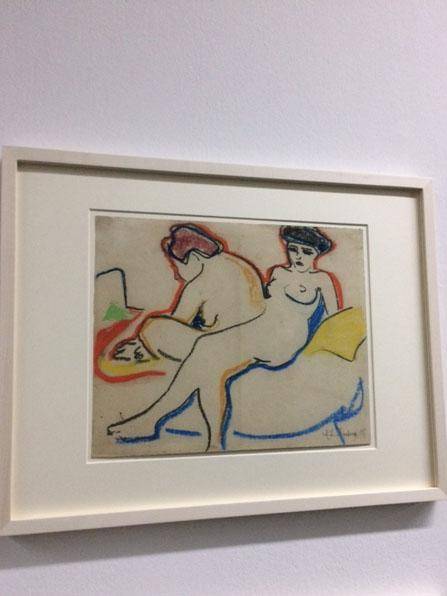 That is why the works on these walls were so dangerous, because they had the power, in Hitler's opinion, to deprave the human spirit. Do all these works have something in common then to our eye now? Yes, undeniably. They show off what we might loosely describe as the free flow of the human spirit. Hitler believed that art should be elevating, noble, in tune with the aristocratic principle. The classical and the realistic, in a world shown to be settled, orderly and steady, were his ideals. The art here is, by comparison, full of bodily distortion. It is wild, impulsively improvisatory, dangerously subjective, stylistically lawless and untameable. It knows no expressive boundaries. You could even call much of it pessimistic - or even schizophrenic. Did not Jung describe the works of Picasso as pathological in 1932?

Hildebrand Gurlitt himself was a tissue of contradictions, an opportunist. Before and after the Second World War, he had championed the cause of modern art that he was complicit in denouncing during the years of the Reich. He was to champion it yet again after the war. And yet even as he denounced it, he was also dealing in it to his own financial advantage. In the 1920s, as a successful museum director in the Weimar Republic, he had put on shows of work by the moderns, arguing that it was the new work by such painters as Beckman which would serve 'as a bait for everything spiritual', as he put it. He wanted avant-garde art to play its part in bringing about a social revolution. He was a German cultural idealist. Like Hitler, he wanted to re-build the reputation of Germany as a nation of culture. 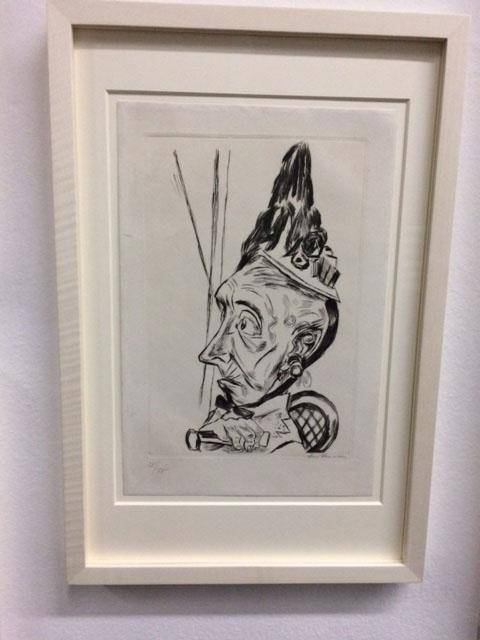 Later on these works were seized wholesale by the Nazis, and many artists suffered brutally as a consequence. They went into exile. They committed suicide. They hid themselves away, consumed by an inner darkness. Many of their tragic human stories are told here. Emil Nolde had 1,052 works seized from German museums. He protested with great violence. Others protested on his behalf. Was his work not the very epitome of Germanness? It was all to no avail. He withdrew to his studio in North Germany and, living in isolation, devoted himself to painting 1,300 watercolours on very small sheets of paper. He described these works as his 'unpainted paintings'.

At the kunsthalle in Bonn, we see a much broader range of works from the Gurlitt trove altogether, from Durer and Holbein to Monet, Degas and Picasso. Here are many works which Hitler himself would have favoured, 18th-century French paintings, for example, of which his own hero, Frederick the Great, would have approved, and consequently the kinds of art that might yet be shown in the Fuhrer Museum in Linz, a grandiose scheme which was never realised. Gurlitt acquired many works for that fantasy museum. In one cabinet there are leather-bound volumes showing off works newly acquired it. These were produced twice a year, and shown to Hitler at Christmas and on his birthday. Twenty of them still survive. Just before the American army marched into Munich where the works were being stored, the locals looted it. Hundreds are still missing. 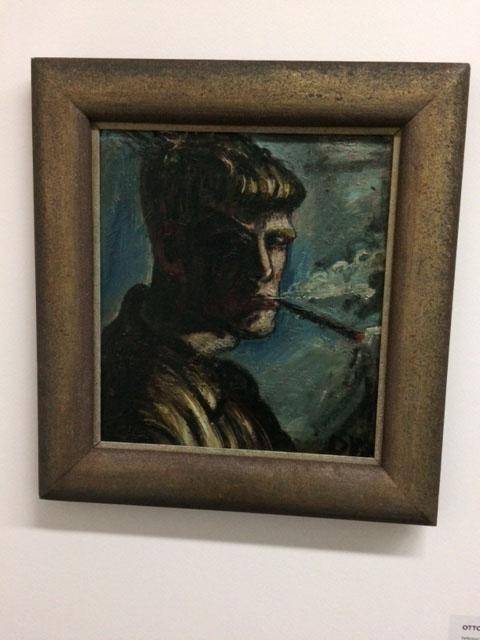 The subject of looted art and restitution to its rightful owner remains a topic of agonised, burdensome debate in Germany even to this day. So often the labels that describe the provenance of individual works in the Bonn show remain maddeningly inconclusive. No one really knows whether they were looted or not. Too much has been lost. Too much remains to be found. Meanwhile, the seekers of the provenance of these works - who exactly acquired it and when, and then who acquired it after that - continue their dogged, unglamorous and morally impeccable work.

At the press conference for the exhibition in Bonn, Ekkeheart Gurlitt, an elderly cousin of Cornelius Gurlitt, outrageously swaggery in his cowboy hat, neck wreathed in great gobbets of amber, denounces the work of the exhibition makers in no uncertain terms. Why is it always the name of Gurlitt which is spoken in the context of looted art? All you have proved is that six of these works have been looted! Six! he thunders. He is an embarrassment. Wounds have been torn open. He is dealt with brusquely and rudely. The press conference is ended – time has run out, we are told. That seems unlikely. The previous day's press conference had allowed ample time for questions, and many of the press in the audience would have wished to interrogate this man on the record.

Meanwhile, the name of the Gurlitt family is tainted forever by the fact that Hildebrand Gurlitt did all those deals with the villains of the Reich in order to save his own skin.