A St Gallen museum has returned two 17th-century ornamental silver and gold-plated ships plundered by the Nazi regime to the heirs of a German-American Jewish art collector. 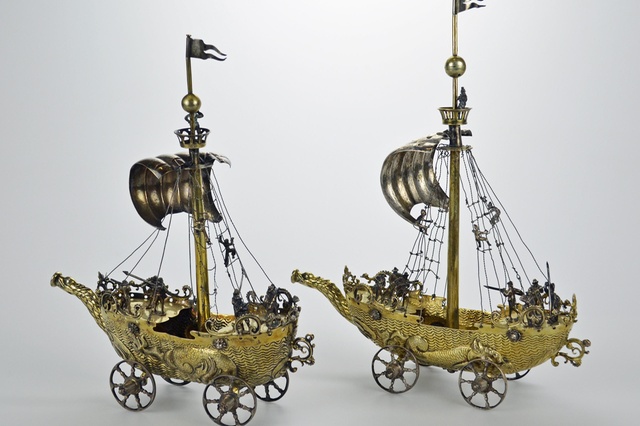 The silver-and-gold plated ornamental ships were made in 1630 by the German craftsman Georg Müller from Nuremberg (Historisches und Völkerkundemuseum, St Gallen)

The unique ornaments, worth €130,000 (CHF150,000), were part of an art collection in St Gallen’s history and ethnology museum, located in northeast Switzerland.

The ships, which measure 31.5 centimetres and 27.5 cm high, had been among 140 objects donated to the museum in 1967 by entrepreneur Giovanni Züst, who had started his silverware collection in the interwar period, according to the Swiss News Agency.

Since 2010, the museum has been investigating the origin of the two ornaments, originally made in Nuremberg, Germany, it said in a statement on Monday.

It established that the ships originally belonged to Emma Budge (1852-1937), a wealthy German art collector from Hamburg who took American nationality after marrying banker Henry Budge. She owned a collection of 2,000 artworks including furniture, textiles, sculpture, goldsmith’s work, paintings, porcelain and earthenware valued at one million Reichsmarks in the 1930s.

When she died in 1937, the Nazis forced her executors to sell her collection. Research has shown that the funds from this sale were transferred to a Third Reich account and did not go to the heirs.

He added that so far, only 150 to 200 objects from the original Budge collection have been located in other parts of the world.

Switzerland is a signatory to the 1998 Washington Principles on Nazi-Confiscated Artexternal link, which aims to facilitate the restitution of Nazi looted property.