Saved from the Nazis, hidden by a recluse — and finally on show

As Cornelius Gurlitt’s art collection goes on display in Bonn and Berne, David Aaronovitch discovers a rich story and some breathtaking works 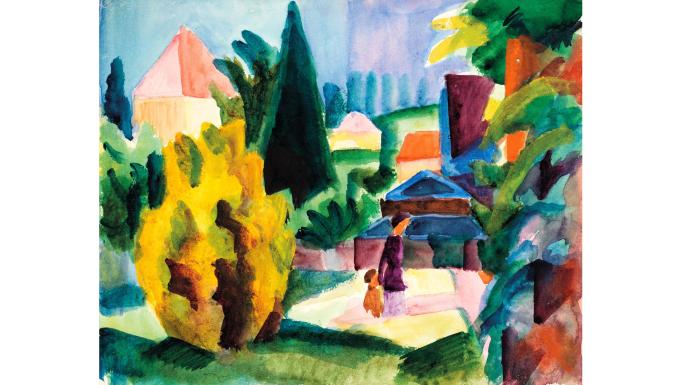 In the Palace Garden at Oberhofen by August Macke, 1914, is on show in Berne

In 1964 a woman called Benita Gurlitt wrote to her brother Cornelius about their father’s estate. Hildebrand Gurlitt had died eight years earlier in a car accident on the autobahn as he drove westward from Berlin to the Ruhr. In addition to the money he had left his family, he had also bequeathed a magnificent, tainted collection of paintings, watercolours, drawings and sculptures.

“I sometimes think,” wrote Benita, “that his most valuable legacy has turned into the darkest burden. What we have is locked away in the graphics cabinet or kept behind pinned-up curtains — no one sees it, no one enjoys it. I tremble with fear every time I even think about it.”

Fifty years after the letter was written, Christoph Edel, a lawyer appointed by a court in Munich as a guardian for Cornelius Gurlitt, became the first non-family member to enter the now elderly man’s second residence. This was a cottage in a suburb of the Austrian city of Salzburg; a scruffy, mildewed, detached 1960s house with drawn curtains and a crude device rigged to stop people looking through the letterbox. Together with an art appraiser the lawyer began to search through mounds of old newspapers, books and cans of food looking for treasures. 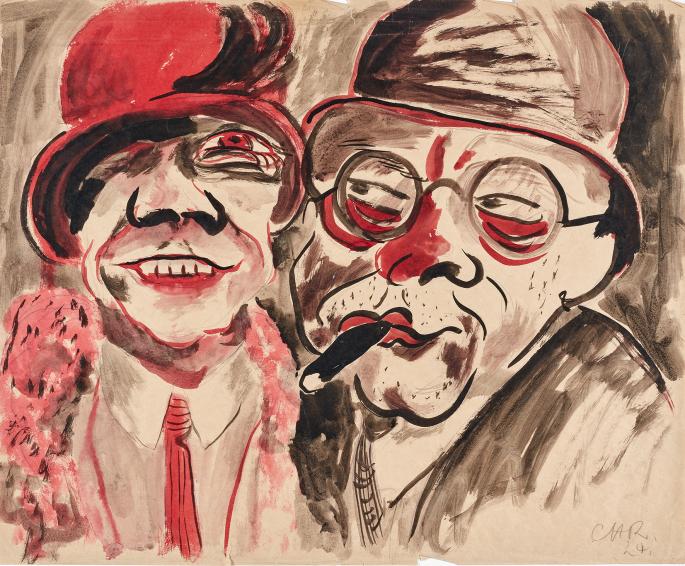 Couple by Hans Christoph, 1924, part of the exhibition in Bonn

Behind some bookshelves he found a painting whose style he recognised. “Is this a Monet,” Edel asked the art appraiser. “No,” came the reply, “it’s a Manet.” On the floor was a picture of a city bridge on a misty day. “Now that,” said the appraiser, “is a Monet.”

In all, in his fifth-floor apartment in Munich and in the Salzburg house, Cornelius Gurlitt had been keeping some 1,500 works of art amassed by his father. For the world the significance of the find, quite apart from its artistic value, was that Hildebrand Gurlitt had been one of the most important art dealers working for Hitler and thus part of a machine that between 1933 and 1945 had (according to US government estimates) seized or coerced one fifth of the movable artworks on the European continent.

Last week I went to see the openings of two remarkable and linked exhibitions in the German city of Bonn and the Swiss city of Berne, which between them tell the Gurlitt story and exhibit some of the wonders found in the Gurlitt trove.

Under the shared heading of Gurlitt: Status Report, the Bonn exhibition, subtitled Nazi Art Theft and its Consequences, is an exploration of Hildebrand Gurlitt’s evolution from interwar art lover and gallery curator to agent for the Führer’s aesthetic megalomania. And then, the war over, his evolution back into respected art dealer and connoisseur. The show follows the Gurlitt timeline, illustrating his progress with some of the most significant works discovered in his collection, from Rodin to Dürer.

The history here is as important, if not more important than the art. The web of art dealings in occupied Europe was complex, not least because Gurlitt was probably cheating everyone along the way, including his Nazi bosses. Would-be thriller writers short of a plot could find a dozen in this exhibition alone. Just follow the Monet. 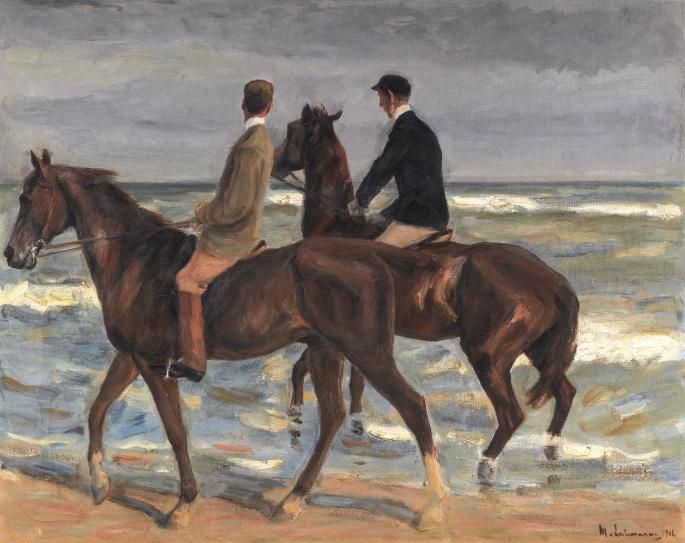 Two Riders on the Beach by Max Liebermann, 1901, has been deemed to be “looted art”

And Hildebrand Gurlitt as a character amazes Nina Zimmer, the director of the Berne art museum. In the 1920s he had “started out as a super progressive, energetic man”, a supporter of German Expressionist art, a friend of the artists themselves and a curator of some talent. “And then,” Zimmer says, “how can a guy like that cross over to the dark side and become first a collaborator of the regime and then an actual Hitler helper, one of the bad Nazi crooks, buying and selling in occupied Paris, making enormous amounts of money in those years?”

Indeed, Gurlitt, travelling around on special commission from the Führer to buy arts for the mad mega-museum the Nazi leader planned in his home city of Linz, could act with almost complete impunity. “He’s in occupied Paris,” Zimmer says, “being so full of himself, buying lots of fakes, drinking champagne, and having his mistress, going back and forth, it’s like a scene from Inglourious Basterds.”

And then, after the war, he uses his part-Jewish ancestry (one Jewish grandmother) to convince the new authorities that he wasn’t a Nazi and to let him have his art collection back. “He got people to lie for him,” Zimmer says, “and sure, there were worse people around than him, but that’s no excuse! He was a crook.”

Among the 250 exhibits in the Bonn exhibition are pieces by Maillol, Daumier, Cranach and Dürer. Yet the unique thing about the exhibition is the labelling. So far, six of the works in the Gurlitt collection (and thus not exhibited), including the magnificent Max Liebermann painting, Two Riders on the Beach, have been deemed to be “looted art” — art taken or forcibly purchased — and have been “restituted” to the successors of the original owners.

This set in train a significant effort by the German and Swiss governments and academics to trace the full provenance of the Gurlitt works. So, beside each picture and object, as well as the title and name of the artist, is a timeline of what is known about its ownership — who had it when, and how it got to be in the flat in Munich or the house in Salzburg. It is an exemplary piece of detective work and fans of the BBC’s Fake or Fortune? programme, for all that these stories represent human tragedy and loss, should find it fascinating. Often there is a gap in the provenance that might just betoken a crime.

Yet the Monuments Men aspect of the Gurlitt story is only one part of it. Because in Berne, where the subtitle on the Kunstmuseum’s exhibition is Degenerate Art — Confiscated and Sold, there is another tale, less familiar but just as compelling. When the enemies of free expression march, they march first against art. So it wasn’t only people they disliked that the Nazis tried to eradicate, but culture.

As a young curator Hildebrand Gurlitt had experienced the German nationalist distaste for almost anything that wasn’t “beautiful” in the classical sense. After the Nazis came to power in 1933, disdain turned to destruction. Works by abstract, modernist, impressionist or expressionist artists were declared “degenerate”, to be regarded as being as undesirable as physical deformities or mental illness. In 1937 the Nazis held the first of a series of “degenerate art” exhibitions mocking modern works. This was followed by the confiscation of tens of thousands of works of degenerate art from German museums and galleries. Some were destroyed, most were stockpiled with an eye to being sold abroad for foreign currency. 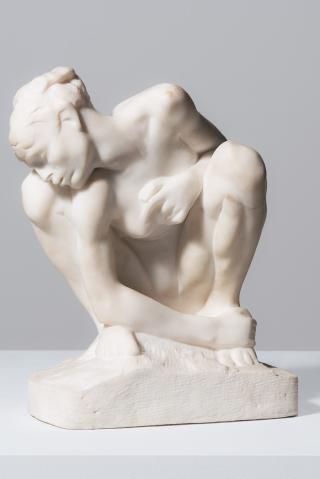 The art being produced by Germany in the first third of the 20th century — pre, post and during the First World War — was arguably the most thrilling and challenging of any country in the world. There was the searing pain of Käthe Kollwitz, the sombre brilliance of the sculptor Ernst Barlach, the savage humour of George Grosz and Otto Dix, the lyrical watercolours of Franz Marc and August Macke, the sexiness of Otto Mueller — these are just a few. And the young Hildebrand had known and supported the work of many of these artists.

When their works were in effect made illegal in Germany, Hildebrand metamorphosed into one of the main dealers buying them at a discount or swapping them for classical works, and then selling them aboard. Or keeping them. Perhaps he even regarded himself as a saviour of the artists he loved, as the Oskar Schindler of expressionism.

When Cornelius, Hildebrand’s heir, died weeks after the Salzburg trove was discovered, he left his entire estate to the Kunstmuseum in Berne, a museum he had visited a few times when he had been to see the legendary Swiss-Jewish dealer Eberhard Kornfeld. Most of the pieces and pictures the museum inherited appear not to have been looted art and most were “degenerate” works. A large sample of them form the new exhibition. 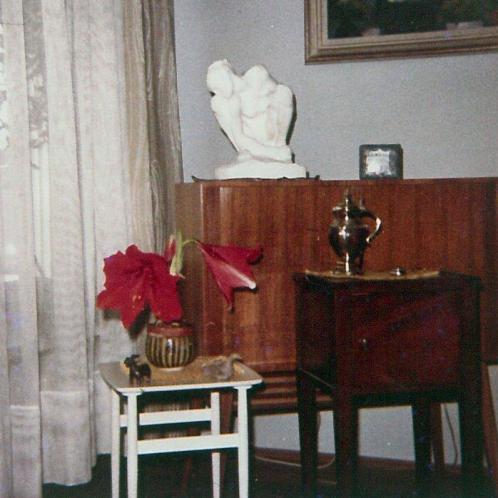 The work — much of it watercolour — is just wonderful. And, ironically, all the more wonderful for having been sequestered for all those years. Zimmer, then new to her job in Berne, recalls going to where the pictures were being stored. “One of the first works I saw was the Macke, and they opened it and I saw the blue that didn’t see a day of light and it looked so fresh, like it was painted yesterday.” Zimmer continues, “and this web of history that comes at you. You can’t help but be touched by the quality of these works and the way they were kept prisoners by not being exhibited, not being loaned, not being published.”

Among the works are several black and white drawings and lithographs by a previously more-or-less unknown female artist, who committed suicide in 1919, aged 29. She was Cornelia Gurlitt, Hildebrand’s sister.

Nearly a century later her nephew and namesake, and keeper of her artistic legacy, died confused and unhappy, baffled by the intrusion of a world he had largely shunned. So what these extraordinary twin exhibitions also show is that after great crime, corruption and tragedy comes a constellation of minor crimes and corruptions, and smaller tragedies. And then, every now and again, from a cupboard or a cabinet, emerges something of wonder.