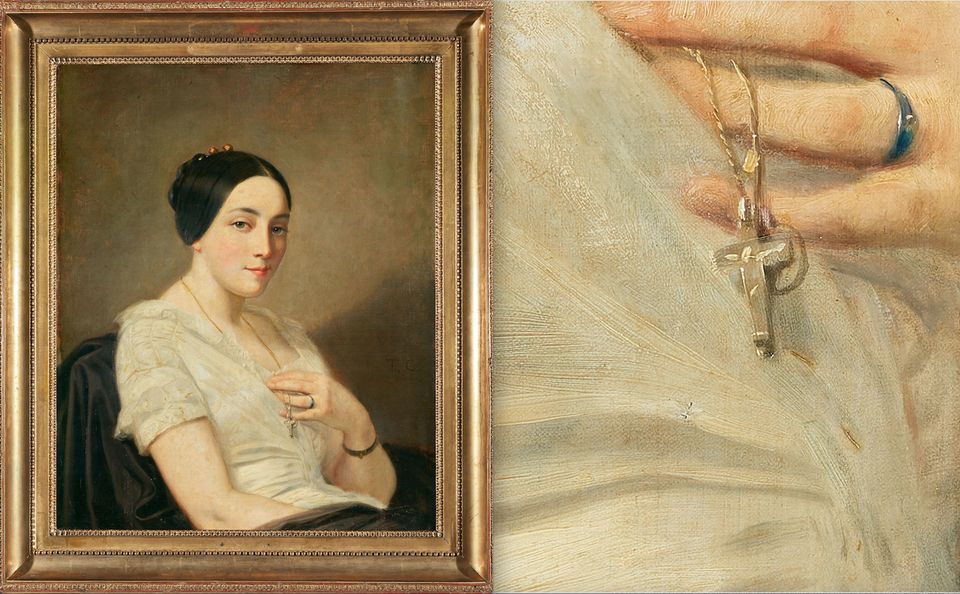 German government researchers investigating Cornelius Gurlitt’s art hoard have identified a painting by Thomas Couture as looted by the Nazis from the collection of Georges Mandel, a prominent French-Jewish politician who was imprisoned by the Nazis and murdered by a French militia in 1944.

The painting, called Portrait de jeune femme assise (Portrait of a Seated Young Woman), was identified by the Gurlitt Provenance Research Project thanks to a tiny, barely visible hole that had been repaired. This detail had previously been observed on the work by Rose Valland, an art historian and informant for the French Resistance. Valland was employed at the Jeu de Paume in Paris, where the Nazis stored looted art during the occupation of France. Unnoticed by the Germans, Valland took meticulous notes on the art that entered the building and passed the information on.

“The fact that the researchers managed to identify this painting as Nazi loot with scholarly meticulousness and persistence shows how important it is to persevere with provenance research,” says the German culture minister Monika Grütters in a statement.

The painting was probably among possessions seized from Mandel’s Parisian apartment in August 1940 in a raid by the Sonderkommando Künsberg, one of many competing Nazi organisations that stole Jewish property in France. Cornelius Gurlitt’s father, the art dealer Hildebrand Gurlitt, may have purchased it from the Paris dealer Raphaël Gérard, or he may have purchased it earlier and stored it on Gérard’s premises during the war.

Gurlitt’s hoard came to light in November 2013, 18 months after his Munich apartment had been raided by German authorities and the art was seized. The reclusive hoarder died in May 2014, bequeathing his collection to the Kunstmuseum Bern.

The Gurlitt Provenance Research Project has informed a claimant for the painting of its findings. “I hope very much that this work can be returned to the descendants of the original owner as quickly as possible,” Grütters says.

The painting is the sixth item in Gurlitt’s cache of more than 1,500 works to be identified as looted by the Nazis. Parallel exhibitions dealing with the collection and its history are opening next week at Kunstmuseum Bern (Gurlitt Status Report: Degenerate Art, Confiscated and Sold; 2 November-4 March 2018) and the Bundeskunsthalle (Gurlitt Status Report: Nazi Art Theft and its Consequences; 3 November-11 March 2018) in Bonn.