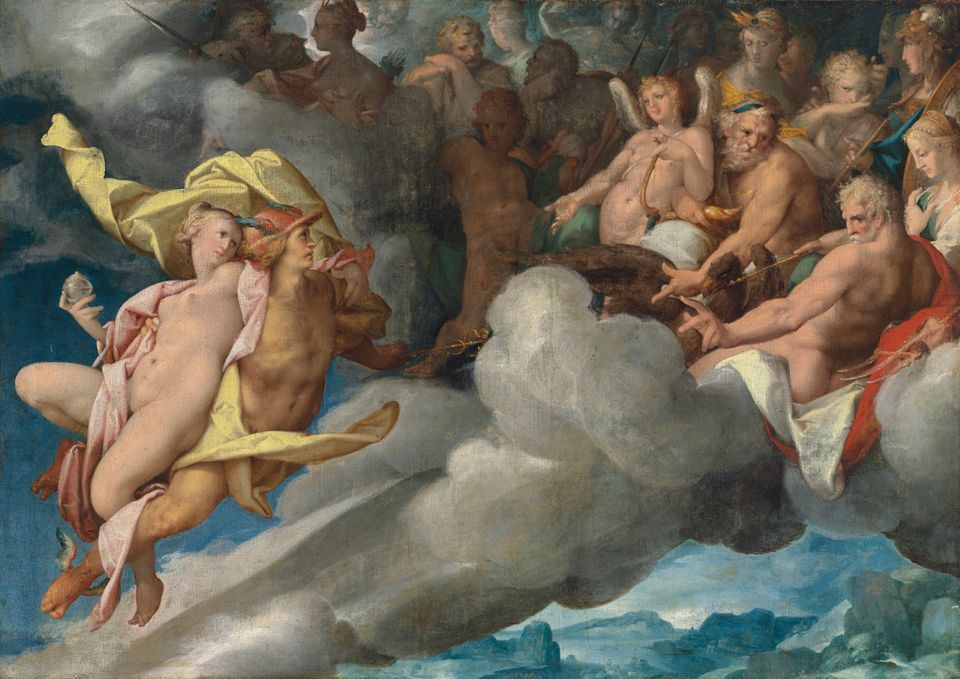 A painting by the Mannerist artist Bartholomäus Spranger long thought to be lost will be sold at Christie's Old Masters evening sale in London on 7 December, after the private German owner reached a settlement with the heirs of a prominent Jewish art historian who fled the Nazis.

Mercury Conducting Psyche to the Olympus (1576) is “one of the most significant paintings by the artist still remaining in private hands,” says Henry Pettifer, the head of Old Master paintings at Christie’s in London.

It is estimated to fetch between £400,000 and £600,000. As the court painter in imperial Prague, Spranger may have given the painting to Emperor Rudolf II on his accession to the throne, says Sally Metzler, an art historian who produced a monograph and guest-curated an exhibition of the artist’s work at the Metropolitan Museum of Art in 2014.

Metzler had been searching for the painting since 1996 and believed it might be lost forever or destroyed. “Black and white snippets from old auction catalogues were all I had,” she says. Then she was contacted out of the blue by a German art owner who said he thought he might have it. After examining his photos, Metzler made a detour from her vacation in Italy to northern Germany in March 2016.

“I am really glad I made the effort,” she says. “The minute I saw it I thought—wow, this is it!”

For decades, Psyche had hung in the man’s bedroom. His father, an avid art collector, had bought the work at auction in Cologne in 1965. When Metzler confirmed its authenticity, she told the possessor—who asked not to be identified by name in this article—that the painting was claimed by the heirs of Curt Glaser. The man contacted Glaser’s heirs and a settlement, described by lawyers for both sides in a statement as “just and fair”, was achieved. Peter Raue in Berlin represented the German possessor, while the lawyer for Glaser’s heirs was David Rowland in New York.

Born in Leipzig in 1879, Glaser was an art historian and medical doctor who served in the military in the First World War. He was appointed director of the Prussian State Art Library in Berlin in 1924 and became one of the most distinguished art historians and journalists of the Weimar Republic. A significant patron and collector of Modern art, Glaser counted Edvard Munch, Henri Matisse and Ernst Ludwig Kirchner among his friends.

As a Jew and champion of “degenerate” art, Glaser was forced out of his post when the Nazis came to power in 1933 and his home was confiscated. He was also compelled to sell his art collection, personal library and home furnishings at two auctions. The Spranger painting was acquired by Wolfgang Gurlitt, an art dealer and the cousin of the Nazi-era art dealer Hildebrand Gurlitt. Glaser fled Germany, ending up in New York, where he lived until his death in 1943.

“He died when I was a baby,” says Paul Livant, Curt Glaser’s great-nephew and one of his heirs, a guitarist in New York. “He never fully emotionally recovered from having to flee Germany. My great-aunt was constantly talking about him and his life in Berlin. Curt was a major figure when I was growing up. There was a feeling of loss, but also a sense of what our roots were.”

A commemorative plaque to Glaser was unveiled last year at the State Art Library in Berlin. Hermann Parzinger, the president of the Prussian Cultural Heritage Foundation, described him as “one of the first victims of the Nazi purges” in an essay.

“It must not be that a man who contributed so much to the museums is only honoured in specialised publications,” Parzinger wrote. “It would be tantamount to a triumph for the Nazis in their attempt to annihilate people and ideas.”

Meanwhile, Psyche’s story continues—it remains to be seen where the work will end up after the Christie’s auction in London. The auction house will show the painting in New York from 27 October to 30 October. Metzler is hoping a major museum will buy it.

“Most of Spranger’s works are in public collections in Vienna or Prague,” Metzler says. “I would love for it to be in a major public collection, perhaps somewhere that doesn’t have many Mannerist works.”