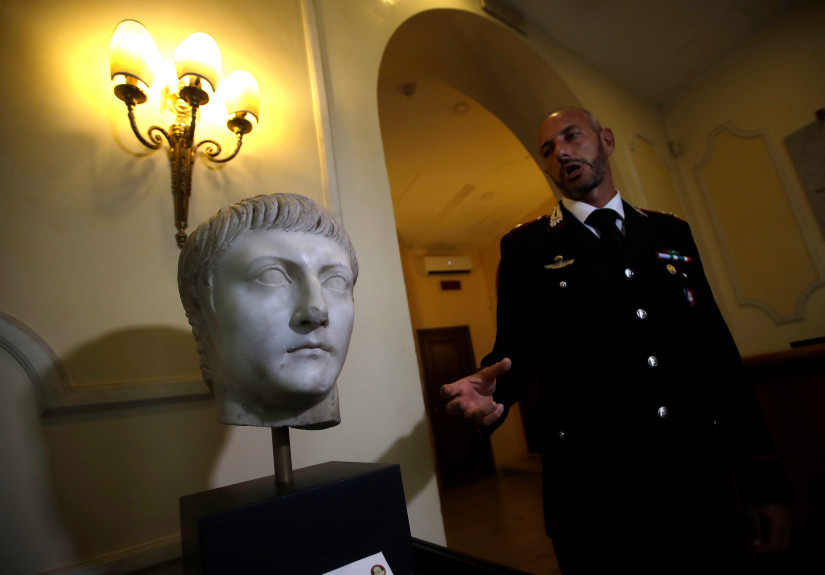 Researchers determined that piece, portraying Drusus, a general, with an aristocratic air, had been looted by Algerian soldiers from the museum in the southern town of Sessa Aurunca, near Caserta, in 1943, a chaotic time as Allied troops pressed their movement up the peninsula in the campaign against Nazi troops.

ROME — Italy is putting on display a 1st century marble head that an American museum returned after learning it was stolen during World War II from a southern Italian museum.

Major Massimo Maresca of Italy’s national paramilitary police art squad said Friday the original working assumption had been that the piece had been stolen by Nazi troops and taken to Germany, the fate of many artifacts and artworks from countries occupied by Nazi Germany.

But “we were looking in the wrong place,” said Maresca, of the Carabinieri art squad, which has an excellent record of tracking down ancient artifacts illegally exported from Italy.

Instead, Maresca said, research determined that the piece, portraying Drusus, a general, with an aristocratic air, had been looted by Algerian soldiers from the museum in the southern town of Sessa Aurunca, near Caserta, in 1943, a chaotic time as Allied troops pressed their movement up the peninsula in the campaign against Nazi troops.

A second marble head, of the emperor himself, was similarly stolen and later recovered in a separate operation.

Maresca told The Associated Press in an interview that the Drusus sculpture was believed to have been first taken to Algeria, eventually moved to France, and in 2004, auctioned off in Paris.

After realizing it wasn’t the Nazis who had made off with the statue, the police art squad discovered that “the heads had been stolen by allied French troops, specifically by Algerian troops stationed in Italy, who, at the moment of their departure following the (Allied) liberation of Southern Italy, carted away with them the two heads” along with other artifacts, Maresca said.

Eventually, the heads were sold, via France, to the U.S. antiquities markets, with the emperor’s head acquired by a private citizen and the Drusus piece by the museum, the police official said.

When the transfer of the Drusus piece to Italy was agreed upon earlier this year, the museum said “extensive research” had indicated the sculpture originally came from North Africa.

The public can admire the sculpture every Saturday in September at the Rome headquarters of the Carabinieri art squad.

Maresca said that in line with similar agreements with other foreign museums which have returned to Italy pieces that turned out to be illegally exported, the Cleveland institution would be allowed a loan of several years of some similarly valuable ancient sculpture for display.