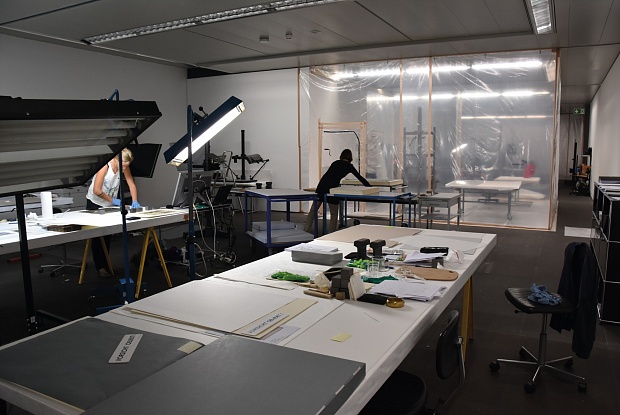 Warping, cobwebs and fungus are some of the issues faced by conservators tasked with treating the collection

Conservators at the Kunstmuseum Bern are busy mending tears and warps, and removing cobwebs, dust and corrosion from works of art which the museum inherited from Cornelius Gurlitt. Last week, the museum opened a special workshop to treat the collection before it goes on show in Taking Stock of Gurlitt: Degenerate Art—Seized and Sold, which opens in November. The public can take organised tours of the studio ahead of the exhibition.

The Kunstmuseum Bern has so far received 220 works from the hoard of more than 1,500 pieces that Gurlitt inherited from his father, Hildebrand, an art dealer who worked for the Nazis. Cornelius died in May 2014, unexpectedly bequeathing his collection to the Bern museum. The Swiss institution has said it will only accept works it knows are free from suspicion of Nazi looting, while the rest will remain in Germany until provenance research is complete.

Provenance was not the only concern about integrating Gurlitt’s collection into the museum. For decades, the art had been stashed in his Munich apartment and house in Salzburg. And while the conditions in Munich were dry, the reclusive hoarder had neglected his Salzburg home for years. In February 2014, works by Monet, Courbet and Munch were salvaged from piles of rubbish decaying in plastic bags and heaps of newspapers. Some emergency restoration measures were undertaken before Bern inherited the collection. Fungus on 16 works was tested and found to be predominantly aspergillus versicolor, which can be harmful to humans. Among the works contaminated were an oil painting of a winter landscape by Courbet and Kandinsky’s Schweres Schweben, an abstract ink on paper.

“Some works were badly affected by mildew and were structurally damaged,” says Nathalie Bäschlin, who is in charge of restoration and conservation at the museum. “The problem with these spores is that some of them are living, and they can’t just be killed without damaging the painting, but they could be reduced. We also had to ensure they don’t contaminate other works in our collection.” Conservators wore protective clothing and worked in sealed rooms to prevent the fungus spreading.  Bäschlin says it was clear that Cornelius invested in restoring the works when he inherited them in the 1960s, and that nothing had been done since. “Some of the measures used then are no longer considered appropriate,” she says. For example, Otto Müeller’s tempera painting of his wife, Maschka, had been treated with wax, she says. “We are reducing the wax layer by layer.”

Professionals and students from the University of Bern have been assisting the museum’s team of conservators ahead of the exhibition.