After 26 Years, Munich Settles Case Over a Klee Looted by Nazis 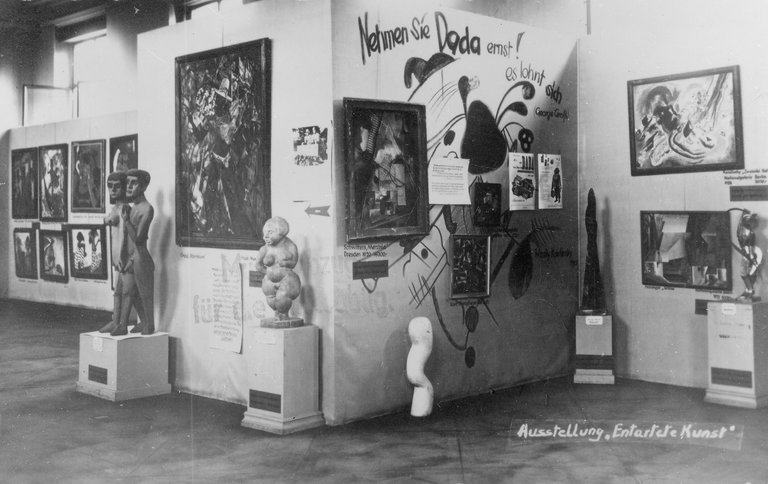 A Nazi exhibition of “Degenerate Art” at the Munich Hofgarten, 1937. Paul Klee’s “Swamp Legend” is hanging at the bottom center of the Dada wall.

BERLIN — After 26 years in court, the longest-running German legal wrangle over Nazi-looted art ended Wednesday with a settlement that will reimburse a family for the seizure of a masterpiece by Paul Klee that was once scorned as the work of a degenerate.

For decades, officials for the city of Munich, citing a variety of arguments, had resisted returning Klee’s “Swamp Legend,” a dreamlike abstract punctuated by childlike imaginings of windows, trees and crosses.

But after years of political pressure, the city agreed to a settlement under which the painting would remain in Munich’s Lenbachhaus museum but the heirs of the German art historian from whom it was taken would be paid a sum equal to its market value.

“It’s a scandal that it has taken so long, and a disgrace that we had no alternative to going to court,” said Gunnar Schnabel, a lawyer for the heirs, the grandchildren and great-grandchildren of Sophie Lissitzky-Küppers, the art historian.

Matthias Mühling, the director of the Lenbachhaus, presented the settlement as evidence of progress.

“Through the story of this painting over the last 26 years,” he said in an interview, “we can trace the change of mentality not just in the museums, but also in the legal approach, the way we think about law and justice. Law and justice are not always the same thing. This settlement is a very important achievement for our museum. This is not just an important painting by Paul Klee, it contains the whole history of the 20th century.” 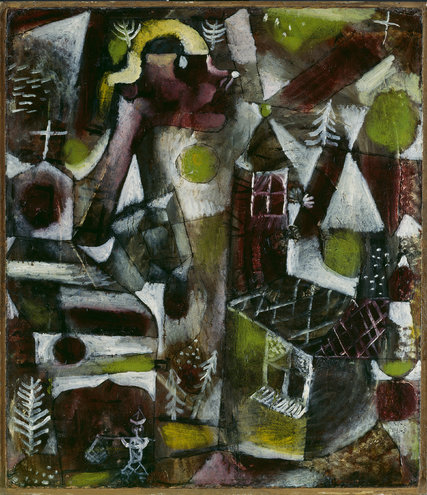 Some experts have viewed the lengthy dispute over “Swamp Legend” as indicative of a certain obstinacy on the part of Bavarian institutions toward redressing Nazi-era looting. Another painting in the Lenbachhaus, Wassily Kandinsky’s “Colorful Life,” is the subject of a lawsuit filed in March and the heirs of Alfred Flechtheim, a Jewish art dealer, are suing the Bavarian regional government for the return of eight paintings they say were looted.

“A lot of Nazi-looted art ended up in Bavaria and there is still a great deal to do there in terms of transparency, provenance research and restitution,” said Anne Webber, co-chair of the Commission for Looted Art in Europe.

Officials in Bavaria suggest the criticism is unfair.

“The Bavarian Ministry of Culture and state collections and institutions are committed to vigorous provenance research with the goal of rectifying injustices of the Nazi era,” Bavaria’s minister of art, Ludwig Spaenle, said last week after another settlement with Jewish heirs was reached.

Klee painted “Swamp Legend” in 1919, while living in Munich, and it is believed that Ms. Lissitzky-Küppers’s husband, Paul Küppers, acquired it there directly from the artist. In 1922, though, Mr. Küppers died of tuberculosis and his widow met and fell in love with the Russian Constructivist artist El Lissitzky, whom she followed to the Soviet Union in 1926 and married a year later. On emigrating, she left her art collection of 16 paintings and one sculpture on loan to a German museum, the Hanover Provinzialmuseum — among them works by Kandinsky, Piet Mondrian and Fernand Léger, as well as “Swamp Legend” and two other Klee pictures.

These artworks were among more than 20,000 seized from German museums in the virulent crusade by the propaganda minister Joseph Goebbels against art that the Nazis, no fans of abstraction or other modern touches, perceived as “degenerate.” “Swamp Legend,” in particular, was scorned in the Munich “Degenerate Art” exhibition of 1937 as the product of the “confusion” and “disorder” of a “mentally ill person.”

It was soon purchased, though, by Hildebrand Gurlitt – the father of the reclusive Cornelius Gurlitt, whose secret art hoard in Munich was confiscated by German customs in 2012. The elder Gurlitt was one of just four dealers permitted to purchase the art the Nazis hated.

The trail of “Swamp Legend” is then lost until 1962, when it was sold at auction in Cologne. After two more changes of ownership, it was acquired jointly by the city of Munich and the Gabriele Münter Foundation in 1982. 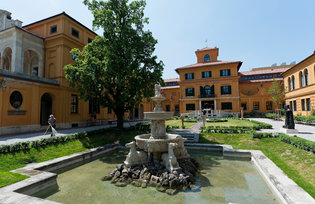 The Museum Lenbachhaus in Munich.

Ms. Lissitzky-Küppers tried in vain to reclaim her collection after the war. Banished to Siberia under Stalin because of her roots in hostile Germany, she died in poverty in Novosibirsk in 1978.

Her children and grandchildren have tried since 1992 to recover “Swamp Legend.” The city of Munich first said that as a “good-faith” purchaser who had no knowledge the painting had been looted, it had a right to keep the work. The city won a court case on those grounds in 1993.

Then in 1998, Germany endorsed the internationally agreed Washington Principles, which commit publicly owned museums to seek “a just and fair solution” with the heirs of the original owners of Nazi-looted art. Munich argued that these principles were applicable only to art taken from Jews, not works seized as part of the “degenerate art” purge.

Over the years, several German culture ministers had urged Munich to rethink its resistance to returning the painting. In 2009, then-minister Bernd Neumann wrote to Munich Mayor Christian Ude saying he was watching the discussion with “increasing concern” and suggested that, instead of dragging the case through the courts, it should be submitted to a German government panel known as the Limbach Commission, which adjudicates disputes over Nazi-looted art in public collections. The mayor rejected his proposal.

Mr. Schnabel said that, in recent years, the heirs had been able to strongly bolster their court case, which he believed played a role in the city’s decision to begin negotiating. For example, a researcher for the heirs found a document, he said, that showed the Nazis themselves had planned to return art owned by foreign private collectors that was seized while it was on loan to the museums. In the letter, dated Sept. 17, 1938, Franz Hofmann, the official in charge of disposing of the seized “degenerate” art, included the Lissitzky-Küppers paintings in a list of artworks to be returned to their owners.

More recently, the Münter Foundation, the Ernst von Siemens Art Foundation and the Cultural Foundation of the German Federal States had offered to help underwrite a reimbursement for the heirs.

The exact sum is subject to a confidentiality agreement signed by the parties, but a book published in 2009, “Lost Lives, Lost Art,” by Melissa Müller and Monika Tatzkow, reported the painting had been insured by the museum in 1992 for four million euros.

The settlement requires that wherever the painting is displayed, it will be accompanied by a sign documenting its ownership history, including its looting by the Nazis.