Painting From Goering’s Collection Is Returned to Banker’s Heirs 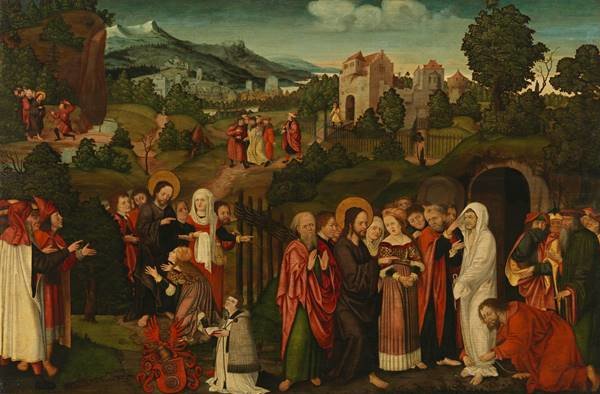 “The Raising of Lazarus” (circa 1530–1540), by an anonymous German artist, was salvaged by the Monuments Men at the end of World War II. The painting was returned to an heir, Frank Winkel, at a ceremony in Munich on Friday.

An heir of a prominent German banking family recovered a Renaissance-era painting on Friday that was looted by the Nazis and then bought by the Reichsmarschall Hermann Goering, who amassed a collection of more than 1,000 paintings.

The work, “The Raising of Lazarus,” by an anonymous German artist, was salvaged by the Monuments Men at the end of World War II before entering the Bavarian State Paintings Collection in 1961, where it remained until now. The heirs didn’t know it was there but a company that helps families recover looted art noticed several years ago that it was on a list of artworks lost during the war.

The State Paintings Collection has agreed to buy the piece from the heirs.

The family suffered persecution and expropriation at the hands of the Nazis and the Bleichröder art collection was seized and sold in May 1938 at auction in Berlin. Goering bought the painting shortly afterward from the dealer who had purchased it at auction.

Goering’s vast collection, much of which was looted from Jews, was seized by the United States military at the end of World War II and stored in Munich. About 200 of the works, including “The Raising of Lazarus,” were later turned over to the regional government of Bavaria.

Nearly 80 years after it was stolen from the family, the painting, valued at about $250,000, was returned to Frank Winkel at a ceremony in Munich. Mr. Winkel lives in Munich and is the heir of James von Bleichröder’s daughter Ellie, who survived incarceration at the Theresienstadt concentration camp.

A second beneficiary is the heir of Maria Christina von Bleichröder, the wife of James’s son Wolfgang. The heirs were represented by James Palmer of Mondex Corporation in negotiations to recover the painting.

The State Paintings Collection included the painting and its ownership history in a 2004 publication listing artworks acquired by Goering that were in Bavaria’s possession. It was later identified by Mondex, which traced the Bleichröder heirs and began helping them to recover their lost art in 2010.