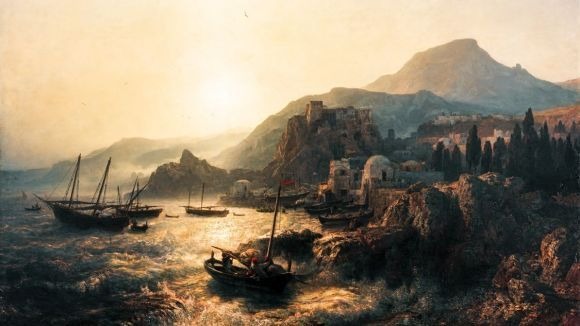 The Museum Kunstpalast in Dusseldorf pulled a painting by Andreas Achenbach from an exhibition after an ownership claim filed by the heirs of Max Stern, a Jewish dealer who was forced to liquidate his art gallery in the city before he fled Nazi Germany.

The Achenbach exhibition opened on 7 July, featuring works owned by a private collector, Wolfgang Peiffer. He acquired the 1861 painting Sicilian Landscape at a Phillips auction in London in 1999. Though it was pictured in the promotional material for the Kunstpalast exhibition, it is not on display. The exhibition is a collaboration with the private L8A museum in Baden-Baden, which included the painting in its own show last year.

The Max Stern Art Restitution Project, which is seeking to recover the dealer’s lost collection, had registered Sicilian Landscape as missing with Interpol and on the German database lostart.de. A researcher spotted it in the Baden-Baden show. On behalf of the Max Stern estate, the Holocaust Claims Processing Office in New York contacted the private collector last September. So far, neither the HCPO nor the estate has received a response.

Peiffer, who owns 300 works by Achenbach and published a book about the artist’s visit to Italy, said in a telephone interview that he believes Stern sold the painting in a “perfectly normal gallery transaction”. His lawyer Ludwig von Pufendorf said Peiffer never received the letter from the HCPO and called on the Max Stern estate to prove that Stern owned the painting and did not sell it on consignment.

“I can assure you that my client will not allow this painting to continue to be listed on the lostart.de database and will seek recourse in court to uphold his rights if necessary,” Pufendorf wrote in an email.

Stern took over his father’s art gallery in 1934, a year after the Nazis seized power. As a Jew, he was no longer allowed to practice his profession after 1935 and was forced to sell the contents of his gallery at Lempertz auction house in Cologne in 1937. Sales records show Stern sold the Achenbach painting privately that year, as his gallery was being liquidated.

He fled to London in 1938, later settling in Canada, where he again became a successful dealer. He died childless in 1987 and left the bulk of his estate to three universities: Concordia and McGill in Montreal and Hebrew University in Jerusalem. In 2002, the universities launched the Max Stern Art Restitution Project. The foundation has so far recovered 16 paintings. It is seeking around 400 works altogether.

“Our research indicates that a large number of works lost to Dr. Stern remain in German collections,” said Clarence Epstein, the senior director of urban and cultural affairs at Concordia. “In the last year alone, three paintings in the hands of private collectors in Dusseldorf, Heidelberg and Hamburg were returned to us. We’re hopeful that the possessor of the Achenbach will acknowledge the problem and reach out to us soon.”

As a means of compensating good-faith holders of Stern’s missing paintings, the Max Stern Foundation announced last year that it is developing a programme with the German Friends of Hebrew University, a charitable foundation based in Berlin. Under the programme, the foundation plans to issue those who relinquish Stern works with a tax-deductible donor’s certificate for their value. http://theartnewspaper.com/news/dusseldorf-museum-pulls-painting-from-show-after-nazi-loot-claim/?utm_source=daily_july11_2017&utm_medium=email&utm_campaign=email_daily&utm_source=The+Art+Newspaper+Newsletters&utm_campaign=d6a2ef82ad-EMAIL_CAMPAIGN_2017_0
© website copyright Central Registry 2022