Court lets US family try to get back Nazi-looted masterpiece 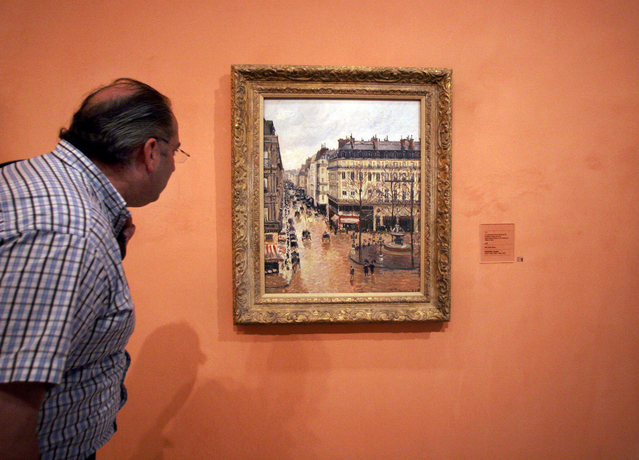 FILE- This May 12, 2005 file photo shows an unidentified visitor viewing the Impressionist painting called “Rue St.-Honore, Apres-Midi, Effet de Pluie” painted in 1897 by Camille Pissarro, on display in the Thyssen-Bornemisza Museum in Madrid.

SAN FRANCISCO (AP) — Almost 80 years ago, Lilly Cassirer surrendered her family’s priceless Camille Pissarro painting to the Nazis in exchange for safe passage out of Germany during the Holocaust.

For nearly 20 years, the Jewish woman’s heirs have been trying to get it back.

On Monday the 9th U.S. Circuit Court of Appeals ruled the family is entitled to its day in court as it makes its case as to why Spain’s Thyssen-Bornemisza Museum should hand over a painting that has been a centerpiece of its $2 billion collection since 1993.

“It was a very, very good result,” the family’s attorney, David Boies, said of the court’s reversing a 2015 ruling dismissing the family’s lawsuit. “It sent a strong message that even public authorities cannot take possession in bad faith of stolen property and then somehow gain title to it simply over the passage of time.”

In Monday’s ruling, however, the appeals court concluded the museum previously failed to establish that it did not know the painting was stolen when it acquired it from Baron Hans-Heinrich Thyssen-Bornemisza, scion of Germany’s Thyssen steel empire and one of the 20th century’s most prominent art collectors.

Lilly Cassirer’s father-in-law acquired it directly from the artist’s dealer and passed it on to her and her husband when he died.

Both sides generally agree on what happened next:

Lilly Cassirer was forced to sell the painting to a Nazi-appointed Berlin art dealer for the equivalent of $360 and exit visas for herself, her husband and her grandson in 1939. She got the visas, but the Nazis kept the money.

By the end of World War II, the work had vanished. The German government, believing it was lost, paid Cassirer $13,000 in reparations in 1958.

In 1999 a friend of her grandson, Claude Cassirer, who had fled Germany with Lilly, saw a photo of the painting in a catalog and contacted him. He quickly learned it was hanging in the museum in Madrid.

“He was completely stunned because we thought the painting was gone,” his son, David, told The Associated Press last year.

He added that the family went through diplomatic channels to ask for the painting’s return but was rebuffed.

“What they basically said was, ‘Go ahead and sue us,’ ” he recalled angrily on Monday.

After Claude Cassirer died in 2010, his son took over the litigation. He said he’s hopeful Monday’s outcome will lead to the work’s return. He’s not sure what the family would do with it, although he said he believes it should be displayed publicly. It has been appraised at more than $30 million.

Thyssen-Bornemisza acquired the work for $275,000 in 1976 from a New York gallery owner. It had been sold and resold by various U.S. collectors before that.

The baron eventually turned his collection of more than 700 paintings over to Spain, which created a nonprofit foundation to run the museum it named for him.

Cassirer disputes that, saying it should have been obvious to museum officials by the 1990s that they had acquired a Nazi-looted work. “They had very sophisticated curators and experts that certainly were seeing my family’s gallery label on the back of this painting,” he said.