PASADENA, Calif. (CN) – The Ninth Circuit on Monday reversed a ruling in favor of a Spanish art foundation claiming ownership of an impressionist painting, because the foundation had not convinced the court that it did not know the painting was stolen by Nazis when it acquired it. 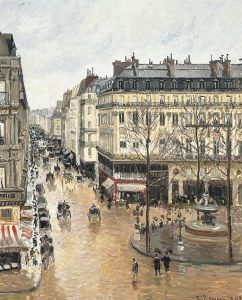 The court’s ruling is a significant victory for the great-grandchildren of Lilly Cassirer whose Jewish family had owned the Camille Pissarro “Rue Saint-Honoré, Après-midi, Effet de Pluie,” a 1897 oil on canvas of a rain-drenched Paris street.

As she fled Nazi Germany, Cassirer was forced to sell the Pissarro to a Nazi art appraiser to secure papers, and he offered her well below market value for the piece. In 1951, the Frank Perls Gallery of Beverly Hills acquired the painting after it was smuggled from Germany, Cassirer’s relatives said. The painting changed hands several times before it ended up with Baron Hans Heinrich Thyssen-Bornemisza in Spain.

In the early 1990s, the Thyssen-Bornemisza Foundation bought hundreds of works of art – including the Pissarro – for $338 million, with funding from the Spanish government. The painting is displayed in the Museo Thyssen-Bornemisza in Madrid.

Cassirer’s grandchildren David and Ava filed suit more than a decade ago, claiming when the foundation came into possession of the painting it knew or should have known the Nazis had looted it.

But in June 2015, U.S. District John Walter Los Angeles ruled that the Thyssen-Bornemisza Foundation had properly acquired title to the painting under Spanish law.

In a 61-page ruling published on Monday, the Ninth Circuit reversed Judge Walter by finding his reading of Spanish law was too narrow and that an accessory to the theft of a painting “can include someone who, with knowledge that the goods had been stolen from the rightful owner, received stolen goods for his personal benefit.”

Because the foundation did not make clear that it did not know that the painting was stolen, Walter was wrong to rule in its favor, Circuit Judge Carlos Bea wrote in the opinion.

Nazis frequently looted Pissarro paintings and 46 of the artist’s paintings have never been recovered, according to court records. There was also evidence the foundation failed to create a paper trail that would have established prior owners.

The $338 million the foundation paid for the works of art was well below the estimated value of between $1 billion and $2 billion, according to the ruling.

“Although TBC [Thyssen-Bornemisza Foundation] offers a number of innocent explanations for this below-market price, this fact may indicate that TBC knew the painting and other works in the collection were stolen,” the opinion states.

The appeals court also found the Holocaust Expropriated Art Recovery Act of 2016 gave the Cassirers six years from the date they discovered the location of their great-grandmother’s painting to start a legal claim.

The Cassirers discovered the painting was in Spain in 2000, and filed their lawsuit five years later – making their claims timely, Bea noted. The judge also ruled in favor of the family even though the German government had compensated Lilly Cassirer for her loss in 1958. The foundation argued that that had ended its status as a looted work of art.

Lilly Cassirer received 120,000 Deutsch marks under the settlement, according to the court records. The painting has since been valued at $20 million.

Attorneys for the Thyssen-Bornemisza Foundation and the Cassirers could not immediately be reached for comment.