In July 2013 during an emotional visit to Yad Vashem, Holocaust survivor Moshe Hofstadter (Ramat Gan, Israel) received four books that belonged to his father Avraham who was murdered in the Holocaust. The books were sent to Yad Vashem by Dr. Christoph Schlegel, an Austrian grandson of Nazi officer and Stadtkommissar Herbert Huller who in 1941 was stationed in Rzeszow, Poland. Huller most likely acquired the books from one of the warehouses which contained stolen Jewish possessions. Huller was sent to a prison camp for high-ranking Nazi officers in Wolfsberg for two years immediately following the war. He died in 1978. The books were discovered by his grandson in 2010, a few years after Huller’s widow (Schlegel’s grandmother) moved out of her house and into a nursing home in 2007. 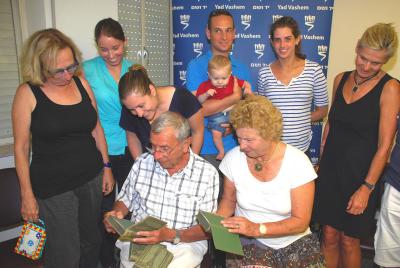 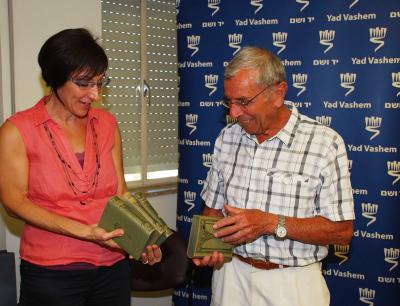 Initially unaware of the name stamped on the inside cover of each of the four books, Schlegel eventually noticed the name “Abraham Hofstadter” printed on them and in May 2013 began to research the person behind the name. Searching Yad Vashem’s online Central Database of Shoah Victims’ Names he discovered that Abraham Hofstadter was a Jewish merchant from Rzeszow, Poland who was murdered in the Holocaust. 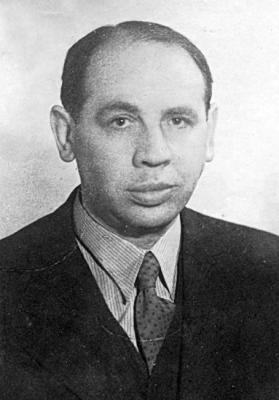 Commemorating his memory, Abraham’s son Moshe completed a Page of Testimony documenting his father’s murder, and as is customary left his contact information. When Schlegel searched the Internet for information on Abraham Hofstadter he discovered the Page of Testimony and contacted Yad Vashem’s Shoah Victims’ Names Recovery Project for assistance in reaching out to any surviving family that Abraham Hofstadter may have had, in hopes of returning the books. 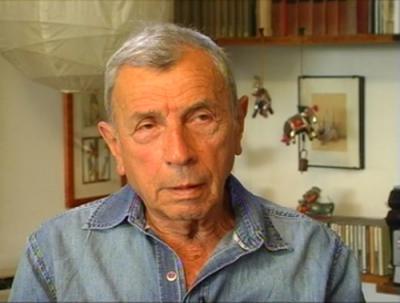 Thanks to the information on the Page of Testimony, Yad Vashem was able to put Moshe and Schlegel in touch and the two have been in correspondence ever since. Moshe, 88, is the son and sole survivor of his immediate family. As a boy he was imprisoned in the Lvov Ghetto and survived the Holocaust by working under a false identity; eventually he immigrated to Israel after the war.

On Wednesday, July 10, 2013 Yad Vashem presented Moshe with his father’s books on behalf of Dr. Christoph Schlegel. “These are just a few books which I want in the right hands,” he wrote when he contacted Yad Vashem for assistance in finding members of Avraham Hofstadter's family. “I know the feeling of touching something a person you loved has touched and used.”

Emotionally, Moshe paused as the books clearly brought back good memories of his father from before the war, proudly describing him as an active Jewish and Zionist leader in the community. “My father had a very big library and spoke German, Polish and Yiddish.”

“This is the only thing I have from my father; I have nothing else,” said Moshe upon being presented with the books at Yad Vashem by Manager of the Shoah Victims’ Names Recovery Project Cynthia Wroclawski during an emotional gathering with his family. “I’m very glad to have them.” 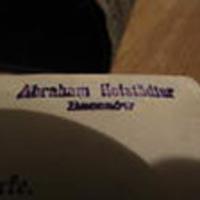 Abraham Hofstadter's name written on the inside cover of his books 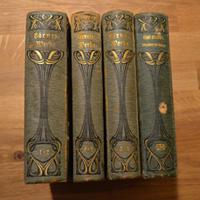