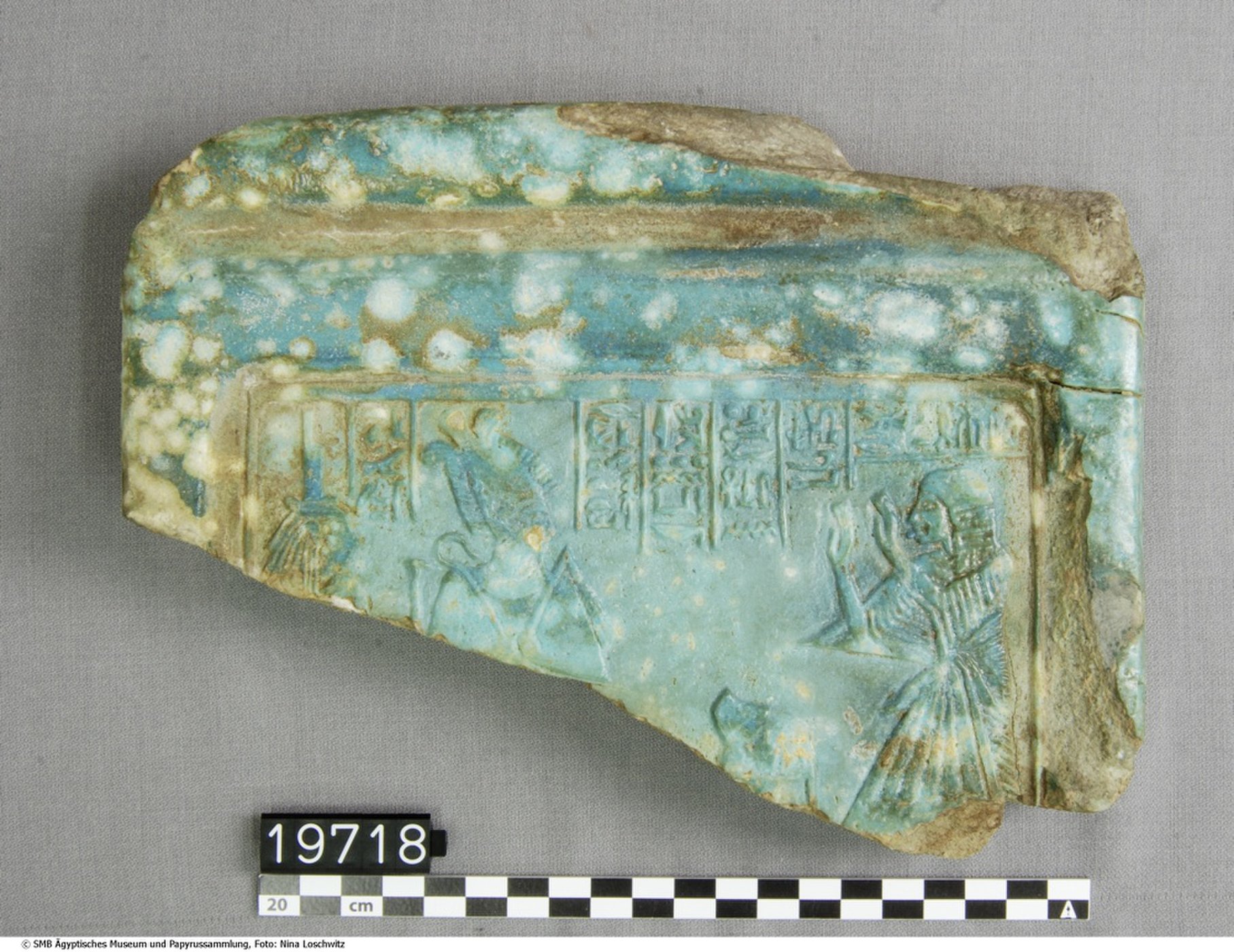 A vivid, turquoise-colored carving from ancient Egypt has been returned to a Berlin museum more than 70 years after it was thought to have been lost during World War II.

The Prussian Cultural Heritage Foundation, which oversees Berlin's state-run museums, announced that the stone slab fragment had been found in the Kelsey Museum of Archaeology at the University of Michigan in Ann Arbor.

The stone is covered with a blue Egyptian faience glaze, and it depicts Ptahmose, the mayor of Memphis under Ramses II, the warrior king and prolific monument builder who ruled during the 13th century B.C. Though the slab is broken, Ptahmose is still visible, raising both hands in a gesture of worship before the gods Osiris and Isis. [See Photos of Looting in Egypt]

Dutch Egyptologist Nico Staring, currently a visiting scholar at Leiden University, matched this object in a historical photo from Berlin's Neues Museum with a new photo from the Kelsey Museum. Staring informed the curators of both institutions of his discovery, and eventually, the Kelsey Museum decided to return the stone object to Berlin, where it will go on display beginning in mid-June. 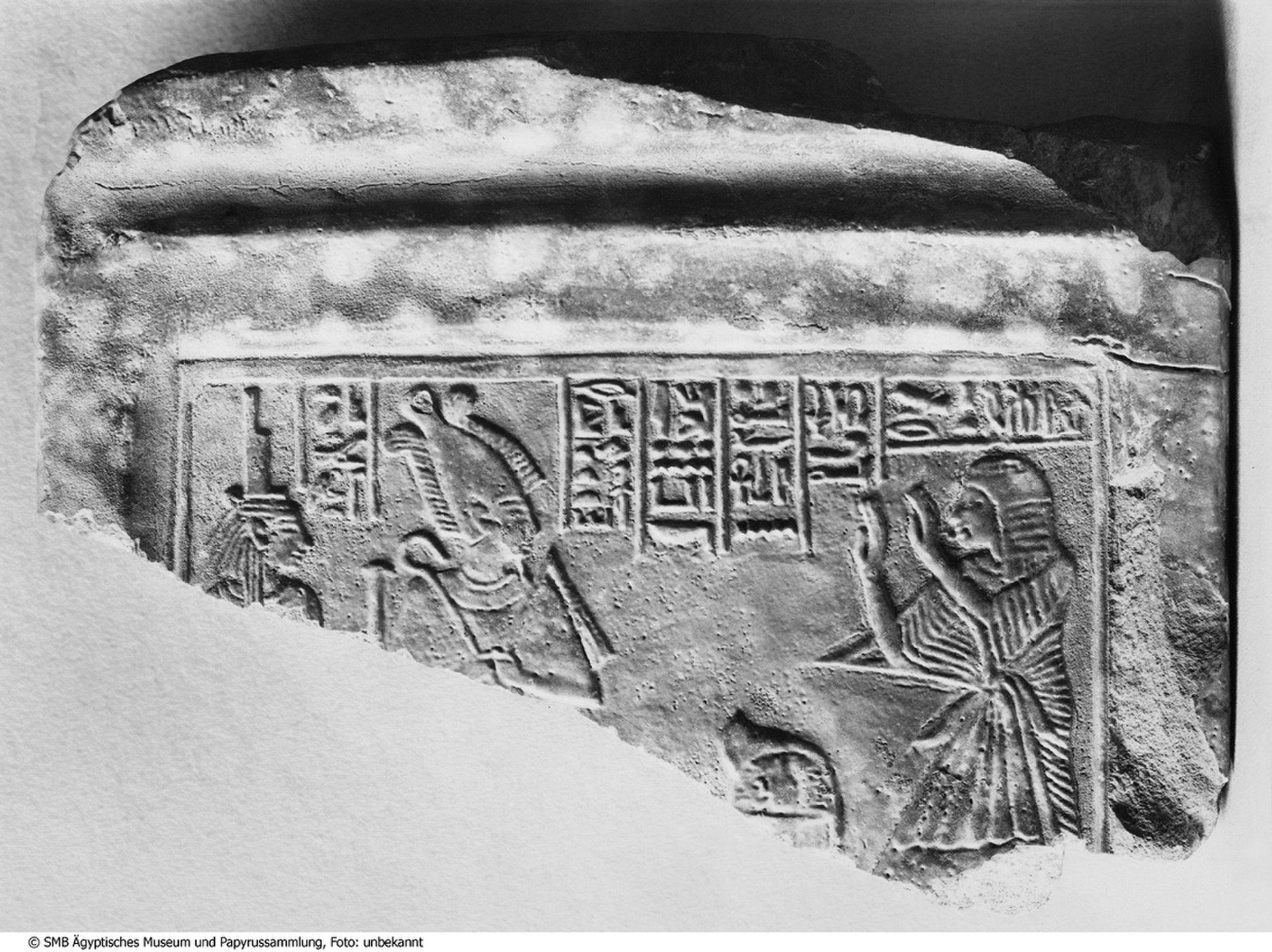 This ancient Egyptian artifact missing from Berlin since World War II has been discovered in Michigan.

Hermann Parzinger, president of the Prussian Cultural Heritage Foundation, said in the statement that the return was a "noble gesture."

"Now, after more than 70 years, it will once again take its place in the permanent exhibition," Parzinger added.

The Neues Museum was badly damaged by Allied air raids during World War II. Then, the building was left in ruin in the former Soviet-occupied section of Berlin. It didn't reopen until 2009, after a major renovation.

When the museum was closed at the beginning of World War II, this Egyptian stone slab —which had been bought from an English collection in 1910 —was left hidden inside a sarcophagus. It was recorded as missing after the war.

Strangely enough, the artifact had been given to the Kelsey Museum by Samuel Abraham Goudsmit, a Dutch-American physicist (and antiquities collector) who worked on the Manhattan Project. Goudsmit was in charge of the Alsos Mission, which was a secret U.S. project to investigate enemy scientific developments during World War II, specifically focused on the Germans' nuclear weapons program. Goudsmit had acquired the carving from a private collector in Germany in 1945, according to the Prussian Cultural Heritage Foundation.

The Nazis famously looted art collections in Europe during World War II, but art collections in Berlin also suffered big losses during the turmoil of war. Fires and bombing destroyed artworks that had been kept in safekeeping. Other objects were looted, and some were hauled off by Soviet troops after the war. Recently, art historians located 59 Italian Renaissance sculptures from Berlin's collections,including works by Donatello, in the Pushkin Museum in Moscow.

This return isn't the first time the Neues Museum will display art thought to be destroyed during World War II. In 2010, construction workers who were digging a subway line in the center of Berlin stumbled upon a cache of modernist sculptures that the Nazis had deemed "degenerate art." Archaeologists recovered 11 sculptures that then were prepared for an exhibition.