Case of Venetian masterpiece looted by Nazis closed 80 years on

April
The Guardian 27 May 2017
By Dalya Alberge 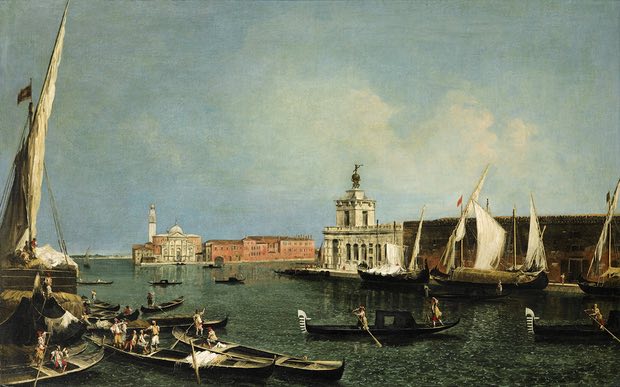 An 18th-century Italian masterpiece is to be auctioned by Sotheby’s in London almost 80 years after it was looted by the Nazis. The magnificent Venetian view, painted by Michele Marieschi in 1739, belonged to a Viennese Jewish family who fled Austria in 1938 following Nazi Germany’s annexation of the country.

Heinrich and Anna Maria Graf escaped to America with their five-year-old twin daughters, Eva and Erika. After the war they searched in vain for the painting, which depicts two of Venice’s foremost landmarks, the Punta della Dogana (customs house) and San Giorgio Maggiore.

Graf died in 1976 and his wife 10 years later. However, their family continued the search and in 1998 discovered that Christie’s knew of the painting’s whereabouts but could not breach client confidentiality. The family pursued legal action through both the US and British courts, but their attempts to contact the “possessor” were rebuffed. 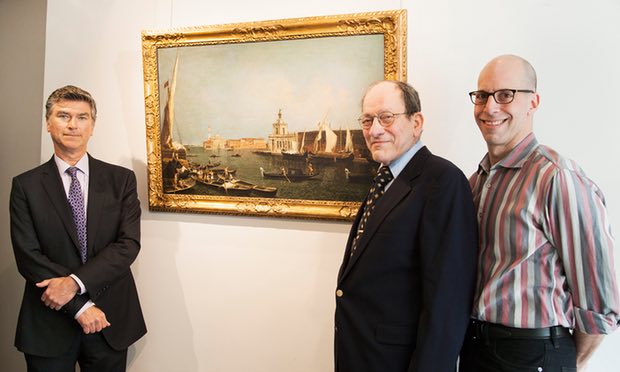 After years of negotiation, a settlement has now been achieved on the family’s behalf by Christopher Marinello, a lawyer and founder of Art Recovery International, a leading specialist in the recovery of stolen and looted art.

He said that the terms were confidential, but Stephen Tauber, the Grafs’ son-in-law, told the Observer that the painting had to be sold to allow the current owner to receive a significant share of the proceeds. The picture is likely to fetch between £500,000 and £700,000 at Sotheby’s on 5 July.

The painting was bought by a British man in good faith 60 years ago from a London dealer, who had in turn bought it from another dealer in 1952.

Andrew Tauber, the Grafs’ grandson, said: “The settlement means that the painting can finally come out from the shadows where it’s been hidden since its theft in 1940 by the Nazis. That’s a good thing for everyone.” The family would have preferred to see their ownership of the picture “recognised categorically”, either seeing it returned outright or donated to a museum, he said: “But that wasn’t in the cards.”

Marieschi, whose works also hang in the National Gallery, is admired for the rich colour and shimmering light effects of his paintings. The Graf picture – which spans 62.4cm x 98.4cm – is a panoramic scene with gondolas in the foreground. Its idyllic composition contrasts dramatically with the picture’s turbulent history. The Grafs acquired it in 1937, abandoning it with other possessions less than a year later when they made their escape, paying a substantial “exit tax”. They reached Italy and then France where, following the outbreak of war in 1939, Heinrich Graf was interned in the notorious Camp Gurs near Pau. His wife eventually obtained immigration visas to get the family to the US in 1941. Rebuilding their lives, Graf returned to his former career as an investment banker.

Andrew Tauber said: “Whatever hardships my grandparents and parents suffered, they’re the lucky ones. They got out with their lives.”

But he remembers his grandfather’s efforts to see his beloved painting again: “[It] was sold at a sale to which only high Nazis and their friends were invited. We don’t know what happened to it between 1940 and 1952 when it then resurfaced in London.”

The family feels let down by the art trade. Stephen Tauber said that the painting had been listed as stolen in 1946, before London dealers acquired it: “It was in the public record. They could easily have found out that it was stolen. They didn’t bother.”

His son described Christie’s refusal to divulge details of its whereabouts as “obviously disappointing. [It] delayed our recovery by quite a number of years.”

Marinello said: “I strongly encourage collectors, dealers and institutions to bring known or suspected Nazi-looted works out from the shadows and resolve these disputes discreetly without the need for costly and embarrassing litigation.”

He added: “There are too many of these cases out there that have not been resolved. They’re hiding the paintings. I know where they are – in Vienna, in Mexico, in Germany… I want people who have such looted paintings to say, ‘we might as well deal with this problem’.

“Here we have a good-faith purchaser who had no idea this was stolen, bought it from a dealer who may have known there was a problem but didn’t tell anybody. So you’ve got to take the legal claim and match it up against the moral claim…There’s a huge moral claim here.”

Andrew Tauber, whose mother, Erika, died in 2012, said that her twin, Eva, was “pleased that we have finally reached a resolution”.